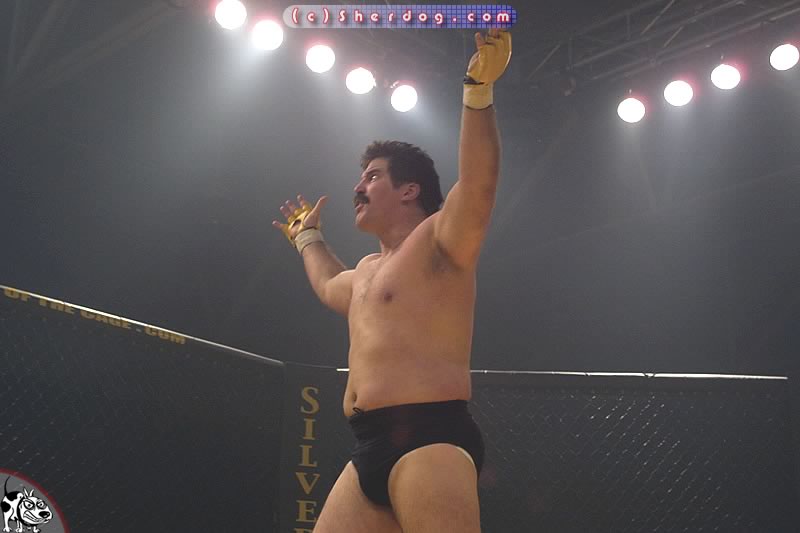 November marks the UFC’s 20th anniversary, and any trip down memory lane must include Dan Severn.

“The Beast” brought wrestling to the Octagon in 1994 and went on to a career packed with more than 100 victories. In November 2011, Severn joined the Sherdog Radio Network’s “Rewind” show to reflect on his journey.

Severn on the transition from amateur wrestling to pro wrestling to shootfighting: “I first did the professional wrestling here in the states, used my real name, used my real amateur wrestling credentials, and a gentleman happened to be on the card from Nashville, Tennessee. He asked me if any of [the background] was legit. I said yes it was and he said, ‘You ought to be over in Japan doing this thing called shootfighting or shootwrestling.’ I had never heard of it before. I gave him a business card, an athletic resume. Three days later I get a phone call. Ten days later I’m down in Nashville for a tryout. Thirty days later I’m in Tokyo, Japan, in front of roughly 12,000 people, getting ready to do my very first shootfighting or shootwrestling match. I didn’t have a clue as to what I was doing. All I know is my Asian opponent kicked me half a dozen times really, really hard. I grabbed a hold of him and flung him all over the place, dismantling him in the process, much to the crowd’s delight, and that was my inauguration into the world of shootfighting.”

On his introduction to Mick Foley, known at the time as Cactus Jack: “The first time I watched Cactus Jack was over in Japan, and he’s doing a thumbtack match. I’m actually watching off to the side, so the public doesn’t see me. They’re out there and they’re just doing all kinds of stuff -- clotheslines and being bodyslammed and the whole nine yards. Match concludes and I go back in and I’m sitting down. He comes on back and … they’re pulling his shirt out, and as they’re pulling his shirt out, you’re hearing tick-tick-tick-tick-tick. You’re hearing all these metal things hitting the floor, and a couple of them roll towards me and I bend over and pick it up and I’m thinking, By God, these are real thumbtacks. Then when they finally cleaned his body off enough so that he could actually sit down on a bench, I watched them extract probably another 20, 30 thumbtacks out of his head and face. The first words I ever spoke to him was, ‘Hey Cactus, how often do you get a tetanus shot?’ He looks over at me and he goes, ‘Every year, Dan. Every year.’”

On his meeting with Art Davie, one of the UFC’s creators, to discuss fighting: “I think the very first thing he said to me was, ‘You do realize what we do is real, don’t you?’ I said, ‘Yes, I do.’ Then he [asked], ‘What’s your professional fight record?’ I said I did not have one and he said, ‘Well, what’s your amateur fight record?’ I said I didn’t have one of those either. Then he was kind of like, ‘What are your skills?’ almost like talking down to me. I said, ‘I’ve been an amateur wrestler for 26 years.’ Then he said, ‘Well, there’s a lot of rules and regulations [in wrestling].’ I felt like he was getting ready to blow me on off right there. I just said, ‘Yeah, that’s true there, Mr. Davie, but you’d be surprised what you can do when you have a foreign opponent on foreign soil and have a foreign referee. It will be the closest thing you’ll probably ever see to one of your UFC-style matches.’”

On violently suplexing Anthony Macias in his UFC debut: “I was facing him, what’s known as a belly to belly. I locked around his waist and I was going to launch backwards … and he would have landed face-first, but he was coated in baby oil. You would have thought that someone picked him up by the ankle and dipped him in some baby oil and stood the man out there. My arm slipped from his waist. The only thing that stopped it was my arm hitting up into his armpit. The first throw I did, I actually landed on my own back and head in the process. I ate a lot of elbows in the course of that match. By the time we came up to our feet, I took an elbow shot to my face and that’s when I thought, I’m going to throw this guy in a very hard belly-to-back suplex. I threw the first one and he hit pretty hard and he stood back up and I ate one more elbow in the process. In my mind I’m thinking, ‘You think you landed hard that first time? I’m going to put you through the mat the second time.’ … It turned out that he hit so hard on the second impact that his own knee came up and hit himself in the forehead and cut himself open.”

Listen to the full interview (beginning at 20:35).