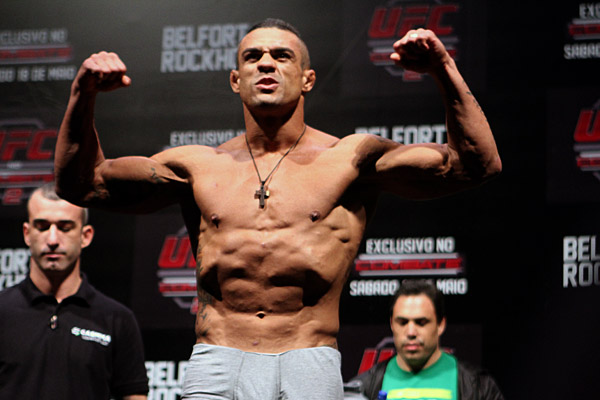 Vitor Belfort delivered a thrilling finish when he knocked out Luke Rockhold at UFC on FX 8.

After drilling Rockhold with a spinning kick, the Brazilian followed up with punches for the KO 2:32 into the first round.

In an interview with the Sherdog Radio Network’s “Rewind” show, UFC veteran Javier Vazquez broke down the setup and much more.

On Belfort throwing the spinning kick earlier in the fight and then landing it the second time: “I didn’t expect him to throw it a second time. That’s why I was so surprised. Sometimes guys do that and they’re just slightly out of range and they just do it to kind of give the other guy a different look, but when he threw it again, he was definitely trying to hit him with it. It just so happened that the first one was off angle. Luke Rockhold was holding his hands down pretty low, particularly his left hand, and that’s what ended up hurting him. The reason he got hurt so bad is he didn’t see the kick at all. It just kind of caught him completely by surprise. That’s why he ended up getting dropped by it besides the fact that it was actually perfectly placed. He didn’t see it at all -- that was the biggest problem.”

On throwing a low-percentage technique like a spinning kick: “A lot of times it’s to throw the guy off and to keep the guy on his toes. You’re being a little bit unpredictable. Another reason is to see how they react. Maybe Vitor saw something? Maybe [Rockhold] was dropping his left hand, for example? He knows the next time he’s going to throw the same technique, the same thing’s going to happen. If he makes an adjustment, maybe he steps off to his left prior to throwing the kick, kind of cut him off prior to throwing the kick, he’ll have a better chance of actually landing the shot. It kind of just depends. Some guys will throw it and try to hit the guy with it. Some guys will throw it and say, ‘What’s he going to do? Is he going to step back? Is he going to cover up? Is he going to drop his hands and try to catch the kick?’ It’s just to see what the guy does.”

On setting up the second kick: “If Vitor had thrown that kick right after he had thrown the first one, then it would have never landed. But the fact was he mixed it up. He circled around. He threw some punches, whatever the case was, and then he kind of made Rockhold forget about the kick and then he threw it again. It’s real important that if you come close to something like that, you don’t just throw it right away. The same thing happened with [Josh Thomson against Nate Diaz]. Thomson threw two or three of them, but if you look at the separation and time between the kicks, they weren’t right away. They were like a minute, two minutes later, three minutes later because then the guy tends to forget about that.”

On Belfort’s finishing skills: “The problem with Vitor is, he hits you one time and I don’t think there’s a better finisher. I mean Anderson [Silva] maybe. He’s so fast and he’s so accurate with his strikes that you don’t want to get hit with that first one because you’re going to get 15 more two seconds right after.”

On spinning kicks: “They’re hard to do. They’re hard to pull off. The guys that can do it are guys like [Jose] Aldo and [Anthony] Pettis and [Edson] Barboza -- freak athletes that are incredible strikers to begin with. That’s why it’s so surprising that Vitor did it. Not to say he’s not an incredible striker, but he’s definitely getting better at aspects of his game. That’s two in a row. That’s not an accident.”

On training spinning kicks: “You can’t be throwing that stuff in sparring. You could really hurt somebody. How are you drilling it? I’m not like a capoeira guy or anything like that. Even when I would throw spinning back kicks and stuff, I was throwing them like 30-percent power because I didn’t want to hurt my partner. How do you drill the precision to land that kick? I don’t know.”

On the power in the kick: “It’s almost like you’re swinging a hammer, but he’s doing it from the hip. … When you’re throwing a punch or even a spinning back fist, it’s nothing like a heel kick. It’s ridiculous. It’s crazy power. It’s like getting hit in the side of the head with a bat.”

Listen to the full interview (beginning at 1:45).