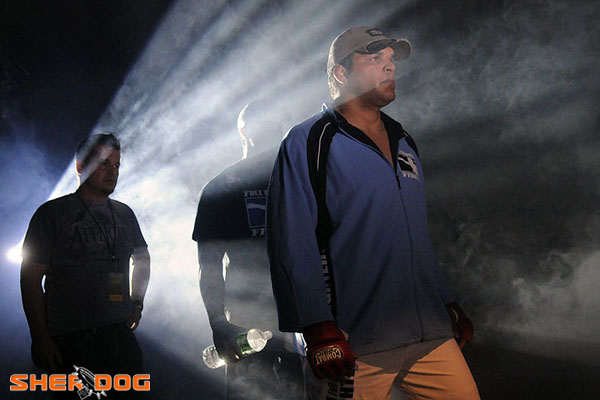 With November marking the UFC’s 20th Anniversary, the Sherdog Radio Network’s “Rewind” show marched back through every single event.

Veteran journalist Dave Meltzer joined host Jack Encarnacao to discuss UFCs 11-20. Here are just a few stories and notes from the “Dark Ages” of the UFC.

Meltzer on UFC 12, which was forced out of New York at the last minute and relocated to Dothan, Ala.: “They chartered a bunch of jets. They flew the people they could, who were needed, down to Dothan. They got the show in. They were still setting up the ring when the pay-per-view started. … All the fighters were up all night. It was literally the night before. They got in at I don’t know? Was it like four in the morning? It was something crazy. They got to the hotels at five in the morning, and then these guys all had to fight the next day. It was a complete disaster. The idea that this show ever happened is like a miracle.”

On Tito Ortiz, who debuted at UFC 13: “Did I see a star quality in him? Yes, absolutely. There was something about him, but a superstar and as big as he became? I can’t say I saw it in that one. Later, when he was fighting Jerry Bohlander, then I kind of could see it.”

On Mark Kerr, who won the heavyweight tournament at UFC 14: “At that point in time, I think everybody kind of thought that Mark Kerr was going to be ‘it.’ He looked so physically impressive. He just seemed more athletic than Mark Coleman. … You remember a couple of years later when they had the 2000 Pride tournament -- Mark Kerr was the guy who was the favorite to win the whole thing, not Mark Coleman. Again, at this point, people thought Mark Kerr was the No. 1 guy in the world. … He was brought in to be that number one contender and the next guy to go in there with Vitor [Belfort] and with Coleman.”

On Maurice Smith, who upset Mark Coleman at UFC 14: “This had been a grappling-dominated sport. Maurice Smith was a kickboxer. I don’t think that people really thought that he had much of a chance against Coleman. They thought there’d be a takedown and that would be it. Mark got tired and Maurice kind of got in his head, I think, a little bit by saying he hit like a girl, so the guy expended even more energy early and burned himself out. … This was the first time a striker had essentially won a UFC world championship. Dan Severn, Mark Coleman, Royce Gracie, Ken Shamrock, Kevin Jackson … everybody that had ever really won anything had been a wrestler or a submission guy.”

On UFC Japan: “The main event on this show, when it was sold, was supposed to be Nobuhiko Takada against Ken Shamrock. They had come to WWE, offered an incredible amount of money, several hundred thousand dollars, where WWE would get a big cut. They went to Ken: Ken can you beat Takada? And Ken said, I absolutely can beat Takada. Because they didn’t want Ken losing. Then it fell apart. What fell apart was that they wanted Ken to lose -- the Japanese, not UFC. The UFC matchmakers had never fixed a fight, but the Japanese were running the show and they wanted to build Takada’s name off of Ken, and when Ken said he could not lose this fight, he was not going to lose the fight, all of a sudden Takada was injured.”

Listen to the full interview (beginning at :55).