NASHVILLE, Tenn. -- Strikeforce middleweight champion Jake Shields weathered the storm against two-time Olympian Dan Henderson, only to have the afterglow of his victory stolen by an ugly post-fight confrontation between his camp and Jason “Mayhem” Miller.

Shields kept his stranglehold on the Strikeforce crown, as he defeated Henderson by unanimous decision in the Strikeforce “Nashville” headliner on Saturday at the Bridgestone Arena. Scores were 49-46, 49-45 and 48-45 for Shields, who has won 14 consecutive fights.

Afterwards, Miller entered the cage and interrupted Shields’ postfight interview to ask for a rematch, resulting in a melee that featured Strikeforce welterweight champion Nick Diaz and his brother, UFC welterweight Nate Diaz.

“I really apologize for that,” Shields said, though the blame might not be his own. “That’s out of my character. He got me when my emotions were running high. He came up in my face, came up talking crap. Unfortunately I pushed him. I overreacted.”

The near riot forced CBS to cut to a commercial. It was an embarrassing scene for Strikeforce and may not bode well for the promotion’s future on the network.

Victory did not come easy for Shields. Henderson dropped him with his patented right hand in the first round and followed up with punches on the ground that nearly ended the fight. Shields worked a leg lock, however, and recovered, only to be met with a brutal right uppercut as he tried to regain his footing. It highlighted a lopsided first round for the challenger.

“In the first round, he gave me the worst beating I’ve ever had in my life,” Shields said. “I was dizzy. I didn’t know where I was the first minute.”

Shields turned the tide in the second. He took down Henderson, mounted him and threatened to finish him from the top. The rest of the fight followed a similar tune, Henderson unable to stop takedowns and Shields outclassing the challenger on the ground. Shields closed strong, as he mounted Henderson three times in the fifth round and threatened him with an arm-triangle choke and a kneebar.

“Henderson’s a true legend,” Shields said. “I’m glad to have beaten him.” 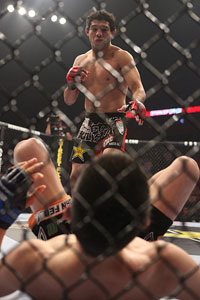 Dave Mandel/Sherdog.com
Melendez dominated Aoki.
Gilbert Melendez bullied his way to a unanimous decision over Japanese superstar Shinya Aoki, retaining the Strikeforce lightweight championship in a near-flawless performance. Scores were 50-45 across the board for Melendez, as the Cesar Gracie protégé won his fourth fight in a row.

Melendez had an answer for Aoki at every turn, on the feet and on the ground. A black belt in Brazilian jiu-jitsu and judo, Aoki succeeded in pulling guard on numerous occasions, but Melendez stayed in his face, scored with tactical punches and moved out of danger. The scene repeated itself over and over again throughout the five-round duel, and Aoki’s situation grew more desperate with each passing minute.

Far ahead on the scorecards, Melendez finished with a flurry. He swarmed Aoki with hammerfists and punches near the end of round five in a concerted attempt to put away the dream champion. The 28-year-old Californian settled for a unanimous nod from the judges, as he added a signature victory to an already impressive resume.

“Against this guy here, he’s very intelligent and it’s like a chess match, so I couldn’t make any mistakes,” Melendez said. “I had to wait to the pull the trigger until the [last] 30 seconds of every round. I wish I could have pulled the trigger a little more, but this guy’s real dangerous.” 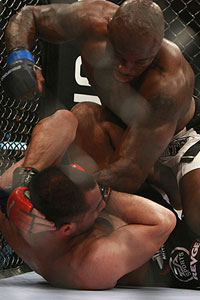 Muhammed “King Mo” Lawal walked into the cage donning a fictional crown. He left it with the real thing.

Lawal scored with multiple takedowns in the first, second and fifth rounds, as he outpointed Gegard Mousasi and captured the Strikeforce light heavyweight championship by unanimous decision. All three judges scored it 49-45 for Lawal, as the charismatic Murfreesboro, Tenn., native snapped Mousasi’s 15-fight winning streak.

Undefeated in seven professional appearances, Lawal kept Mousasi’s back pinned to the canvas throughout the fight, as he effectively neutralized the Armenian’s notoriously potent offensive repertoire. The 29-year-old Lawal punctuated the win with a strong fifth round, as he took down the defending champion three times.

Mousasi virtually sealed his own fate when he was deducted a point for delivering an illegal upkick midway through the final round. By then, Lawal, his left eye nearly swelled shut, had the match in hand. The defeat was Mousasi’s first since August 2006.

“The only thing that’s going through my mind is, ‘You’re on CBS. You all need to go ahead and get me on CSI,’” Lawal said. “I got careless, cause when I got to his legs, he was hitting me with some short shots. They weren’t hurting me or nothing, but you can see the damage on my face.”