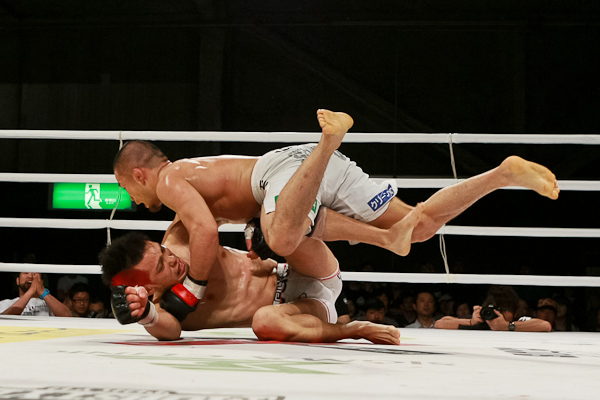 Winning the first round on the strength of takedowns, Shimizu twice put Sunabe on his back to play a conservative top game. The champ laid low in Sunabe’s guard, mashing with short punches to earn a solid 10-9. The second frame was less clear, however, as Sunabe’s takedown defense improved somewhat. Shimizu relentlessly shot in, but outside of being put on his posterior twice, Sunabe stuffed most takedown attempts to drop hammer fists and punches to the champ’s head and ribs.

The final stanza went clearly to Sunabe, as the Reversal Gym fighter stuffed takedown after takedown, marking up Shimizu with further punches. One-track minded, Shimizu did not see fit to change his game plan, and thus offered virtually no offense in the third round.

Be that as it may, judges Yoshinori Umeki and Kenji Kosuge were unstirred by Sunabe’s later takedown defense and greater offensive output, favoring Shimizu with 30-29 cards. Judge Yoshifumi Oyabu was less decisive, ruling the bout a draw at 30-30.

“I was immobilized,” admitted Sunabe to Sherdog.com after the bout. “I’ve always said I was a Pancrase fighter, so I can’t say I’m dissatisfied with the decision. I agree with it. Still, I think he took more damage than I did. I’m pretty much unscathed.”

Despite being now 1-2-1 in their encounters, Sunabe claims that he wouldn’t mind yet another rematch with the flyweight King of Pancrase.

“I’ll always be a Pancrase fighter, and so long as Shimizu is the champion, he’s always going to be in my sights,” he said. 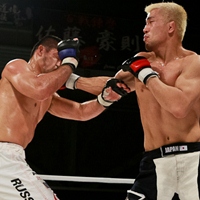 T.Irei
Sato held off Orui.
In the evening’s other championship bout, welterweight King of Pancrase Takenori Sato eked out his own title defense against the durable Sojiro Orui.

Sato took the first period thanks to a yellow card issued for two low blows on Orui’s part, after which the Laughter 7 fighter flipped his wrestling switch, shooting relentlessly on Orui. The second frame clearly went to the challenger, as Orui reversed Sato’s takedowns to put the champ on his back and blitz with heavy fire from above, closing out the frame with a soccer kick to Sato’s face.

The third and final stanza saw yet another momentum swing, ending in favor of the defending champ. Sato’s wrestling prevailed as he put a tired Orui on his back and caught him in a tight armbar attempt midway through the frame. Judges Masato Fukuda and Kosuge saw the bout 29-28 for the champ, while judge Umeki gave a more generous 30-28 scorecard for Sato. As such, both men were awarded Pancrase’s “best bout” bonus for their tumultuous, back-and-forth war.

“I’m not precise enough to finish submissions yet,” said a somewhat dejected Sato, post-fight. “Although I won the ‘fight of the night’ bonus, I really wanted to finish like my teacher, Kazushi Sakuraba, does. I don’t feel I can satisfy the audience if I don’t finish like he can.”

After a scary first round in which Masanori Kanehara earned a yellow card for two kicks to the groin, the former Sengoku Raiden Championship featherweight titlist pulled himself together to properly dispose of 2010 Pancrase Neo-Blood tournament winner Motoshi Miyaji. 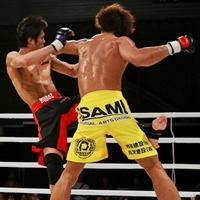 T.Irei
Kanehara clobbered Miyaji.
Abandoning low kicks altogether after the fouls, Kanehara pushed his way through Miyaji’s own leg-kick barrage to drop him with a big left hook. Kanehara spent the remainder of the first period on top of Miyaji, waling with big punches until the bell. Kanehara put Miyaji away in the second frame, landing a brain-melting left hook and a barrage of finishing punches before referee Fukuda jumped in for the save a mere 9 seconds in.

Nagamura’s jab troubled Kawamura throughout the bout and induced a sizeable hematoma over his right eye. However, had it not been for Kawamura’s active head movement, the long-time Pancrasist would have eaten worse from his big-punching opponent. In typical fashion, an all-guts-and-glory Kawamura threw caution to the wind to pursue with combinations and the occasional Superman punch. Kawamura’s carelessness in the grappling department may have cost him, as he gave Nagamura full mount off of a botched takedown in the bout’s final minute. As such, judge Kosuge ruled 20-19 for Nagamura, while judges Umeki and Oyabu saw it an even 20-20 for the majority draw.

Shigeyuki Uchiyama not only won his rematch with Masaya Takita, but he also got to keep his ear this time. The bantamweights met again exactly one year after their first meeting, during which Uchiyama’s right ear was severed by a ring rope during a takedown attempt. Thankfully, their second encounter played out differently, as Uchiyama stifled “J-Taro” on the canvas in the first frame, dropping punches to the face from the judo press, and stopping Takita’s sharp striking in the second by tying up in clinches and takedowns. While judge Umeki couldn’t be moved to pick a winner with his 20-20 card, judges Kosuge and Fukuda ruled the bout 20-19 for Uchiyama.

Defense was of no concern in Shingo Suzuki and Kosei Kubota’s welterweight war, as both men threw and ate big combinations for the full ten minutes. Between shellacking Kubota with punches and receiving equally hard blows in response, Suzuki shot for self-preserving takedowns when hit. The southpaw Kubota returned fire in kind, opening a cut over Suzuki’s right eye while mixing in guillotine attempts on the ground. The judges were split in their scores, as judge Kosuge sided 20-19 with Kubota, while Fukuda sided 20-19 for Suzuki. Judge Oyabu offered no tiebreaker, ruling it 20-20.

Isao Hirose and Seiji Otsuka had a fun, up-and-down fight, trading blows tit-for-tat and exchanging dominant positions in manic scrambles. Two rounds weren’t enough for a clear winner, though, as only judge Kosuge ruled the fight 20-19 for Otsuka; judges Fukuda and Oyabu submitted 20-20 and 19-19 draws, respectively.

Similarly, Yusuke Kawanago and Kensaku Nakamura went toe-to-toe for 10 minutes, boxing their way to a unanimous 20-20 draw on the scorecards of judges Umeki, Fukuda, and Kosuge.

Nobuhiro Yoshitake blitzed Ryo Saito with big punches on the feet and the ground before referee Kosuge put Saito out of his misery at 1:14 of the second frame, just before Saito’s corner threw in the towel.

Junichi Ota took another disqualification win over Naoto Miyazaki and a stretcher ride out of the ring thanks to a particularly brutal knee to the groin which ended their lightweight fight at 1:58 of the first. Miyazaki was similarly DQ’d in a fight with Ota due to a low blow three years prior in Cage Force.

Last but not least, in the main card opener, featherweight Masayoshi “Randleman” Ichikawa so bloodied up Shinya Irei’s face with winging punches that referee Kosuge -- rather than calling in the doctor to clean Irei up a third time -- stopped the bout at 2:39 of the second.