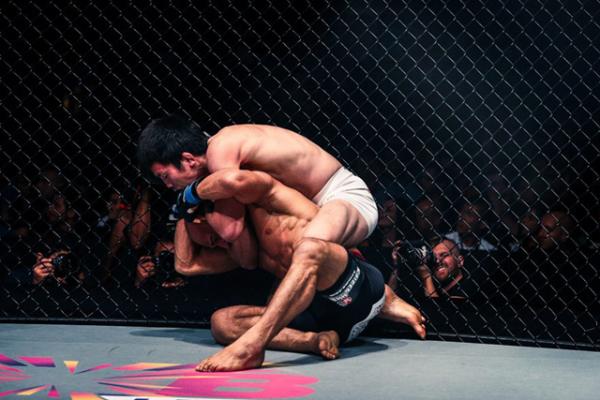 Shinya Aoki was on another level than Kamal Shalorus at One FC 19. | Photo Courtesy: One FC

Aoki submitted the Iranian-born wrestler with a first-round neck crank, as he retained the One Fighting Championship lightweight crown in the One FC 19 “Reign of Champions” headliner on Friday at the Dubai World Trade Centre in Dubai, United Arab Emirates. Shalorus (9-4-2, 2-1 One FC) conceded defeat 2:15 into round one.

His initial advances denied, Aoki (26-6, 4-0 One FC) ultimately maneuvered into mount. Shalorus surrendered his back in a desperate attempt to break free, only to leave himself vulnerable to the fight-ending crank. Aoki gladly obliged. The 31-year-old Japanese star has won 13 of his last 14 bouts, 10 of them by submission. 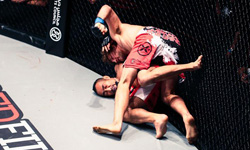 (+ Enlarge) | Photo Courtesy: One FC
Askren had his way with Suzuki.
In the co-main event, Ben Askren routed Nobutatsu Suzuki in a first-round technical knockout to claim the One FC welterweight title. A four-time NCAA All-American wrestler and two-time national champion at the University of Missouri, Askren (14-0, 2-0 One FC) drew it to a close 1:24 into round one.

Suzuki (11-2-2, 2-1 One FC) never stood a chance. Askren secured a quick takedown, moved to a dominant position and let loose with a barrage of knees and punches that rendered the Japanese striker incapable of defending himself. For all the criticism he has received, Askren has now finished each of his last four opponents. 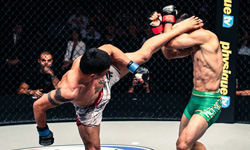 (+ Enlarge) | Photo Courtesy: One FC
Narantungalag grounded the outgunned Oishi.
Meanwhile, Sengoku alum Jadamba Narantungalag won for the 10th time in 11 appearances, as he took a unanimous verdict over Koji Oishi and captured the One FC featherweight championship.

Narantungalag (10-3, 2-0 One FC) grounded the outgunned champion in the first, fourth and fifth rounds, while also exercising his dominance in the standup. Oishi lacked the necessary firepower to give the Mongolian brute pause -- a reality that was driven home throughout their five-round affair.

Narantungalag dropped the Pancrase mainstay in the second round, applied his ground-and-pound and left visible damage to Oishi’s eye. The challenger cemented the victory with a strong round five, where he moved to Oishi’s back and again delivered punishing ground-and-pound. 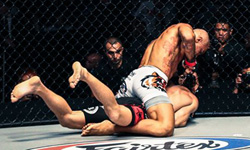 (+ Enlarge) | Photo Courtesy: One FC
Huerta destroyed Holley on the floor.
Elsewhere, Ultimate Fighting Championship veteran and onetime Sports Illustrated cover subject Roger Huerta put away the previously unbeaten Christian Holley with a volley of knees and punches in the first round of their lightweight showcase. Holley (10-1, 0-1 One FC) succumbed to the blows 3:13 into round one, giving “El Matador” his first win in more than four years.

Huerta (22-7-1, 1-1 One FC) stuffed a takedown, settled in side control and unleashed a series of hellacious knee strikes that forced the Englishmen to retreat to a defensive shell. 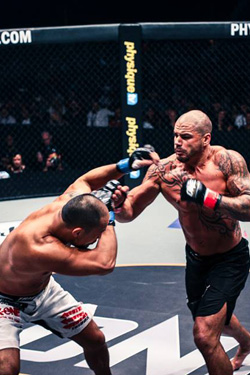 Finally, in preliminary action, “The Ultimate Fighter” Season 10 graduate James McSweeney (14-11, 2-0 One FC) knocked out Cristiano Kaminishi (8-2, 0-1 One FC) with a soccer kick 1:17 into the first round of their light heavyweight encounter; Evolve MMA featherweight Herbert Burns (4-0, 3-0 One FC) kept his perfect professional record intact with a unanimous decision against Hiroshige Tanaka (10-2, 0-1 One FC); United Arab Emirates native Mohammed Walid (4-0, 1-0 One FC) submitted Vaughn Donayre (7-2, 0-1 One FC) with an armbar 65 seconds into round one of their welterweight battle; Dejdamrong Sor Amnuaysirichoke (2-0, 2-0 One FC) submitted Ali Yaakub (0-1, 0-1 One FC) with a rear-naked choke 2:34 into the first round of their scrap at 125 pounds; and Ann Osman (1-1, 1-1 One FC) walked away with a split decision over Ana Julaton (1-1, 1-1 One FC) in a women’s flyweight clash.