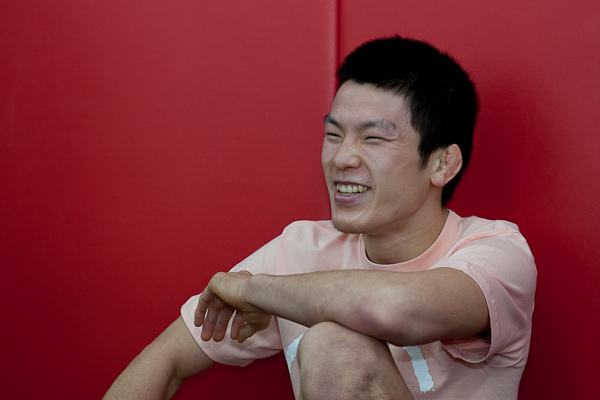 One FC 6’s main event between former Dream and Shooto champion Shinya Aoki and little-known lightweight Arnaud Lepont went exactly as most onlookers imagined it would. However, the 85-second submission for Aoki in the headliner was one of the few routine, expected components of the promotion’s third offering inside the Singapore Indoor Stadium in Kallang.

Aoki, 29, last saw action in April inside the Bellator cage where former victim Eddie Alvarez turned the tables, stopping him in just over two minutes. Arnaud, a Frenchman training out of Kuala Lumpur’s Muayfit, was on his back in seconds. He was mounted in less than a minute. The submission wizard then moved to an armbar, only to bait Lepont into a triangle. Lepont was unconscious within seconds, prompting referee Yuji Shimada to intervene.

Aoki, now 30-6 (1 NC), cited the importance of Singapore’s Evolve MMA gym to him post-fight and declared his intent to bring a title home to the gym. If that is to happen, he’ll need to go through fellow veteran Japanese Shootor Kotetsu Boku, who earned One FC’s inaugural lightweight crown with a thrilling come-from-behind knockout of another Evolve MMA fighter, Zorobabel Moreira, in one of 2012’s most exciting contests.

The 35-year-old Boku sported a thick, shrouding beard literally and figuratively in the fight. Typically a boxing technician, the Krazy Bee fighter threw with reckless abandon and relied on grit in the contest, absorbing copious jabs and kicks from the 6-foot-3 Brazilian. Partway through the first round, a whipping overhand right from Boku collapsed “Zoro,” putting the Japanese fighter just punches away from a stoppage.

Incredibly, Moreira not only weathered the storm, but upon regaining his feet, took over the fight with his kicking offense. He welted the lead left leg of Boku, spinning him around with kicks. On the ground, he threatened by submission before standing up and delivering his now-trademark soccer kicks, forcing Boku fetal.

By the third round, Moreira looked like he was on his way to a title belt and even richer prospect status. Boku, however, gave no quarter and within seconds of the third-round bell landed a counter right on the charging Brazilian, dropping him against the fence. Boku followed with two-handed punching until Moreira fell to his backside, referee Yuji Shimada toppling over him for the sudden stop, just 31 seconds into the round.

The first One FC title belt, however, went to South Korean Soo Chul Kim, who pulled off a comeback win of his own, earning revenge by knocking out favored Evolve MMA standout Leandro Issa just 15 seconds into the second round of their rematch.

The 20-year-old Seoul native was stuck on bottom and dominated for most of round one. However, the Team Force fighter heard the first-round bell, and then ensured their second clash was different from their first meeting in September of last year. As soon as the second round got underway, a counter left hook from Kim collapsed Issa, who ate follow-up shots until referee Kenichi Serizawa dove in for the save.

Kim, now 7-4 as a pro, has won three straight bouts, all of which could arguably be considered upsets, besting Issa, Filipino prospect Kevin Belingon and Japan’s Shoko Sato. Issa, who had his seven-bout winning streak snapped, falls to 10-3.

The first three quarterfinals of One FC’s bantamweight grand prix kicked off in Kallang with a collection of wildly different ways to victory.

Faded former UFC lightweight champion Jens Pulver picked up a third-round technical decision over China’s Ya Fei Zhao, but not before suffering a gruesome kick to the groin.

In the third round, just hours after Eric Prindle farcically axe kicked Thiago Santosin the groin in their Bellator 75 rematch in Hammond, Ind., a countering left inside kick from Zhao collided straight with the cup of the punching Pulver, whose reaction was a mixture of pain and sheer shock. Pulver was driven to tears, biting on a towel, in hopes of somehow regaining the ability to fight.

It simply wasn’t feasible: “Lil’ Evil” was stretchered from the cage, but owing to his prior two rounds of striking and wrestling success, was awarded the unanimous technical decision, advancing in the One FC bantamweight bracket.

“The Silencer,” who fell prey to a Masakazu Imanari leglock in March before dropping a decision to South Korean Soo Chul Kim in August, worked away on top before landing a flurry of short, accurate punches that sent Saadulaev stiff just long enough for referee Yuji Shimada to dive in at 3:18 of the bout.

One FC has yet to announce the fourth quarterfinal bout for its bantamweight tournament.

Free-swinging Dutchman Melvin Manhoef, coming off a dubious split decision win over Jae Young Kim at September’s Road FC 9 in South Korea, did what he does best against Pancrase fixture Ryo Kawamura, knocking the middleweight King of Pancrase stiff at 4:40 of the first frame. After four minutes of back-and-forth punching on the feet, the 36-year-old Manhoef capitalized when Kawamura bailed on a lazy double-leg, walking right into a crushing right hook from “No Mercy.”

In the evening opener, Singapore-based American transplant Mitch Chilson bested veteran Indonesian featherweight Ngabdi Mulyadi, pounding him out at 65 seconds into the second round.