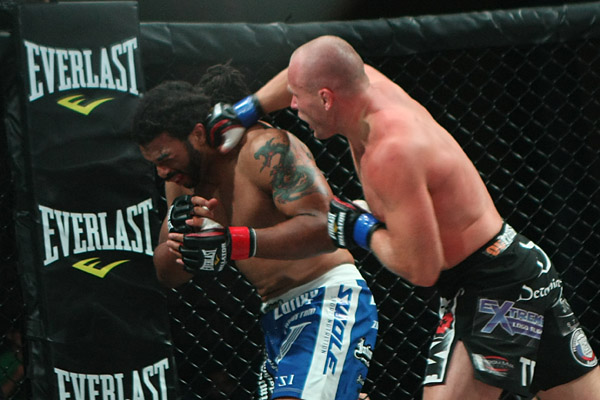 
Alexander Shlemenko took one step closer to earning his desired rematch with Bellator 185-pound champion Hector Lombard Saturday night at the Boardwalk Hall Ballroom in Atlantic City, N.J., as the Russian middleweight absorbed early punishment from Brian Rogers before finding his range and delivering a second-round knockout in the middleweight tournament semifinals at Bellator 54.

Though Rogers was the aggressor early, it was Shlemenko who was most accurate with his strikes, as he landed a pair of straight lefts before missing with a spinning-back fist. The Russian then connected with a crisp spinning-back kick, but Rogers continued to press, landing sharp punches and knees before dropping Shlemenko for a split second with a looping-right hook.

After initiating the clinch, “Predator” hit a beautiful lateral drop, but Shlemenko stood up almost immediately afterward. As the round expired, both men scored with clean shots to close the competitive frame.

“One of the shots was really good, but I saw all of them and was covering really well,” said Shlemenko, who will meet Vitor Vianna in the Bellator Season 5 middleweight tournament finals on Nov. 19 at Bellator 58.

Rogers landed a sharp right to start the second stanza before ducking another spinning-back fist and executing a quick double-leg takedown. Back on the feet, Shlemenko finally found a home for his back fist and followed with a straight left that staggered the American. “Storm” wasted no time in going on the offensive, rifling off combinations that culminated with a brutal display of muay Thai.

His opponent reeling, the 27-year-old Russian locked up a Thai plum and went to work, ripping knees to Rogers’ body and head before referee Keith Peterson stopped the contest at 2:30 of the second frame. After engaging briefly on the feet with his foe, Vianna took control of the contest with one well-placed overhand right that clipped the American on the temple and dropped him to the floor. The Wand Fight Team export smelled blood and then handed out punishment with hammer fists to the face. The American was trapped against the fence and he could not escape the position, which left referee Keith Peterson with no choice but to halt the contest.

“I can't [explain] how happy I am, you know? This is how I train. Thanks to my family ... and all my coaches very much,” said an emotional Vianna following the victory. “I'm training to be better every day. In Bellator, you don't have easy fights -- always harder, harder, harder. I promise I'll be ready to fight [either opponent] in the finals.” K. Mills
Makovsky tapped out Roberts.
Bellator bantamweight champion Zach Makovsky’s title wasn’t on the line Saturday night, but “Fun Size” was in championship form nonetheless, as he turned away a game Ryan Roberts with a first-round north-south choke in their 135-pound affair.

Makovsky went to his bread and butter from the get-go, catching a low kick and then taking Roberts to the canvas, where Roberts landed short shots from the bottom before locking up an unorthodox reverse head scissors. Makovsky would eventually escape the position and return to his feet, however, where he landed sharp inside-low kicks before finding a home for his left hand.

The champion once again put Roberts on his back late in the frame, passing to side control and eventually the north-south position. From there it was academic, as “Fun Size” found his squeeze and finished his man with a tight north-south choke with just 12 seconds to go in the opening round.

“I’ve been working on that choke lately,” said Makovsky following his first-round submission win. “It’s an awesome choke. I think it's kind of sneaky. It’s been working in training, and it worked tonight.” Nazare took the initiative early in the first frame, opening up with low kicks and combinations before Kirwan shot a successful double-leg takedown. Nazare reversed the position, however, quickly transitioning with a beautiful sweep from half guard. Kirwan picked up in round two where he left off in the previous frame, once again scoring a takedown and landing short shots from the Brazilian's half guard.

Round three brought more of the same for Kirwan, as the American grounded his man and controlled the action for most of the stanza, cruising to a unanimous nod from the judges: Sue Sanidad saw the bout 29-28, while Michael DePasquale and Tony Tamburrino offered official tallies of 30-27.