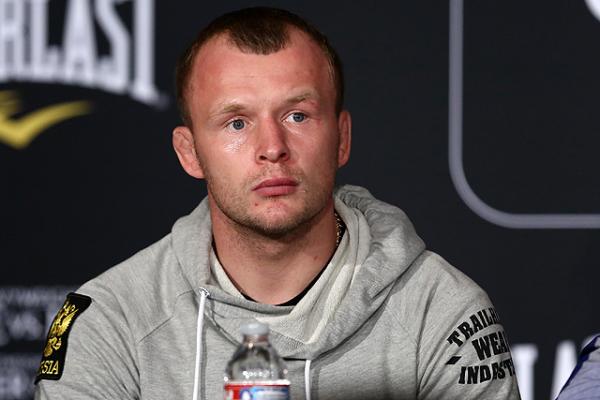 
Alexander Shlemenko is denying the use of any banned substances after a failed drug test resulted in his victory against Melvin Manhoef at Bellator 133 being overturned to a no-contest.

The former Bellator middleweight champion tested positive for an elevated testosterone-to-epitestosterone ratio in a pre-fight screening ahead of his Feb. 13 win over Manhoef at Save Mart Center in Fresno, Calif. California State Athletic Commission Executive Director Andy Foster confirmed the result and also revealed to MMAJunkie.com that Shlemenko tested positive for another banned substance, although Foster was unable to reveal the nature of the violation due to state privacy laws.

Shlemenko’s lawyer, Howard Jacobs, issued a statement to Sherdog.com on Tuesday evening denying the fighter’s use of banned substances and citing “unusual and questionable findings” by the CSAC:

Alexander Shlemenko denies the use of any banned substances, and looks forward to clearing his name at the next meeting of the California State Athletic Commission with his lawyer Howard Jacobs. His representatives have requested and are still awaiting the complete laboratory documentation package from the CSAC, given the extremely unusual and questionable findings that have been initially reported. The document request that has been made is consistent with the types of documents that the testing laboratory used in this case routinely provides -- without the necessity for such a request -- in cases involving the United States Anti-Doping Agency. It is impossible for Mr. Shlemenko to properly respond to these charges until he is provided with this basic documentation, and it is hoped that CSAC will not withhold such basic documentation.

According to his website, Jacobs has represented professional, Olympic and amateur athletes “in disputes involving doping, endorsements, unauthorized use of name and likeness, salary issues, team selection issues and other matters.” Jacobs, who has notably provided counsel for the likes of track star Marion Jones, cyclist Floyd Landis and luger Zach Lund, was referred to as “drug testing’s version of Johnnie Cochran” in a 2006 USA Today piece for his ability to attract high-profile athletes as clients.

The next CSAC meeting is currently scheduled for April 28. An agenda has not been released. Foster informed Sherdog.com that Shlemenko can still appeal the commission's ruling.

Jeff Sherwood contributed to this story