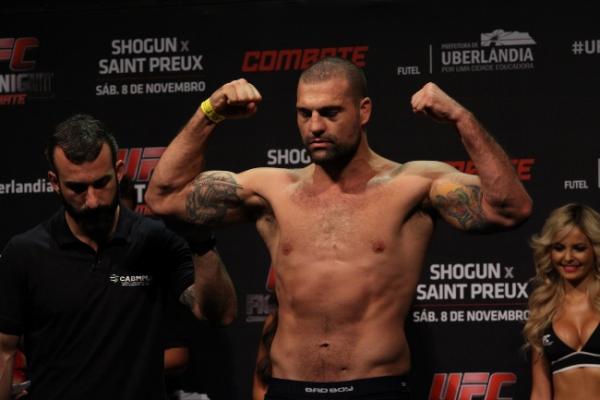 
Mauricio Rua was a man of few words following his loss to Ovince St. Preux on Saturday night.

“Shogun” succumbed to a counter left hook just 34 seconds into his headlining bout against the former University of Tennessee football player at UFC Fight Night in Uberlandia, Brazil. It was the second consecutive knockout loss for the Brazilian, who was stopped in the third round by Dan Henderson this past March.

Overall, the former UFC light heavyweight champion and 2005 Pride Middleweight Grand Prix winner has lost four of his last five inside the Octagon.

“Losing is always bad,” Rua said through a translator at the post-fight press conference. “In this weight class and heavyweight, when a punch lands, you feel it. But I’m gonna get through this loss and talk to my team and think about the future. Defeats always suck.”

Rua didn’t have much opportunity to make his mark. St. Preux opened with a push kick and a kick to the chest, and the longtime Chute Boxe standout responded with a hard leg kick. Moments later, Rua rushed forward and whiffed on an overhand, allowing St. Preux to connect with a left hand behind the ear. OSP sealed the victory with a barrage of follow-up strikes on the ground, silencing the crowd at Tancredo Neves Municipal Gymnasium.

Coming into the bout, St. Preux had an idea that a countering opportunity would be available.

“Shogun comes in with looping punches and I’m pretty good at counter punches. I did a real good step off. ... I used that and it ended up landing real good,” St. Preux told Fox Sports.

“I just threw the high kick just to let him know I could throw one and let him know it was there. I knew he was going to try to pressure me. He threw the inside leg kick. I was gonna check that, but he caught me real good with the inside leg kick,” St. Preux continued. “And I knew when he had me back up against the fence that he was gonna lunge in. When he lunged in for that hook, that’s when I countered, and I caught him pretty clean.”

“The punch landed clean and that’s when a knockout happens,” he said. “He was happy to get it. I made a mistake.”

Next on the 32-year-old Rua’s agenda is a coaching stint opposite Anderson Silva on the fourth installment of “The Ultimate Fighter: Brazil.” His next in-cage appearance remains a mystery, however, as Rua and Silva will not fight each other at the conclusion of the reality show.