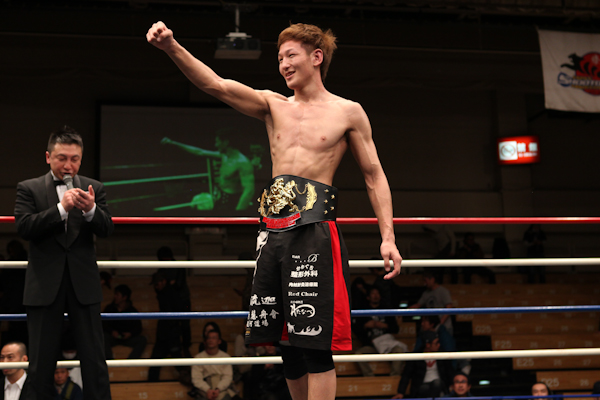 The title, once held by legendary Shootors like BJ Kojima and Mamoru Yamaguchi, has been vacant since Yasuhiro Urushitani relinquished it after signing with the UFC in early 2012. Had it not been for a few stray low-kicks from Saruta, Shooto’s 123-pound division might have had a new king.

The bout opened with “Flying Monkey” Saruta taking control early. After a quick takedown from the back-clinch, the grappling specialist worked to lock up an arm-in guillotine from the top, getting close to a finish before Miki popped his head free and returned to his feet. From there, Miki started to find his rhythm, countering Saruta’s wide-angled hooks with short shots of his own.

Miki, in his second Shooto title match, carried this momentum into round two, but was stifled after a few misplaced kicks from Saruta landed in Miki’s groin. Another shot struck below the belt in the third frame, and referee Toshiharu Suzuki deducted a point from Saruta. The Redips grappler capitalized on Miki’s hesitance, however, and pulled out a repeat of the opening round, throwing in an attempted “Kadowaki special” for good measure. More solid grappling earned Saruta the fourth round, but Miki finally found his rhythm in the fifth and final round, picking apart the grappler with quicker punches and varied combinations.

After 25 minutes, the judges offered up wildly varied scores, with judge Tomohiro Tanaka seeing it 50-46 in favor of Miki, Tadashi Yokoyama scoring it 48-49 for Saruta, and referee Suzuki turning in an even 47-47 scorecard. Had it not been for the point deduction, Saruta would have gone home with the title.

Yuta Sasaki left no doubts in defending his Shooto Pacific Rim 132-pound title, knocking out challenger Kenji Yamamoto with a single left-straight in the opening seconds of their fight. Yamamoto went straight to the floor and “Uruka” followed through with a couple more shots before referee Suzuki called a stop at the 11-second mark of round one. The victory marks the first time Sasaki (Pictured, file photo) has finished a fight with strikes, as the young prospect improved his record to 13-1-2.

Post-fight, Sasaki vacated his title, vaguely stating his desires to move on to the “world level,” and possibly a shot at Kyoji Horiguchi’s world championship.

After almost two years away, former Shooto Pacific Rim titleholder Taiki Tsuchiya made a successful return to the ring, outpointing Yoshifumi Nakamura at the end of three rounds. The Rumina Sato protégé showed some signs of ring rust early on, looking a bit stiff in the stand-up, but eventually found his rhythm and slowly dismantled Nakamura over time. Tsuchiya sealed the deal with a violent takedown in the final seconds of the fight, seemingly dislocating his shoulder in the process. His performance earned him scores of 30-28, 30-27 and 29-28, giving him the unanimous decision win.

At 123 pounds, Pancrase champ Kiyotaka Shimizu and Kentaro Watanabe put on a fireworks show, with both fighters battling to the brink of unconsciousness on multiple occasions. Osaka native Watanabe drew first blood, clipping Shimizu with a big counter-hook early on and pouncing on the King of Pancrase, but failing to finish. Watanabe’s offense proved a bit overzealous, as he soon found himself on the receiving end of a big hook which sent him crashing to the floor. Watanabe managed to get back to his feet and the give-and-take pattern resumed for the remainder of the three rounds. After the dust settled, Watanabe came out on top with scores of 30-28 and 29-28 against Shimizu’s single 30-29.

After a slow start, veteran grappler Keita Nakamura finished his fight in typical “K-Taro” fashion, dropping Kota Shimoishi with a right hook in the opening seconds of round two, then moving straight to the back and sinking in a fight-ending rear-naked choke. The tap from Shimoishi came at the 37-second mark of the second round.

In the opening round of Shooto’s 2013 Infinity tournament at 154 pounds, Nobumitsu Osawa weathered a tight RNC attempt from Takahiro Suzuki in round one before staging a crucifix-mount clinic for the entirety of round two. Osawa, known as “Tyson” for his muscular build and in-ring antics, took a unanimous decision victory with scores of 20-18, 20-17 and 20-17.

In other Infinity tournament bouts, Koji Nishioka used takedowns and top pressure to earn a unanimous decision win over Yoshinori Suzuki, while Yu Fujimaki recorded a TKO finish against Yoshinori Takahashi at the 4:44 mark of the first round.