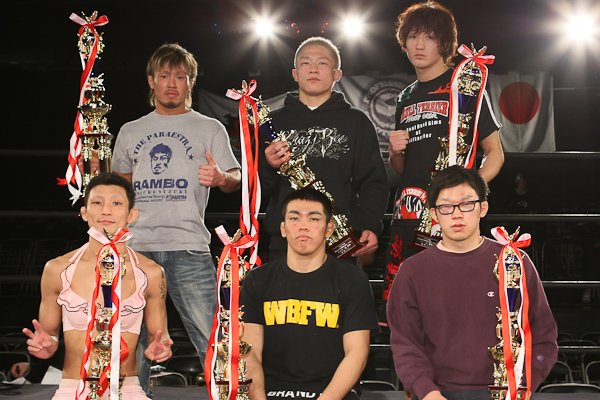 They are all former Shooto rookie champions, and on Saturday at Shinjuku Face in Tokyo, pro Shooto crowned one of the most exciting rookie classes since the inception of the rookie tournament series in 2002.

The cream of the 2010 crop was 143-pound rookie king Yuta "Uruka" Sasaki, who outclassed Yo Saito on the floor en route to a unanimous decision. Sasaki displayed a level of grappling prowess usually only seen in seasoned specialists like one of his training partners, Dream lightweight champion Shinya Aoki. Speaking to his grappling chops, the 21-year-old Sasaki tapped well-regarded grappler Katsuya Toida by rear-naked choke in a grappling match in July 2009.

Sasaki’s transitions were brilliant. In the first round, when Saito attempted to slam out of a triangle, Sasaki transitioned instantly to an armbar and, from there, nearly choked Saito unconscious with a figure-four-grip guillotine. 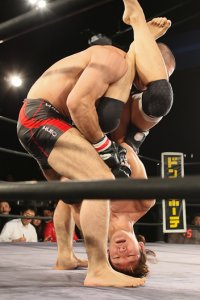 T. Irei
Yuta Sasaki impressed with his
dominant grappling display.
In round two, “Uruka” took back control, threatening with chokes and punches. Judges Tadashi Yokoyama and Toshiharu Suzuki scored the bout 20-18, while judge Kosuke Watanabe had it 20-17 for Sasaki. For his prodigious grappling, Sasaki was awarded the 2010 rookie "Best Technique" prize.

Meanwhile, 20-year-old Krazy Bee rep Kyoji Horiguchi stopped Seiji Akao to become the 2010 132-pound rookie champ. The Norifumi "Kid" Yamamoto pupil opened the second round with a blistering barrage of punches that dropped Akao in his corner. Horiguchi allowed Akao to stand, following up with another barrage against the ropes, as Akao helplessly turned away from the punches. Referee Toshiharu Suzuki jumped in for the stop 43 seconds into the round, just as Akao's corner threw in the towel. Horiguchi's tournament performance earned him the 2010 rookie tournament MVP award from the Japan Shooto Association.

Kota Shimoishi took the 154-pound rookie title with a miraculous comeback submission of Akira Okada. Okada dropped his fellow 23-year-old twice in round two but foiled himself by throwing an illegal knee while Shimoishi was grounded, prompting referee Toshiharu Suzuki to deduct a point from him and leading to a majority draw after two rounds. In the extension round, Shimoishi suddenly captured Okada's back in a scramble and sunk the choke, forcing the tap for a dramatic ending at 1:24 of the third.

The win was also a measure of revenge, as Shimoishi is a student of former Shooto world champion Takashi Nakakura, while Okada is a pupil of Takanori Gomi, who knocked out Nakakura in May 2009, detaching his retina and forcing him out of action since.

Faux M-16 in hand, Kosuke "Rambo" Suzuki gunned down two-time Brazilian jiu-jitsu World Championships silver medalist Yusuke Honma to win the 123-pound rookie tournament. The first round saw both men trade stiff shots on the feet, until Suzuki crushed Honma with a pair of hooks that crumpled the star grappler against the ropes. The official end came at 4:53, after which an inert Honma was taken from the ring on a stretcher. Suzuki was awarded the 2010 rookie tournament "Fighting Spirit" prize.

Masayoshi Kato took a split decision (20-18, 20-19, 19-20) over Tadaaki Yamamoto to become 115-pound rookie champ in a fight that saw spit and sweat fly in the punching exchanges. "Macho the Butterfly" also showed the eccentric flair of his trainer, Dokonjonosuke Mishima, entering the ring in a frilly pink two-piece bikini. Lone judge Tadashi Yokoyama scored the bout for Yamamoto.

Kadowaki Controls Yachi, but "Sarumaru" is the Showstopper

No matter what Yachi threw -- flying punches or wide head kicks -- Kadowaki was able to block or take Yachi to the canvas. Kadowaki dropped short punches, constantly controlling the hyperactive Yachi. Judges Kosuke Watanabe and Tadashi Yokoyama had it 20-18 for the former champ, while Toshiharu Suzuki saw it 20-19. 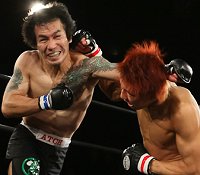 T. Irei
Junji Ito (right} swung until he
knocked out Atsushi Takeuchi.
However, the evening's real marquee bout was an exhilarating slugfest in which pint-sized punchers Junji "Sarumaru" Ito and "Atch Anarchy" Atsushi Takeuchi traded big blows up until the inevitable knockout finish.

It was "Sarumaru" who fell first, as the southpaw Takeuchi landed a fully loaded left cross, sending Ito careening into the corner. With a wide grin on his face, Ito began recklessly swinging with desperate abandon in an attempt to clip the oncoming Takeuchi.

"When I got hit early, I really was in trouble," Ito said after the bout, "but in a striking battle, I simply can't lose. So, I just came back and knocked him out."

And knock out Takeuchi he did. Moments later, a recovered Ito chased down the tattooed Takeuchi with more winging punches, finally raking a right hook right across the chin. An instantly unconscious Takeuchi fell face-first to the canvas, prompting referee Toshiharu Suzuki to dive in to save him from further punishment at 3:58 of the first round.

"Everyone’s seen my punching power," the boisterous Ito bragged in the post-fight glow, lobbying for a shot at the Shooto 115-pound world champion Rambaa Somdet. "People now believe that I can knock out Rambaa. It'd be a fun fight to see, don't you think?"

In bantamweight action, Tetsu Suzuki used his strong grappling and survived two knockdowns in the third round from Masato Sannai to take a majority decision win (29-28, 29-28, 28-28).