For the better part of five rounds, Chael Sonnen did exactly what he said he was going to do to Anderson Silva, but in a split second, the middleweight king turned the tables.

Stuck underneath the gritty Sonnen, Silva secured a textbook triangle choke and submitted the challenger 3:10 into the fifth round of their UFC 117 main event on Saturday at the Oracle Arena in Oakland, Calif. Sonnen tapped only once, but it was enough to get the attention of referee Josh Rosenthal, who moved in and halted the bout.

“I don’t have any excuses. Chael had a hell of a fight tonight,” said Silva, who improved to 12-0 inside the UFC. “I knew that I was losing the first four rounds, but, you know, not to make any excuses, about a week and a half ago, I hurt my ribs. The doctor asked me not to come in and fight, but for you guys and for the UFC, I came in here and put it all out on the line.”

Sonnen clearly won the first four rounds and started with a bang, as he rattled Silva with a straight left hand mere minutes into the match. From there, he controlled the embattled champion with stifling top control and wide-ranging strikes on the ground: punches, hammerfists, elbows and slaps to the ears.

A collegiate All-American wrestler at the University of Oregon, Sonnen successfully secured takedowns in three of the five rounds and wound up in top position in all five. He absorbed his share of damage, as Silva picked his spots with elbows from the bottom, one of which cut Sonnen badly above the left eye. As the two middleweights entered round five, the heavily favored champion found himself in an unfamiliar state of desperation, needing a stoppage to retain his title.

With his foe grinding away on top, Silva deftly slid the choke into place. Sonnen tried unsuccessfully to counter the hold but, with no means of escape, surrendered with less than half a round remaining in the fight.

“It was a tough fight,” Sonnen said. “He’s a tough guy. I came in second. There’s nothing I can say. They gave me my opportunity, and I came up short.”

Fitch cemented his place as the world’s No. 2 welterweight behind champion Georges St. Pierre, as he took down Alves eight times en route to a unanimous decision in the UFC 117 co-main event. All three judges sided with Fitch by 30-27 counts, as the 32-year-old American Kickboxing Academy standout won for the 21st time in 22 appearances and improved to a staggering 13-1 inside the UFC.

Perhaps depleted by another failed weight cut, Alves was never in the fight. Fitch delivered three takedowns in the first round, four more in the second and another in the third. In his first appearance in more than a year, Alves failed in his attempt to avenge a 2006 defeat to the Fort Wayne, Ind., native, who smothered him with his oppressive top game.

Overheard in the corner telling his trainers Alves was “weak in the clinch,” Fitch absorbed almost no damage, as he went the distance for the eighth consecutive time and secured a second crack at the UFC welterweight crown.

Former Strikeforce lightweight champion Clay Guida dragged Rafael dos Anjos into the third round, where the Brazilian jiu-jitsu black belt submitted to an apparent jaw injury. Dos Anjos, cringing in visible pain, waved the white flag 1:51 into the third round.

Guida fell behind early, as dos Anjos peppered him with punches and inside leg kicks. However, Guida did connect to dos Anjos’ jaw with punches during an exchange, which likely contributed to the eventual submission.

Guida turned the tide in round two, as he secured his first takedown, controlled the last half of the round from top position and neutralized dos Anjos with ground-and-pound. In between rounds, concern over the injury became evident in dos Anjos’ corner.

Backed by the Jackson’s Mixed Martial Arts team in Albuquerque, N.M., Guida again took down dos Anjos in the third round. He moved to half guard and applied pressure to the Brazilian’s neck and head, forcing the tapout.

“It took me a while to realize I’m my biggest distraction,” said Guida, who has won back-to-back fights. “Coach [Greg Jackson] is going to make me a champion. Champions aren’t born; they’re made. They’re trained.” 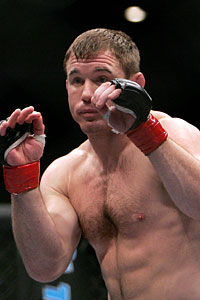 UFC hall of famer Matt Hughes might not be finished as an elite welterweight.

Hughes knocked down former middleweight King of Pancrase Ricardo Almeida with a ringing left hook and then rendered him unconscious with a modified anaconda choke. The end came 3:15 into round one, as Hughes became the first man to submit the Renzo Gracie-trained Brazilian jiu-jitsu black belt.

“It’s an old wrestling move,” said Hughes, who posted his record 17th win inside the Octagon. “I’ve been good at it. I’m happy to beat a good Brazilian with a wrestling move.”

Roy Nelson stood in front of Junior dos Santos for three rounds and lived to tell the tale, but his dogged determination and truckstop toughness were not enough to unseat the talented Brazilian.

Dos Santos scored repeatedly with uppercuts, knees to the head, punches to the body and even a third-round takedown, as he won a unanimous decision from the former International Fight League heavyweight champion. Scores were 30-26, 30-27 and 30-27 for dos Santos, who secured a title shot with his seventh consecutive victory.

“I’ll be ready,” said dos Santos, who will fight the winner of the October matchup between champion Brock Lesnar and challenger Cain Velasquez.

Nelson needed every ounce of his fortitude to survive the first five minutes. “The Ultimate Fighter” Season 10 winner went down twice to uppercuts from dos Santos and appeared close to being finished more than once. He did not go away, however, and pressed the Brazilian deeper into the fight. Dos Santos turned his attention to Nelson’s body late in the match and gradually wore down the portly heavyweight with strikes. Even so, Nelson won the admiration of dos Santos in defeat, his first inside the Octagon.