It felt as if the MMA world’s collective jaw hit the floor all at once.

Middleweight champion Anderson Silva retained his crown in spectacular fashion, as he knocked out Vitor Belfort with a front kick to the face in the UFC 126 main event on Saturday at the Mandalay Bay Events Center in Las Vegas. Two punches on the crumpled Belfort polished off “The Phenom” 3:25 into round one.

“I want to start by thanking all my trainers who have helped me with all the different disciplines,” Silva said. “Thanks to my coach for teaching me that kick. Everybody should respect Vitor. Before I even started fighting, he was a champion, so he deserves your respect.”

Silva, staking his claim as the greatest fighter of all time, has won 14 consecutive fights, a record 13 of them inside the Octagon, where he has dominated like no other man in history.

A lengthy feeling-out process between the two middleweights ended with a pair of leg kicks and a right-left combination from Belfort. It was but a small victory for the former light heavyweight king. With the two men standing face to face, Silva fired the front kick up through his defenses and dropped him where he stood. Belfort looked like he had been cut down by a sniper. A right and a left, as Silva passed his foe’s foggy guard, finished it.

“That’s just one of the strikes I was working on,” Silva said. “I was focusing on many different types of strikes and attacks.”

Belfort entered the cage on a five-fight winning streak. He left it humbled and beaten. Never before in his 14-year career had Belfort been finished so quickly.

“Anderson is a very good fighter,” Belfort said. “I was waiting and doing my thing, but I got caught. That’s why [he’s a champion]. He faked to the body and kicked to the head. He’s a great fighter. I promise I will be back, and I will bring the fire again.”

In his first appearance in more than a year, former light heavyweight champion Forrest Griffin outstruck, outwrestled and out-grappled Rich Franklin en route to a unanimous decision in the co-main event. All three judges scored it 29-28 for Griffin, a winner in five of his past seven bouts.

“[I felt] rusty,” Griffin said. “It’s great to be back, obviously. I wanted to win, and I was so nervous. My camp didn’t go right, but I feel good now.”

Griffin set the tone with a strong first round, as he took down Franklin inside the first 30 seconds and kept the one-time middleweight king on his back the entire round. The Xtreme Couture Mixed Martial Arts representative delivered another takedown in round two and wobbled Franklin with a looping left hand.

Ahead on the scorecards, Griffin took a more conservative approach in the third round, content to trade blows with Franklin from the outside. Franklin -- taken down twice in the final 90 seconds -- scored with crisp kicks to the body and occasional punches, but the sporadic strikes were not enough to sway the judges to his side.

“It’s hard to come back after a year without people going game speed, let alone [against] a southpaw who’s quicker than me,” Griffin said. “Fortunately, I was able to get him down in the first round and grind him down a little bit, so I felt like I had built up a little lead.” 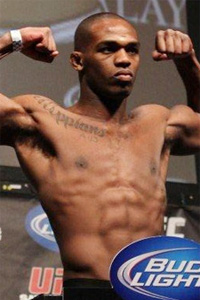 File Photo
Jon Jones earned a title shot.
Jon Jones submitted “The Ultimate Fighter” Season 8 winner Ryan Bader with a second-round guillotine choke, as he passed the most significant test of his career. The tapout came 4:20 into round two.

The victory, Jones’ third in as many appearances, earned the fast-rising superstar a shot at light heavyweight champion Mauricio “Shogun” Rua in the Rashad Evans.

Jones had no trouble with Bader, as he scored with a takedown in the first round and set up briefly for a North-South choke. The previously unbeaten Bader looked baffled throughout the one-sided encounter, short-circuited by his foe’s otherworldly athleticism and 10.5-inch reach advantage. The decorated collegiate wrestler pulled guard in the second round but did not improve his luck from his back. Jones worked first for the brabo choke and then transitioned to the guillotine for the finish.

Rising contender Jake Ellenberger survived a serious scare against the previously unbeaten Carlos Eduardo Rocha, as he carried a split decision in their welterweight showcase. Two of three cage-side judges scored it for Ellenberger, 29-28; a third saw it 30-27 for Rocha.

Ellenberger clipped the Brazilian submission specialist with a quick left hand to start and took it to the ground. There, Rocha went to work, as he scrambled into side control from the bottom, took his opponent’s back and moved to mount. Ellenberger eventually escaped, only to be nearly submitted with a kimura later in round one.

Over the final 10 minutes, Ellenberger elected to keep the fight standing, and it worked to his benefit. The Omaha, Neb., native scored with strategic takedowns at the end of rounds two and three, escaping with his third straight victory.

Former World Extreme Cagefighting bantamweight champion Miguel Torres followed his game plan to near perfection in his promotional debut, as he cruised to a unanimous decision over Antonio Banuelos in a featured matchup at 135 pounds. All three judges scored it 30-27 for Torres.

Torres lit up Banuelos with a stiff left jab and popped the inside and outside of his lead leg with kicks throughout the three-round encounter. A longtime training partner of UFC hall of famer Chuck Liddell, Banuelos never got inside the Torres reach advantage, measured at a ridiculous 13 inches.

“I did what my coach wanted me to do,” Torres said. “Antonio is dangerous on the inside, so I wanted to fight him on the outside.”

The 30-year-old Torres, now training under Firas Zahabi in Montreal, picked up his pace in round three, as he kept his textbook jab in Banuelos’ bloodied face and scored with well-timed combinations from the outside. He has won 19 of his last 21 bouts.

“He’s real tough,” Torres said. “He took a lot of punches. I knew I broke his nose. I heard it crunch a couple of times.”