Suspended fighter Antonio Silva filed a civil action against the California State Athletic Commission on Jan. 7 in Los Angeles Superior Court, the first known case in which a mixed martial artist has legally contested a CSAC decision outside the state regulatory body.

Silva is asking for a “writ of mandate,” or a ruling from the court that will supersede the CSAC’s decision to suspend the fighter for one year for alleged steroid use and possibly allow Silva another hearing to try and prove his innocence.


Advertisement
Silva, 28, was suspended after allegedly testing positive for Boldenone metabolite following his July 26 contest against Justin Eilers at an EliteXC event in Stockton, Calif.

Silva’s attorney, Howard Jacobs, will file for a motion this week for the case to be heard at a future date. Jacobs said he has also sent a letter to the CSAC requesting the postponement of a Feb. 10 hearing where Silva’s license is to be reviewed for revocation following the fighter’s participation at an event in Japan on Jan. 4.

The CSAC contends Silva violated the state’s Business and Professions Code 18850, which states that, “any boxer or martial arts fighter who participates in a contest or match while under suspension by the commission, or any other recognized commission, shall have his or her license revoked.”

If the CSAC does not postpone the hearing, Jacobs, who will be in a Florida court on another case on Feb. 10, said he will file for a motion to stay the proceeding until the civil action can be heard and decided upon.

At a CSAC hearing on Oct. 22 in Los Angeles, Silva, his manager Alex Davis, and world-renowned doping attorney Jacobs appealed the fighter’s sentence on the grounds of a “false positive” from the over-the-counter nutritional supplement Novedex.

Novedex, which contains the testosterone booster ATD, is currently not included on the CSAC’s list of banned substances and has been documented to cause false readings for Boldenone before. Through his translator and manager Alex Davis, Silva said he’d taken the supplement for four weeks prior to the bout. 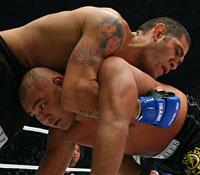 Daniel Herbertson/Sherdog.com
Silva fought Yoshihiro
Nakao on Jan. 4.
Silva did not disclose his use of Novedex on a mandatory pre-fight questionnaire submitted to the commission, though the form was presented to the Portuguese-speaking fighter in English. Davis told the CSAC that he had assisted Silva with portions of his questionnaire, and wrote down the word “multivitamins” when Silva said he’d ingested supplements.

At the hearing, Jacobs also presented clean test results for an independent specimen Silva sent to the AEGIS laboratory in Florida on Sept. 3, approximately 40 days after his state-administered test.

CSAC board members questioned the validity of Silva’s independent test in regards to its authenticity and chain of custody. Members also asked why Silva did not submit purchase receipts for the Novedex he allegedly took, before the five commissioners voted to unanimously uphold the suspension through July 27, 2009.

The Jan. 7 civil action filing contends that the CSAC’s ruling that the positive urinalysis test was conclusive proof of Silva’s steroid use is “both legally and factually inaccurate.”

“They had to prove he used something that was banned,” said Jacobs, “and once they acknowledged that the positive could have been caused by either the over-the-counter drug or by the use of Boldenone, they should have ruled in his favor.”

Jacobs said the burden of proof should have been placed on the state regulatory body to prove the fighter took the banned substance, and not with the fighter’s responsibility to prove the positive test came from the supplement.

“They shouldn’t have done what they did, which was turn around and say, ‘Well, you didn’t prove it actually came from the supplement,’” said Jacobs.

In a Dec. 11 letter to Jacobs, CSAC Chairman Tim Noonan wrote, “a mixed martial arts licensee is responsible for whatever goes into his body…Even if the Petitioner used Novedex AT and did not use Boldenone, the use of ‘any drug,’ whether denominated a ‘drug’ or ‘nutritional supplement’ that results in a positive test, is prohibited by Rule 303 and is grounds for suspension.”

In December, following the sudden departure of CSAC Executive Officer Armando Garcia -- who oversaw Silva’s case and ruling -- the state agency re-vamped its drug testing program and moved it to the same UCLA laboratory used by NFL, minor league baseball, men’s and women’s NCAA sports, and the Dept. of Defense.

Silva also accepted a bout against Yoshihiro Nakao at World Victory Road’s “Sengoku Seventh Battle” on Jan. 4 in Saitama, Japan. Silva (12-1) toppled Nakao with a technical knockout from injury at 1:42.

Silva’s manager Davis, who has steadily declared his fighter’s innocence from day one, said the fighter had no other option.

“We would have much rather not fought in Japan, but Antonio has medical expenses that he just can’t go without shouldering because of his health. He has to spend a lot of money on medicine every month,” Davis told Sherdog.com on Tuesday.

The 6-foot-4, nearly 300-pound fighter suffers from the chronic disease acromegaly, which causes enlargement of the extremities and face due to an overactive pituitary gland.

“I think we showed enough evidence that would have, at least, made them [the CSAC] investigate this further,” said Davis. “I don’t want to try and undermine the CSAC’s authority. I think they have to be rigorous with their testing. At the same time, they may need to realize here is what happened, it’s happened before, and this is the first time that somebody’s going all the way [to question it]. This doesn’t have to be set the way that it is.”

The CSAC has previously handed down hotly contested suspensions to former UFC lightweight champion Sean Sherk and Strikeforce fighter Phil Baroni, who both tested positive for steroids in 2007. Jacobs represented Sherk in his appeal, which led to a reduced suspension.

If Silva’s Feb. 10 hearing proceeds, his California license could be frozen in one-year increments until the commission voted again to reinstatement him. The commission could also vote to not revoke the license, alter Silva’s suspension, and impose a fine.

Davis said Silva has not been assigned his next bout with Sengoku, but is contracted with the Japanese promotion for the next year.