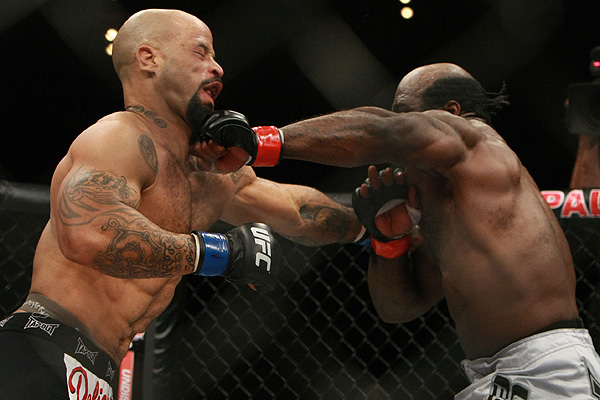 
LAS VEGAS -- Though it was far from a dazzling performance, Kimbo Slice passed his first official test in the Octagon.

Slice outpointed Houston Alexander in a unanimous decision victory at “The Ultimate Fighter 10” Season Finale on Saturday at the Palms Casino Resort. Scores from the 215-pound catchweight bout were 30-27, 29-28 and 29-28. Slice apologized for the lack of action afterward.

“Thank God, man, but I want to catch my breath first,” Slice said. “It feels good. I’m sorry about that. We did our best. You all got to give us credit.”

However, a fight many expected to end in a minute or two mutated into a stalemate for the vast majority of the opening frame, as the two men circled each other around the Octagon. Outside of a few Alexander leg kicks and one noteworthy exchange, little action transpired. The crowd littered the arena with boos in protest.

The two opened up their arsenal in the second round, as Slice landed some glancing punches before he slammed his foe to the ground. Alexander returned to his feet, only to be slammed again. Slice achieved full mount, but before he could land anything of consequence, “The Assassin” escaped back to his feet.

Alexander looked timid standing and failed to unfurl his punches until he was forced to do so in the third round. Alexander peppered Slice’s face with a series of left jabs, while the bearded brawler uncorked a flurry of punches. Alexander retreated and felled his opponent with a sizzling right leg kick but failed to capitalize. When he finally decided to try and finish the fatigued Slice, it was too late, as the YouTube sensation grabbed his leg and scored a crucial takedown late in the round.

Alexander battled back to his feet and tried his best to score a late knockout, but it never materialized. 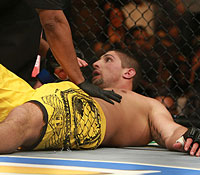 Roy Nelson punctuated his stint on “The Ultimate Fighter 10” with a first-round knockout of former NFL pro football player Brendan Schaub. The victory secured the Las Vegas resident a six-figure contract with the promotion.

Nelson, a former IFL champion, ate a few more punches than he would have liked out of the gate, but scored a takedown early and quickly moved to side control. Schaub, a student of Greg Jackson, was able to scramble back up to his feet and thwarted Nelson’s attempts at bringing the fight back to the mat.

Schaub cracked his pudgy counterpart with stiff jabs and some counter left hands, though Nelson never seemed really hurt by anything. Nelson welcomed in the scattered bursts, which allowed him to find his timing. Nelson shrouded his final blow with two blinding left jabs, then landed the fight-ending blow behind Schaub’s left ear, which sent him to the canvas. Referee Herb Dean stopped the action at 3:45 of the opening frame. 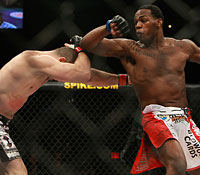 Light heavyweight contender Jon Jones overwhelmed Matt Hamill with pure talent and was well on his way to a surefire stoppage before illegal elbows from the top position resulted in his stunning disqualification.

Jones slammed Hamill to the canvas early in the opening round of their co-main event and dominated from there. Hamill, fully mounted, did everything he could do to cover up from the onslaught of punches and furious elbows. Most were blocked, but every so often, a crushing elbow found its mark. Referee Steve Mazzagatti appeared close to stopping the bout, when a number of illegal downward elbow strikes sliced open Hamill’s face. Mazzagatti halted the action, not only to allow Hamill time to recover but also to deduct a point from Jones. Hamill, however, was a mangled mess and indicated that his left shoulder had been injured sometime during the bout.

“I couldn’t defend with one arm, but I tried,” Hamill said, “and I can’t move my other arm.”

Doctors quickly tended to the wounded New Yorker, and after they examined Hamill, Mazzagatti took their advice and called off the fight. Just like that, Jones tasted defeat for the first time.

“I’ve heard that so many times, when you lose, you come back a better, stronger person,” Jones said. “Regardless of the outcome, God is so good to me and life is so great, and I’m just so grateful for being healthy and everything else. Everything happens for a reason."

Aside from the brutal beating administered by Jones while he had Hamill mounted, he dominated the bout on the feet up until the takedown. He confused Hamill with awkward striking, spinning elbows and sneaky side and head kicks.

Nevada State Athletic Commission Executive Director Keith Kizer stated after the bout that instant replay was utilized by Mazzagatti to make the official ruling. It marked the first time instant replay was administered in the state for a mixed martial arts bout. 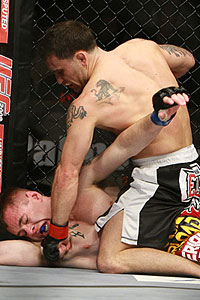 World-ranked lightweight Frankie Edgar held an advantage on the feet, and his powerful right hand paved the way to a second-round rear-naked choke submission victory over the previously unbeaten Matt Veach.

Veach opened the bout with a sizzling takedown, as he scooped up his opponent, hoisted him onto his shoulders, ran across the Octagon and slammed him down hard. Edgar was unfazed and battled back to his feet, but he ended up on his back moments later. With blood dripping from his nose, the Toms River, N.J., native decided to try and bait Veach into trading with him. The decision worked, as Veach had a difficult time getting close enough to his foe to score a desired takedown. Edgar used deft footwork, a textbook sprawl and decent punching to keep Veach honest.

Veach looked a bit winded at the close of the opening round but quickly regained steam in the second. Edgar stuffed the double-leg and pressed down on Veach’s head to thwart whatever offense he had in mind. Edgar then pushed off and separated, and once he created enough room to strike, a perfect right cross sent Veach staggering across the Octagon; he eventually fell against the cage. Edgar, smelling blood, pounced on his wounded foe and unloaded a barrage of punches.

Veach defended well, but he could not escape and ultimately surrendered his back. Edgar quickly secured a picture-perfect rear-naked choke, coaxing the tapout 2:22 into the second round.

“I kind of had a slow start,” Edgar said. “He’s a strong dude, came in, he was game. But I made my adjustments. Second round, I felt a lot better and I was able to finish him.” 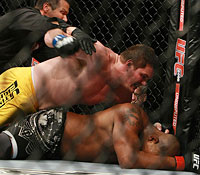 Matt Mitrione and Marcus Jones, two men who loathed one another’s company on Season 10 of “The Ultimate Fighter,” wasted little time in exchanging pleasantries inside the Octagon.

Jones, a former first-round draft pick in the NFL, quickly scored a takedown, and his size and strength looked like they might be too much for Mitrione to handle. Jones tried to uncork a few punishing strikes from within Mitrione’s guard, but his opponent weathered the storm.

Moments later, the two heavyweights were on their feet and flailing away at each other. Mitrione fell into an attempted guillotine choke, but when Jones pulled guard in an attempt to close the show, Mitrione popped out his head out. The Indianapolis fighter shot back to his feet after Jones failed to secure a triangle attempt but later succumbed to another takedown. From there, it was all downhill for Jones, as his gas tank failed him.