Smith picked himself up off the canvas time and again, absorbed every imaginable kind of spinning kick and scored a dramatic come-from-behind technical knockout against the previously undefeated Le in the Strikeforce “Evolution” main event on Saturday at the HP Pavilion. The end came 3:25 into round three.

Smith had no foothold for two and a half rounds, as Le, the hometown favorite, picked his shots and landed at will until he ran out of gas.

“That was so much fun,” Smith said. “That’s how I like to fight. I’ve got a hard head. He beat on me for a good two and a half rounds. I’m never out of a fight, you guys; that’s why I’m fun to watch. I know I may not be in line for the belt. I just want these tough fights.”

Smith scored the decisive blow when he faked a right hand and connected with a crushing left hook that buckled the former middleweight champion. Smith continued the assault, and, as Le tried to regain his wits, he landed a right hand that put the San Shou master on the floor. From there, the finish was academic, as the UFC veteran riddled Le with punches until referee “Big” John McCarthy came to the rescue.

“He caught me with a punch,” said Le, whose first appearance in 21 months ended in failure. “He was the better man tonight. I fought my heart out; he fought his heart out. You win some; you lose some. I did my best.” 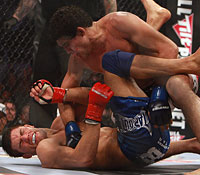 Gilbert Melendez ended his 18-month exile from the Strikeforce lightweight throne with a dominating five-round decision over Josh Thomson, the man who ousted last year, in a clear contender for “Fight of the Year.” Scores were 49-47, 49-46 and 49-46.

Melendez was a heavy favorite when the two former sparring partners hooked up for the first time in 2008, but Thomson pulled off the upset and pitched a shutout in the process.

The second encounter told quite a different story, as Melendez outstruck Thomson, a trick he was unable to turn last year. The difference this time was Melendez’s ability to beat Thomson to the punch. He consistently landed when the two exchanged and dropped Thomson in the second and fifth rounds.

There were a number of brilliant exchanges throughout the fight, but Melendez found the mark at a higher clip. Thomson started quickly and appeared to win the first round, but from there, Melendez piled up the points and held an insurmountable lead going into the final round.

Knowing he was staring a loss in the face, Thomson came out aggressively to begin the championship round. He chased down Melendez and battered him with punches. The challenger did not back down, however, and fired back with winging shots of his own. The two took a quick breather before re-engaging, but Melendez seized the upper hand with a straight right that put Thomson down for the second time.

The champion did not relent, and, as the two locked up in a clinch along the cage, Thomson threw Melendez to the mat with a body-lock and landed in mount. He tried to transition to his opponent’s back, but Melendez scrambled to his feet, as the last gasp went out of Thomson’s comeback attempt.

“The reason why Gilbert beat me tonight [was] he was the better fighter,” said Thomson, who, because of injury, had not competed in 15 months. “I don’t want people making excuses. He had a [expletive] wonderful fight.”

Souza, a highly decorated grappler, took it to Lindland in their stand-up exchanges early in the round and forced the wrestler to take the match to the ground, where Jacare was at his most dangerous. Once the fight hit the mat, a series of scrambles and escapes followed. Lindland was caught in a shoulder-lock after defending an armbar and looked close to being finished. However, he reversed Souza and caught him in the same submission attempt. Jacare methodically extricated himself from the lock and took top position on Lindland.

Lindland went for a triangle choke but could not lock it up, and Souza passed his guard. He immediately cinched an arm-triangle choke that forced Lindland to tapout 4:18 into the match. 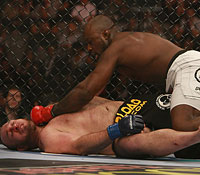 Muhammed "King Mo" Lawal nearly put the crowd to sleep for two and a half minutes but woke it up in a hurry when he removed Mike Whitehead from consciousness 3:08 into the first round.

The undefeated Lawal waltzed around the cage in what seemed like a continuation of his elaborate entrance dance before landing a vicious one-two combination that floored Whitehead. He followed the UFC veteran to the canvas and finished him with a barrage of right hands that forced referee Jon Schorle to intervene.