GRAND PRAIRIE, Texas -- Bellator Fighting Championships took a risk putting its featherweight titleholder, Joe Soto, in the cage against UFC veteran Diego Saraiva in a Bellator 19 non-title super fight on Thursday at the Verizon Theatre. In the end, Soto made sure it was a risk worth taking.

Soto sent a message to Joe Warren and Patricio “Pitbull” Freire, the two finalists in the 2010 Bellator featherweight tournament, with his first-round stoppage against Saraiva. The champion spent the first round in top control, as he moved through Saraiva’s kicks and punches and maneuvered around his opponent’s guard.

With 40 seconds left in the period, the undefeated Soto landed an elbow and opened a wicked gash on Saraiva’s forehead. In between rounds, the doctor called a stop to the fight. Saraiva had never before been finished.

Carl opened the fight with a hard kick to Hornbuckle’s sternum, drove him to the ground and pushed him against the cage. After he shook off the initial submission attempts, Hornbuckle caught Carl in the fight-ending arm lock 2:31 into the match. It was Hornbuckle’s second submission victory of the tournament; his triangle choke coaxed a tapout from Tyler Stinson at Bellator 15. 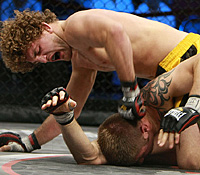 Askren did not waste any time standing with Thomas in their rematch, as he took the fight to the canvas quickly. From the opening bell, he controlled Thomas on the ground, as the UFC veteran’s guard stood no chance against his considerable grappling skills.

The unbeaten Askren landed a solid right hand to kick off the second round but again took the fight to the ground. Working from mount, he reached for armbars and even slipped Thomas into the crucifix position, though he failed to cinch anything of consequence or land any hard shots.

Despite Thomas’ efforts, which included a knee to Askren’s face, round three told a similar story. After regaining his composure, Askren again moved into the crucifix position and nearly sank a rear-naked choke. However, time ran out and Askren settled for a unanimous decision. All three judges scored it 30-27 in his favor.