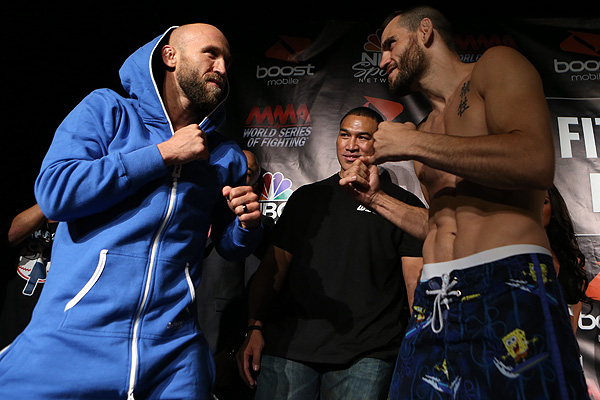 Josh Burkman and Jon Fitch could tussle for a third time. | Dave Mandel/Sherdog.com


If both Josh Burkman and Jon Fitch earn victories at World Series of Fighting 6, the welterweights are headed for a rubber match, according to a source close to the organization.

The plan is obviously contingent upon Burkman and Fitch navigating their respective tests at Saturday’s event, which takes place at BankUnited Center in Coral Gables, Fla., and airs live on NBC Sports Network.

Burkman will collide with Steve Carl in the show’s welterweight championship main event, while Fitch battles 11-year pro Marcelo Alfaya. Prior to the evening’s main card telecast, the undercard streams live and free on Sherdog.com.

Fitch and Burkman first met in the UFC in 2006, with Fitch using a second-round rear-naked choke to finish Burkman at UFC Fight Night 4 at Hard Rock Hotel and Casino in Las Vegas. “The People’s Warrior” avenged that defeat this past June, choking Fitch unconscious with a guillotine choke in just 41 seconds at WSOF 3, which, coincidentally, also took place at the Hard Rock.

Burkman exited the UFC in 2008 on the heels of three consecutive defeats but has since won eight of his last nine fights, kicking off his WSOF run by outpointing Gerald Harris roughly one year ago before stopping Aaron Simpson on strikes this past March. In Carl, Burkman faces a 23-fight pro who has submitted 15 of his 20 career victims, most recently choking out Tyson Steele at WSOF 3.

Long regarded as one of the world’s finest welterweights, Fitch has lost three of his last four fights. After suffering a 12-second knockout to current UFC title contender Johny Hendricks, Fitch rebounded with a unanimous decision win over Brazilian prospect Erick Silva but was released by the organization on the heels of his February decision defeat to grappling ace Demian Maia. Alfaya, meanwhile, has competed just twice in the last two years, most recently knocking out Valdir Araujo this past January under Florida’s Championship Fighting Alliance banner.