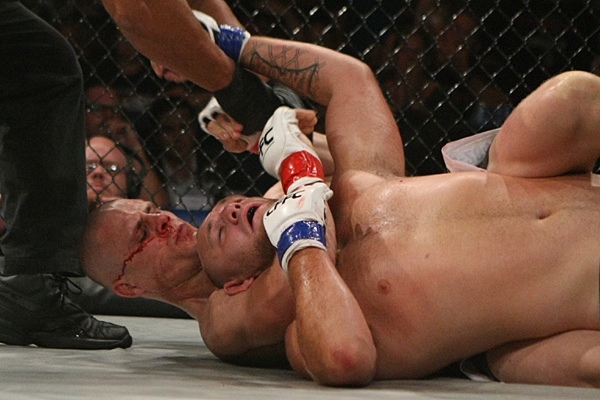 ATLANTIC CITY, N.J. -- After more than 14 months away from the cage due in part to spinal fusion surgery, Tim Williams returned in impressive fashion Saturday night at Cage Fury Fighting Championships 15.

Fighting at a catch-weight of 195 pounds in the CFFC 15 main event at Resorts Casino, “The South Jersey Strangler” overwhelmed Pennsylvania’s Lewis Rumsey from the opening bell. Less than 90 seconds into the bout, Williams had applied an arm-triangle choke that Rumsey managed to survive. The end came less than two minutes later, when Williams found a home for a tight rear-naked choke and forced Rumsey to tap at 3:05 of the opening round.

“It felt good,” Williams told Sherdog.com after the fight. “It was a little cloudy coming in the ring. I knew what I wanted to do. I never doubted anything, myself or my coming back to fight. It was just about getting healthy, strong and dominating people at my weight class. I knew I could submit him pretty quick.”

Having emerged from the Rumsey bout unscathed, Williams expressed a desire to fight for CFFC again at their next event in August. Now a perfect 7-0, however, any discussion of the middleweight prospect’s future inevitably turns toward the Octagon. With the UFC holding increasingly frequent events, the need for more fighters is always there. So, how does Williams manage expectations between the present and the future?

“If I’m in that spotlight and people want to put me in the UFC, I’m ready,” said the 25-year-old New Jerseyan. “I can’t wait to get into this full time. I’m a union carpenter. I still work full time. I can’t wait to make this transition, and then it’s time to really step up and just take on anybody.” 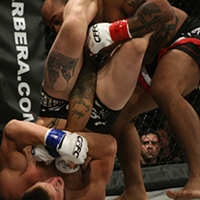 Keith Mills
Berzin stretched out Holmes.
In the evening’s light heavyweight co-main event, Philadelphia’s Anton Berzin made quick work of “Relentless” Danny Holmes. Berzin was relentless in his own right, fighting for a single takedown from the start of the match. After bringing the fight to the ground, Berzin parlayed his position into a tight armbar, forcing Holmes to tap and referee Dan Miragliotta to stop the bout at 2:37 of round one.

After another New Jersey promotion, Urban Conflict Championships, was forced to cancel its card earlier in the week, CFFC added two bouts from the event to their Saturday show. One of those matchups was in the 205-pound division, where “Irish Machine” Mike Stewart won his third straight by punching out Eric Tavares just 42 seconds into round one. The other adopted UCC fight saw welterweight Yusuf Yoldas overwhelm Darrius Heyliger en route to a triangle choke victory at 2:42 of the third round.

In an intriguing pairing of welterweight prospects, Jersey City’s Emmanuel Walo took on Bradley “Featherstone” Desir. It was also a battle of Army versus Marines, with Army man Walo emerging victorious in a three-round unanimous decision to hand Desir his first professional loss. Walo opened the bout like a ball of fire and pressed the action on Desir.

“That’s a credit to one of my coaches, Jamal Patterson,” Walo told Sherdog.com. “He said, ‘Make him realize he’s in a fight. It’s very imperative from the opening bell that you set the pace. Let him know that he’s fighting your fight.’ I didn’t want to fight a counter-fight. I kept moving forward. All in all, it worked out for me.”

Lightweight crowd favorite Robert Fabrizi came with flurries early and often in his firefight with Jeremy Uy. Soon after the bout started, Fabrizi scored a TKO victory, putting Uy down at 1:35 of the first round.

Controversy marred a catch-weight bout between “Chocolate Thunder” Shedrick Goodridge and Pennsylvanian Rex Harris. After an illegal knee from Harris in the opening round went unnoticed by referee Miragliotta, the cageside doctor called a stop to the bout before the start of the second, handing the TKO win to Harris.

Michael Murray found himself on his back at the start of the second round in his bout against Darren Mima. However, the Team Tiger Schulmann flyweight used the position to his advantage, locking on an armbar which made Mima tap 42 seconds into the round.