Welterweight champion Georges St. Pierre threw one jab and then another and then another. By the time the first round was over, the right eye of Josh Koscheck was nearly swollen shut. Somewhere, Larry Holmes smiled.

Some 20 minutes later, St. Pierre’s hand was raised once more.

Arguably the sport’s most dominant champion, he notched a lopsided unanimous decision against Koscheck in the UFC 124 headliner on Saturday at the raucous Bell Centre in Montreal. All three judges scored it 50-45 for the French Canadian, who has not lost a round in more than three years.

“I know Josh Koscheck likes to throw his punches circular, and I’m a straight puncher, so the issue was to keep him on the outside and, if he came too hard, to go for the takedown,” St. Pierre said. “But he’s a very good wrestler, and he’s very tough.”

Outside of a late first-round takedown and the occasional winging punch, Koscheck had no answer for St. Pierre. The 29-year-old, in the prime of a brilliant career, battered Koscheck with strikes, though he never strayed far from his weapon of choice. St. Pierre drilled the American Kickboxing Academy stalwart with a steady stream of piston-like left jabs that had Koscheck wincing in pain and shying away from his cutman. Targeting the eye, he fired away at will, mixing inside leg kicks, right crosses and left hooks behind the jab.

At the end of round four, it appeared as though the cage-side physician might call a halt to the bout, but he deemed Koscheck fit to continue. St. Pierre toyed with his wounded foe and delivered back-to-back takedowns in round five. He was utterly dominant, even though he could not finish.

“At the end, I saw his eye was closed, so I tried to go with hooks to take him out, but he’s very tough,” said St. Pierre, who has rattled off eight wins in a row. “I didn’t reach my goal tonight. My goal was to take him out. Sorry, everyone.”

A humbled Koscheck was uncharacteristically respectful following the fight.

“I’m not making any excuses,” he said, his eye mangled by 25 minutes worth of punishment. “Georges St. Pierre is a true champion. I tried to do what I could to hype the fight up. Montreal, this was an amazing event, regardless of the outcome. I appreciate everything. Thank you so much. I hope I can come here one day and put on a better show for you guys. St. Pierre is the man tonight.

“I came in to keep the fight on the feet and then obviously put him on his back,” Koscheck added. “He had a great game plan and executed it very well. It shows why he’s the number one pound-for-pound fighter in the world.”

Stefan Struve knows how to fight from the bottom.

The 6-foot-11 Dutchman swept a fatigued Sean McCorkle into full mount and stopped him with a torrent of punches and elbows from the top 3:55 into the first round of the UFC 124 co-main event. Struve has won five of his last six bouts.

McCorkle, who baited his 22-year-old foe with plenty of pre-fight rhetoric during the weeks leading into their encounter, scored with a takedown a little more than 30 seconds into the match and isolated Struve’s left arm. He threatened to finish with a kimura against the cage, but Struve scrambled free, reclaimed full guard and went to work on the sweep. Once the time was right, he reversed into mount against McCorkle and dropped strikes for the finish.

“You can talk trash all you want,” Struve said. “He’s a classy guy, though.” 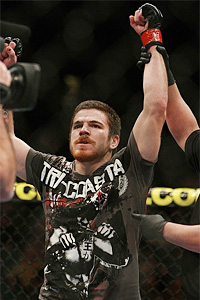 File Photo
Miller (above) scored a huge win.
AMA Fight Club standout Jim Miller posted his sixth consecutive win and continued his quiet but rapid ascent in the lightweight division, as he submitted the previously unbeaten Charles Oliveira with a first-round kneebar in a featured matchup at 155 pounds. The end came 1:59 into round one.

“I think a lot of people underestimated me coming into this fight,” said Miller, who improved to 8-1 inside the UFC. “He’s a tough kid with a ton of potential, but I’m one of the best in the world.”

Miller walked through three early head kicks, took the fight to the ground and defended a variety of submission attempts from the 21-year-old Brazilian prospect. The two lightweights went for dueling leg locks, but Miller cranked the kneebar in a blink and solicited a quick tapout from Oliveira, who winced in visible pain as his leg was torqued in the wrong direction.

“It happened too fast [for him to free his leg],” Miller said. “I just wanted to go out there and prove a point. I want my [title] shot.”

“The Ultimate Fighter” Season 6 winner Mac Danzig, his spot on the UFC roster perhaps on the line, sent Joe Stevenson to the showers with a clean counter left hook. The blow left Stevenson prone on the mat 1:54 into round one. A pair of hammerfists followed for good measure, but “Daddy” was already done.

“I’ve been landing that for years and years, and I never knew how to put power on it the right way,” said Danzig, who improved to 4-4 inside the Octagon. “I just started loosening up and landing it the way I’m supposed to.”

Stevenson, a judo and Brazilian jiu-jitsu black belt, never got the fight to the ground. Caught coming in, he fell face first at Danzig’s feet. Danzig, a 30-year-old Pittsburgh native, shook off an overhand right from Stevenson early in their encounter. He entered the cage with losses in four of his previous five bouts.

Former welterweight title contender Thiago Alves zeroed in on the lead leg of John Howard and overwhelmed the Boston native with timing, power and technique en route to a unanimous decision. All three judges scored it 30-27 for Alves, who snapped a two-fight losing streak.

Alves fired away with leg kicks from the outset, and his investment paid dividends, limiting Howard’s mobility and chipping away at his resolve. The 27-year-old American Top Team standout was in top form, as he attacked with a variety of offense, even mixing in takedowns in the first and second rounds.

Ahead on the scorecards, Alves fought with understandable caution in round three, though he dropped Howard with a straight right hand midway through the period. The two flurried on one another to end it, as Alves punctuated his first victory in more than two years with a combination of body and leg kicks.

“He’s a really tough guy,” Alves said. “I loved the matchup from the beginning. I knew with the right game plan I could out-scheme him.”