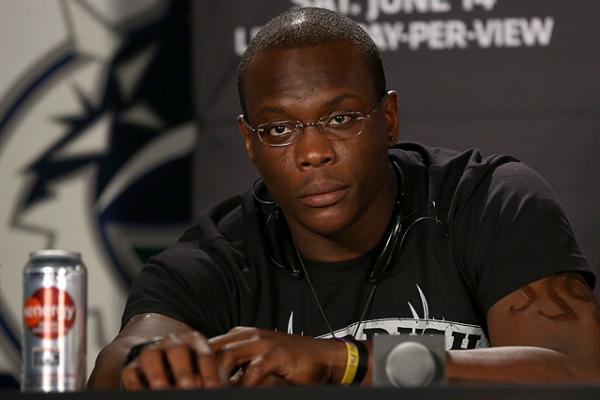 
Competing under the Ultimate Fighting Championship banner has been good for light heavyweight Ovince St. Preux, as he has won five of his first six bouts.

No fight was bigger for “OSP” than his most recent outing against Mauricio Rua at UFC Fight Night “Shogun vs. St. Preux,” a 34-second shellacking that not only pocketed the 31-year-old a $50,000 “Performance of the Night” bonus, but also allowed St. Preux to bounce back from his first UFC loss against Ryan Bader.

While on the surface it may look like St. Preux escaped free of injury against “Shogun,” the Knoxville MMA product suffered an injury that has kept him out of action ever since his second straight UFC main event.

“I partially tore a ligament in my hand during the ‘Shogun’ fight, so I have been getting that treated,” St. Preux told Sherdog.com. “I figured I messed it up a little bit. But the doctor told me I had torn a ligament, so I have been hanging out. I have to wait another three weeks before I can start fully training.”

St. Preux took the tilt against Rua on a week’s notice, scrapping his three-round bout against Francimar Barroso in favor of a spot in the five-round main event against a former UFC 205-pound champion. For St. Preux, the decision was a no-brainer and worked out in his favor.

“You have to see what situations present themselves, like with the ‘Shogun’ fight that’s a fight I always wanted,” St. Preux said. “He just has a name behind him. As a fighter you want to pick and choose your fights, but it doesn’t usually work out that way. But this time around everything worked out perfectly. I did what I needed to do, went in there, got my knockout, got paid, and that’s all she wrote.”

After the win, St. Preux surprised some mixed martial arts fans with his decision to call out Anthony Perosh and Fabio Maldonado as potential future foes. Little did those watching know that the move was a calculated one, as St. Preux feels as though both fighters would have been a great matchup for his strengths.

“When you fight in the UFC, it’s all about matchups. They are looking for matchups; I am looking for matchups too that favor me,” St. Preux explained. “The reason I did that is because if they would have gave me either of those fights I would have taken it. Why not? Wouldn’t you want an extra $50,000? Then on top of that, there is a difference between getting ready for an Anthony Perosh or Fabio Maldonado opposed to ‘Shogun.’ Who would you be more concerned about? When it comes down to it, it’s all about playing your cards correctly.

“I still have a couple more fights on my contract. If I can mark another one of those fights off, then that would be great,” St. Preux continued. “You want to give the fans a good fight, but at the same time the fans aren’t looking out for my livelihood. At the end of the day you want to put yourself in the best position possible.”

The aforementioned loss to Bader served as a wake-up call for the former Strikeforce competitor, leading to changes in his training regimen. While St. Preux would love to rectify his unanimous decision defeat, it’s not something that is keeping him awake at night.

“That Bader fight I was training, but I wasn’t training like I needed to,” St. Preux said. “I felt like my timing was off; I was sloppy and wasn’t pushing myself through drills like I needed to. I was cruising. I got a little complacent, but I learned a lot and feel like I’m much better now. I will get over it, but if the opportunity to have a rematch happened I would jump all over it.”

For the time being, St. Preux has been focused on healing his ailment, but it doesn’t mean he hasn’t kept an eye on the divisional landscape. In particular, a potential fight against a returning Quinton Jackson could align with “OSP’s” career aspirations quite well.

“That would be good. It’s all about positioning myself,” St. Preux said. “‘Rampage’ is a guy that is hard to knock out, but if you outwork him, you can beat him. That would be a good matchup.”

St. Preux hopes to continue his ascension through the light heavyweight ranks in the first quarter of 2015.

“I can match up with anyone in the top 10 or top 15,” St. Preux said. “I’ve been enjoying this win, but expect to see me in late March or early April.”