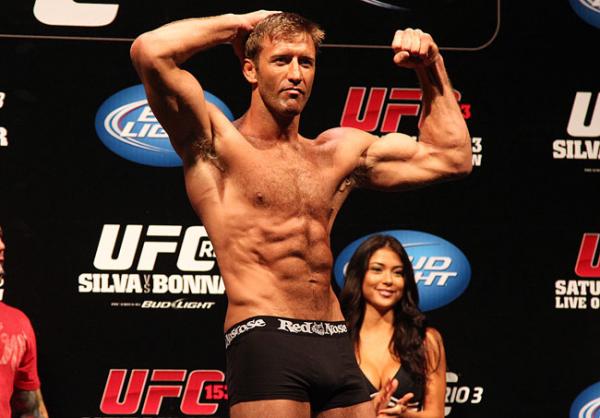 Stephan Bonnar and Dave Herman both failed their drug tests at UFC 153.

Bonnar tested positive for the anabolic steroid Drostanolone, while Herman was flagged for marijuana metabolites. MMAJunkie.com first reported the development, and Sherdog.com confirmed the results with Marc Ratner, UFC vice president of regulatory affairs, who also verified that all 24 fighters on the UFC 153 bill were tested for both performance enhancing drugs and drugs of abuse. As Brazil does not possess an athletic commission, the UFC once again acted as its own regulatory body at UFC 153. Fighter suspensions have not yet been issued.

UFC 153 took place Oct. 13 at the HSBC Arena in Rio de Janeiro and was headlined by Bonnar’s light heavyweight duel with longtime middleweight champion Anderson Silva. “The Spider” dispatched Bonnar in the first round, dropping “The American Psycho” with a knee to the body and finishing him off with ground-and-pound in 4:40.

Bonnar, who recently announced his retirement from active competition, previously tested positive in 2006 for a Boldenone metabolite after his UFC 62 rematch with Forrest Griffin. The 35-year-old veteran was suspended nine months and fined $5,000 by the Nevada Athletic Commission after that infraction was discovered.

Herman, meanwhile, was submitted by Antonio Rodrigo Nogueira in the evening’s pay-per-view co-headliner, tapping to a “Minotauro” armbar with just 29 seconds remaining in the second frame.

As with Bonnar, this also marks the second time that Herman has been flagged, as he was previously pulled from a UFC 136 matchup with Mike Russow one year ago when he tested positive for marijuana in a pre-fight drug screen administered by the Texas Department of Licensing and Regulation. Herman later denied using the substance.