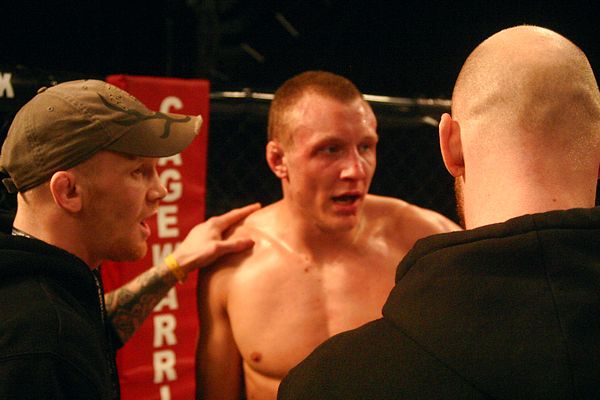 The bout topped a loaded 16-fight bill at The Forum in London, the first of what the leading English promotion envisions as an annual June holiday for fight fans. Ray and Warburton previously met in March 2013, with Warburton taking a unanimous decision after three rounds.

Ray did his best work with kicks in rounds one and two, reddening Warburton’s midsection and legs with whipping strikes from the southpaw stance. Despite being the taller man, Warburton had difficulty finding his range on the feet, as the legs of Ray kept the Englishman out of the pocket for the entirety of round three.

The Scottish “Bravehart” finally let his hands go in round four, but the closer exchanges allowed Warburton to connect with hard right hands of his own, bloodying Ray’s nose. Ray scored the fight’s only takedown in round five, though Warburton stood immediately to continue the standup battle. Ray was the busier fighter down the stretch, his leg kicks and clubbing overhand lefts preventing Warburton from mounting any significant offense in the bout’s closing moments.

After 25 minutes, judges David Lethaby and Mark Collett saw the fight for Ray with respective scores of 50-45 and 48-47, while Ben Cartlidge’s scorecard read 48-47 in Warburton’s favor. The split decision marked Ray’s sixth win in his last eight outings, with his only defeats in that stretch coming against Warburton and ex-champ Ivan Buchinger, who was recently released over a contract dispute.

Onetime “The Ultimate Fighter” competitor Bola Omoyele seemed to have the situation in hand as he used a heavy top game to pin Jack Marshman to the ground through the first round of their middleweight tilt. Marshman had a surprise in store, however, as the Welsh fighter seized hold of Omoyele’s punching right arm and extended it, forcing “Cashflow” to submit to an armbar at the 4:51 mark.

Mohsen Bahari earned the most significant victory of his career in a bloody three-rounder with UFC veteran Ben Alloway. The Norwegian welterweight took control of the action by tagging Alloway with crisp strikes from range before moving to the clinch, where Bahari used vicious knees and elbows to worsen a faucet-like cut between the Australian’s eyes. Bahari netted a split decision, with two judges awarding him scores of 30-27, while the third judge believed Alloway won all three rounds.

Jake Bostwick ran into trouble even before his fight with Simeon Thoresen began, as officials forced the British welterweight to remove his tongue piercing before entering the cage. When the action got underway, Bostwick looked to take off Thoresen’s head with an endless barrage of power punches. Thoresen’s best moment came at the end of round two, when he cranked a painful-looking mounted kimura on Bostwick’s left arm. The submission attempt may have sapped “The Grin” of his energy, as Thoresen spent the final round continuously flopping to guard, leaving Bostwick to claim scores of 29-28, 29-28 and 28-28 for a majority decision.

Jack Mason weighed in two pounds heavy for his welterweight encounter with Bruno Carvalho, but if the British fighter had a tough cut, it hardly showed in his performance. Despite eating some hard right hands from Carvalho in round one, Mason came alive and took control in the second. “The Stone” still had plenty of energy in the final round, a closely contested five minutes spent on the feet, where Mason landed enough punches to capture a split decision (29-28, 29-28, 28-29).

After a strong opening round from Martin Delaney, lightweight Damir Hadzovic turned the tables by repeatedly stuffing takedown attempts and forcing the Scotsman to the ground. “The Bosnian Bomber” blasted Delaney with nonstop ground-and-pound in the final two frames to garner scores of 29-28 from all three judges.

In the first title fight of the evening, Norway’s Jack Hermansson and France’s Norman Paraisy vied for the Cage Warriors middleweight strap recently vacated by Jesse Taylor. It looked as though Hermansson would end things early as he bloodied Paraisy with punches against the fence. Paraisy proved remarkably durable, withstanding more massive body-head combinations to score a desperate takedown in the second stanza. Both men tired as the fight entered the championship rounds, but Hermansson remained tenacious and switched to a ground-based attack which netted him a rear-naked choke submission and a shiny new belt at 4:49 of round four.

Joanna Jedrzejczyk spoiled the return of former Cage Warriors women’s champion Rosi Sexton, who had no answer for the Polish slugger’s punching power. After a couple of close calls in the opening frame, Sexton went down for the count courtesy of a straight right from Jedrzejczyk at 2:36 of round two.

Lightweight Tim Wilde kept his perfect record intact, but Australian import Damien Brown did not make things easy for “The Experiment.” Brown survived an eye poke, punches to the back of the head and a near stoppage from a huge knee to the jaw, surging in round three to threaten Wilde with rear-naked and guillotine chokes. Wilde persevered, however, and moved his mark to 5-0 with scores of 29-28 across the board.

Upset-minded “Polish Zombie” Marcin Wrzosek came to London with the perfect plan to hand featherweight prospect Arnold Allen his first career defeat. Pressure was the name of the game for Wrzosek, whose constant clinches, takedowns and pocket punches left Allen few chances to get back in the fight. The Englishman came close to finishing an arm-triangle choke in the waning moments of the final round, but Wrzosek withstood the submission to earn a unanimous nod from the judges (30-27, 29-28, 29-28).

Graham Turner took advantage of Suleiman Bouhata’s lack of cage experience by wearing down the French featherweight with some rough clinching on the fence. “Afterburner” opted to strike from range at the start of round three, and the tactic paid off as he dropped Bouhata with a grazing right cross to the liver and swarmed with follow-up punches to force referee Rich Mitchell into action at 1:08.

Brad Wheeler and Jason Cooledge both looked to be gunning for a knockout as they engaged in a toe-to-toe slugfest for the better part of two rounds, but the lightweight contest would ultimately end in a submission. The MMA Clinic’s Wheeler scored a knockdown with an uppercut and right straight midway through round two, and then jumped on Cooledge’s back to cinch a rear-naked choke at the 3:27 mark.