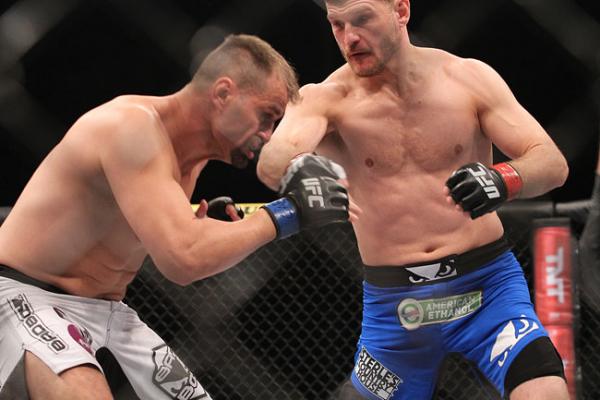 
Stipe Miocic made the best of an awkward situation.

Facing a an undersized opponent on short notice, the Ohio-based heavyweight performed as one might expect he should, as he stopped Fabio Maldonado -- a natural light heavyweight -- via technical knockout just 35 seconds into the opening frame of their heavyweight main event bout at the “The Ultimate Fighter: Brazil 3 Finale” in Sao Paulo, Brazil, on Saturday night.

“I was really nervous, that guy is a tank. He keeps coming forward. He doesn’t stop. He’s got the heart of a lion,” said Miocic, who was originally scheduled to face Junior dos Santos until “Cigano” bowed out of the fight with an injury.

Miocic (12-1, 6-1 UFC) didn’t need long to assert himself. The Strong Style Fight Team representative buckled the former professional boxer with a left hook almost immediately. Although a backpedaling Maldonado (21-7, 4-4 UFC) appeared to be hurt by the blow, Miocic chose to err on the side of caution at first.

“Me and my coaches went over it again and again. He can get rocked at the beginning, but he comes back stronger,” Miocic said. “I didn’t want him to play possum with me, so I just waited for an opportunity and I got it.”

The patient approach paid off, as Miocic dropped the Brazilian with a right cross to the temple moments later. About eight unanswered hammerfists on the ground would follow before referee Mario Yamasaki intervened, marking the first time that Maldonado had been stopped by strikes (the loss to Glover Teixeira at UFC 153 was a doctor stoppage) in 28 pro fights. 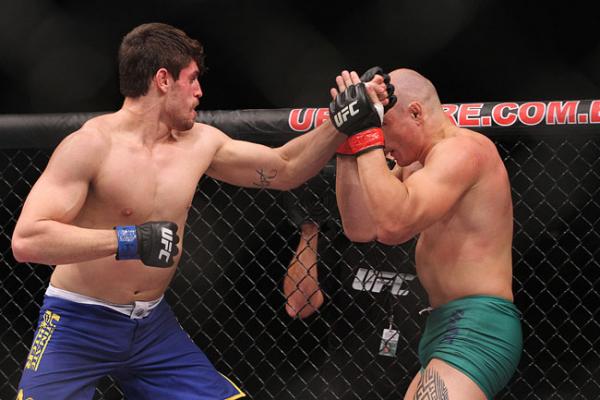 Photo: G. Venga/Sherdog.com
Carlos Jr. is off to a quick start in MMA.
Antonio Carlos Jr. may be undersized, but he was plenty big enough to capture “The Ultimate Fighter Brazil 3” heavyweight crown.

“This is a very special night for me, I’m really happy to be here in front of all my family with the crowd shouting my name,” Carlos Jr. said. “Vitor is a very strong fighter -- he really deserves to be here tonight.”

The 24-year-old known as “Cara de Sapato” landed takedowns in each round and largely neutralized Miranda’s striking prowess. Carlos Jr., meanwhile, was able to smoothly integrate his striking and wrestling, often transitioning from combinations on the feet to takedowns. 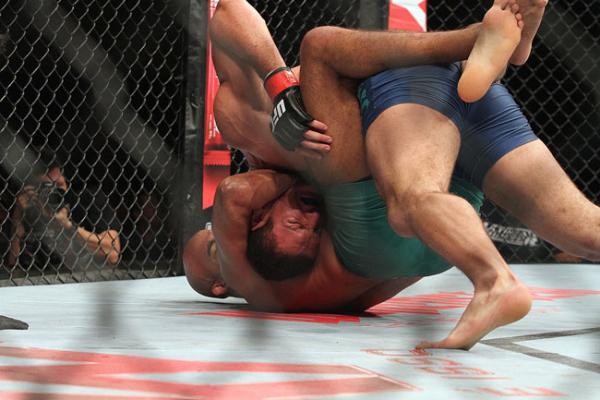 Photo: G. Venga/Sherdog.com
Alves put Alexandre to sleep with a choke.
Warlley Alves became the middleweight winner of “The Ultimate Fighter: Brazil 3,” as he submitted Marcio Alexandre Jr. with a guillotine choke. The contest ended 25 seconds into the third round, as Alves rocked his foe with a counter overhand right before securing the finish.

The 23-year-old Alves rarely gave the karateka nicknamed “Lyoto” room to breathe. The four-time Jungle Fight veteran dropped Alexandre with an overhand right in round one and consistently punctuated his combinations with clinches and takedowns. On the mat, the X-Gym representative attacked with heavy ground-and-pound.

Alves (7-0, 1-0 UFC) continued to wear his foe down with constant pressure right up until the end. Alexandre (12-1, 0-1 UFC) struggled to mount anything in the way of meaningful offense, as a final desperation takedown attempt resulted in him being trapped in Alves’ guillotine choke. 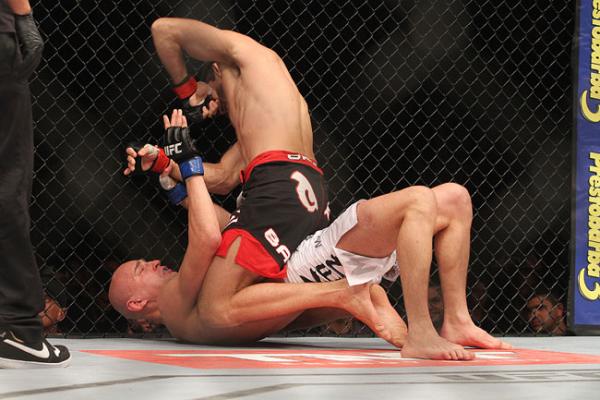 Photo: G. Venga/Sherdog.com
Maia dominated Yakovlev for 15 minutes.
After back-to-back losses removed him from the welterweight title discussion, Demian Maia badly needed to get back into the win column. As it turned out, Octagon rookie Alexander Yakovlev was the unfortunate victim in his way.

The former Abu Dhabi Combat Club Submission Wrestling World Championship gold medalist authored a dominant performance, as he mounted Yakovlev in every round en route to cruising to a unanimous verdict. All three judges scored the fight 30-27 in favor of Maia (19-6, 13-6), who improved to 4-2 in the UFC at 170 pounds.

“I fought very hard to try to get a submission but I wasn’t able to do so,” Maia said.

Yakovlev did well to make it to the judges. Maia dropped his foe with a left hand in the opening frame and moved seamlessly to full mount. He spent the rest of the frame unloading with elbows and punches from top position, but Yakovlev (21-5-1, 0-1 UFC) proved to be resilient. Despite being in a number of precarious positions, the Russian had positive moments, most notably reversing Maia from mount and moving into top position himself in round two. However, Maia controlled the positional battle for the majority of the bout. 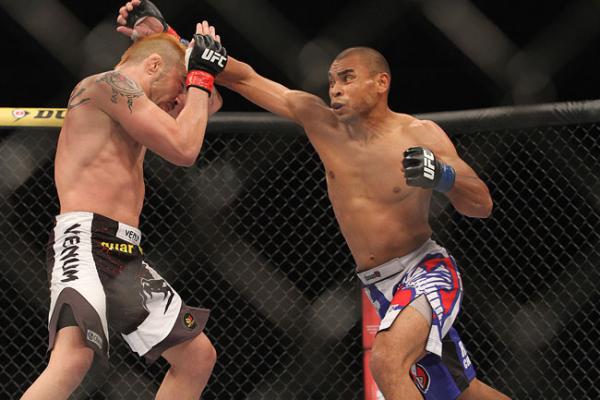 Photo: G. Venga/Sherdog.com
Peralta slipped by Bezerra.
Robbie Peralta disappointed the Brazilian faithful, as he took a closely-contested split verdict against “TUF: Brazil 1” winner Rony Mariano Bezerra in a featherweight affair. Two judges scored the bout 30-27 -- one in favor for Peralta and the other for “Rony” Jason -- while a third scored it 29-28 for the American.

Peralta (18-4, 4-1 UFC) was able to land with more volume than his Brazilian opponent over the course of the 15-minute clash. “Problems” controlled distance with leg kicks, won his share of scrambles on the mat and held his own in a couple of firefights.

Bezerra (14-5, 4-2 UFC) had his moments as well. He landed a spinning back elbow in round one, attacked with jumping knees and threatened with submissions on the mat. However, it was Peralta’s sporadic bursts of aggression that ultimately made the difference. 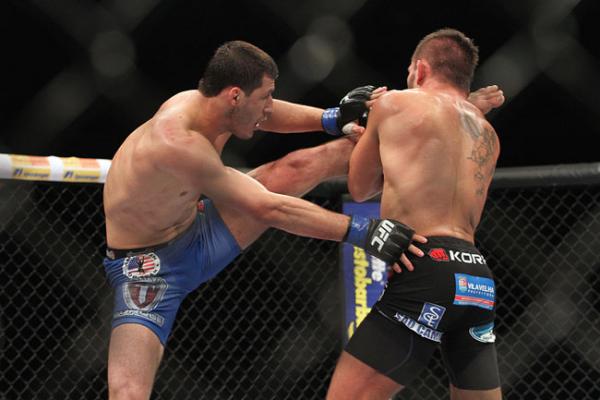 Damm (12-7, 3-2 UFC) never really got on track against the former M-1 Global champion. Magomedov (17-1, 2-0 UFC) kept Damm at bay by consistently landing kicks to the legs and body. A hard left jab followed by a right behind the ear dropped the Brazilian in round one, but Magomedov refused to dive into his foe’s guard as time expired.

Magomodev continued to control the range with hard left kicks to the body and effective counter-punching combinations in the second frame. Damm picked up the pace in the final period, but it was not nearly enough to sway the fight in his favor. 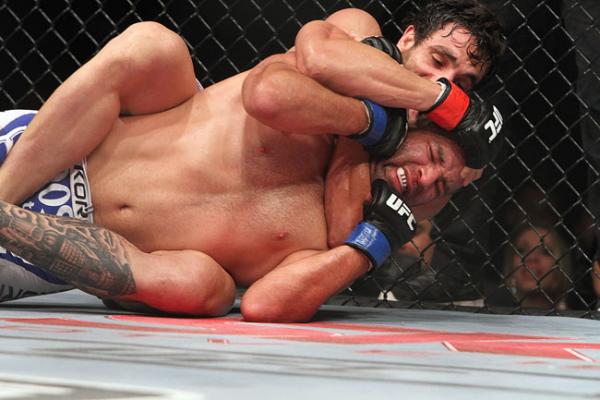 Photo: G. Venga/Sherdog.com
Silverio put away Chavez with a choke.
Former Jungle Fight welterweight king Elias Silverio earned his third straight UFC victory, submitting Ernest Chavez with a rear-naked choke in the third stanza of their lightweight tussle. After a promising beginning, Chavez (7-1, 1-1 UFC) asked out of the fight 4:21 into round three.

Chavez kept Silverio off balance thanks to clever movement in the opening round, but he was unable to maintain that pace as the bout progressed. Silverio began to assert himself in round two by controlling the range with his jab and a variety of kicks.

While Chavez was able to hold his own against his larger foe in the clinch, that approach took its toll on his offensive output.

Silverio (11-0, 3-0 UFC) put his foot on the gas pedal in round three, landing a spinning back kick and peppering the Californian with punching combinations. A final clinch attempt from Chavez proved disastrous, as Silverio reversed the position, took his back and secured the rear-naked choke. 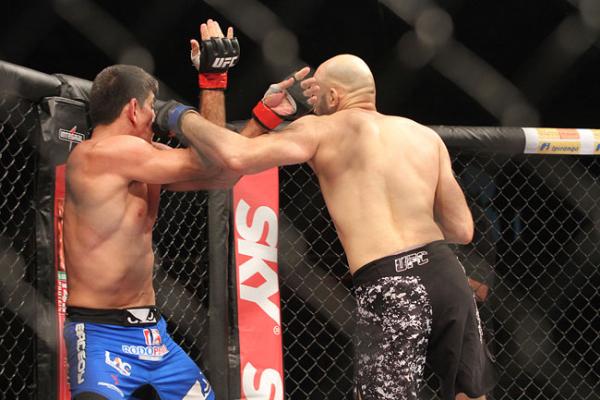 Photo: G. Venga/Sherdog.com
Umalatov took two rounds from Thiago.
Welterweight prospect Gasan Umalatov utilized a physical approach to take a unanimous verdict over Paulo Thiago. Two cageside judges scored it 30-27 in favor of Umalatov, while a third saw in 29-28 for the Russian.

Thiago (15-7, 5-7 UFC) expended a great deal of energy attempting to drag Umalatov (15-3-1, 1-1 UFC) to the canvas in the opening two frames, but he did not land his first takedown until less than 20 seconds remained in the second. By then, the Russian fighter had already built a lead on the scorecards behind clinch work, takedowns and the occasional well-timed power punch.

Thiago appeared to finally get comfortable in the third round, but he was unable to land anything of significance to alter the course of the bout. The former world-ranked welterweight has now lost four of his last five Octagon appearances. 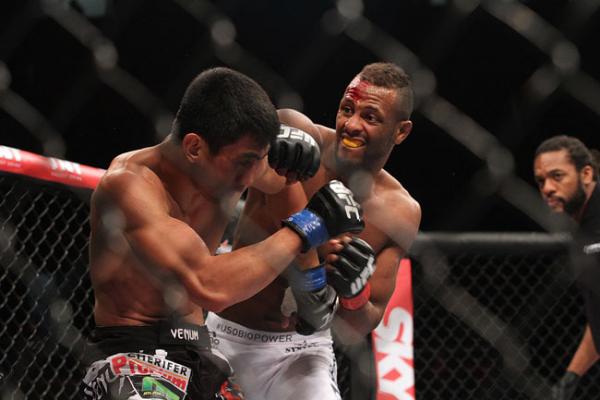 Photo: G. Venga/Sherdog.com
Souza mauled Eddiva with punches.
A relentless punching barrage carried Edimilson Souza past Mark Eddiva in a featherweight matchup. The end came 4:52 into the second frame, as Souza teed off with heavy unanswered punches to the head and body of his Filipino opponent.

The slugfest started early when Souza found a home for two solid left hooks in round one, and the Brazilian ended the frame unloading with punches against the shorter Eddiva near the fence.

Eddiva (6-1, 1-1 UFC) appeared to slow his adversary’s movement with a steady diet of kicks to the Brazilian’s lead leg to begin round two. However, Souza (15-3, 2-0 UFC) would eventually find his rhythm again, trapping Eddiva against the fence with another furious salvo of punches to earn the stoppage. 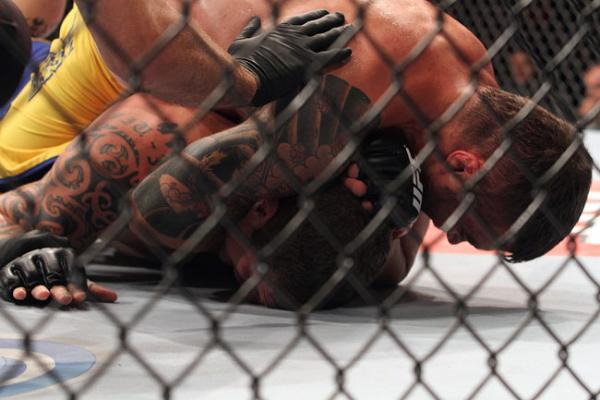 Photo: G. Venga/Sherdog.com
Abreu tapped Silva with an RNC.
Two-time world jiu-jitsu championship silver medalist Ricardo Abreu submitted Wagner Silva with a rear-naked choke in the second round of a middleweight tilt. The end came 1:06 into the period, as “Demente” transitioned to his opponent’s back to elicit the tapout.

Powerful overhand rights were Abreu’s weapon of choice throughout the bout. The Wand Fight Team member dropped Silva in the opening frame but was unable to finish. In round two, Abreu (5-0, 1-0 UFC) capitalized on Silva’s (3-1, 0-1 UFC) aggression to drop his man once again with another big right hand.

Abreu then moved into full mount and dropped heavy punches on his opponent before transitioning to the fight-ending choke. 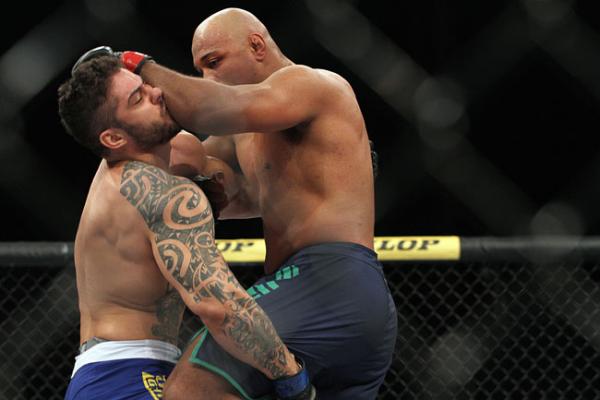 The muay Thai specialist began the action by throwing a head kick before quickly initiating the clinch against Moreira. De Lima (12-2-1, 1-0 UFC), who held a significant size advantage over his opponent, landed a couple of knees in close quarters before connecting flush with a straight right hand when the two combatants separated.

The punch sent Moreira (7-2, 0-1 UFC) tumbling to the canvas, and de Lima needed only a couple follow-up blows before referee Wernei Cardoso intervened to halt the bout.

“That’s exactly what I was training in camp,” de Lima said through a translator. “That worked out, so I have to thank all of my team.” 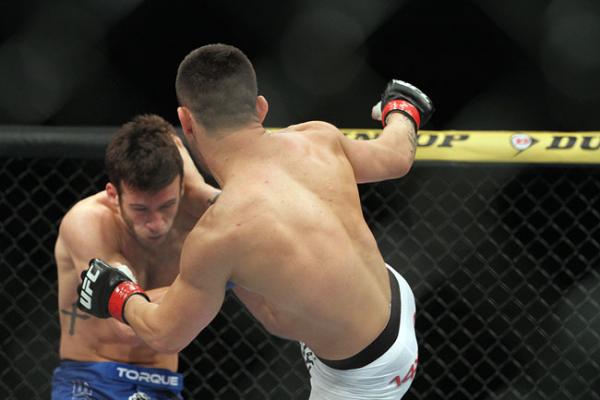 Photo: Gleidson Venga/Sherdog.com
Munhoz applied pressure early on Hobar.
Brazilian prospect Pedro Munhoz earned his first UFC triumph in impressive fashion, stopping former Legacy Fighting Championship titlist Matt Hobar in the first round of their bantamweight clash. A series of standing-to-ground shots from Munhoz brought a halt to the contest at the 2:47 mark of round one.

Munhoz (11-1, 1-1 UFC) set the tone by staggering his opponent with a head kick early in the round, and Hobar (8-2, 0-1 UFC) never recovered. The Blackhouse MMA member was unable to secure a guillotine choke, but he kept the pressure on.

With the fight back on the feet, Munhoz wobbled Hobar with a right hand and immediately followed with a takedown. From there, “The Young Punisher” passed guard and sealed the victory with heavy punches from above.