Nate Moore bounced back from a trying first round to finish his fight early in the second, as he knocked out Nathan Coy just 25 seconds into the second frame of their preliminary welterweight matchup at Strikeforce “Diaz vs. Cyborg” on Saturday at the HP Pavilion in San Jose, Calif.

In the first round, Moore nearly took Coy’s back and appeared to be in total control. Coy turned the tables as the round wore on, however, using a dominating front headlock to dictate the action. The American Kickboxing Academy product then dropped for a kimura, but Coy defended it well before landing some solid ground-and-pound.


Advertisement
Round two was over as quickly as it started, as Moore stiffened up the Team Quest representative with a sharp right hand and followed with another big shot on the ground, forcing the referee to intervene.

Meanwhile, Isaiah Hill submitted Bobby Stack with a triangle choke just 62 seconds into their lightweight contest. The victory snapped a six-fight winless streak for Hill, who had not won about in nearly four years.

Hill held nothing back from the get-go, launching a spinning heel kick followed by two potentially fight-ending flying knees. Stack dived for a single-leg takedown, and, after a considerable struggle, he managed to put Hill on his back. His triumph was short-lived, however, as Hill cinched a speedy triangle choke to seal the deal and earn the win.

AKA representative Ron Keslar scored the night’s first submission, as he finished Eric Lawson with a first-round armber 1:57 into the match.

After the pair tied up in the clinch to start, Keslar immediately took Lawson’s back when the fight hit the floor and trapped one of his opponent’s arms, a la B.J. Penn. From there, Keslar transitioned to a triangle choke attempt but eventually isolated Lawson’s arm, cranking it for the submission. 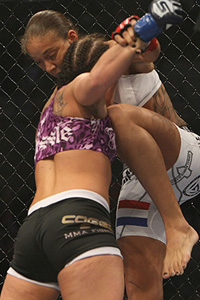 Kickboxing phenom Germaine de Randamie earned a violent victory , as she knocked out an overmatched Stephanie Webber 4:25 into the opening frame.

Though Webber closed the distance and took the fight to the floor, de Randamie used an attempted triangle choke to return to her feet. Once she recovered her vertical base, de Randamie landed a nice punching combination followed by knees from the clinch that spelled disaster for her opponent.

On an undercard filled with quick finishes, James Terry followed suit, as he stopped Lucas Gamaza at 3:26 of the first frame.

Terry dominated the fight on the feet, staggering his opponent with combinations. Though Gamaza proved resilient, Terry was too much for him to handle. He landed a big counter right hand and finished the bout with punches to a turtled Gamaza’s head.

In the show’s opener, kickboxing ace Jenna Castillo knocked out Charlene Gellner 3:57 into the second frame of their 120-pound catchweight contest.

After delivering an early onslaught of knees from the clinch, Castillo was pulled into Gellner’s guard. Though Gellner attempted multiple submissions, Castillo kept herself safe. In the second stanza, Castillo again exploded on the feet, stunning Gellner with a right hand and then crumpling her with a pair of knees for the finish.

This item was updated at 1:19 a.m. ET to correct information on de Randamie. Tonight's fight was not her MMA debut, as Sherdog.com had reported.