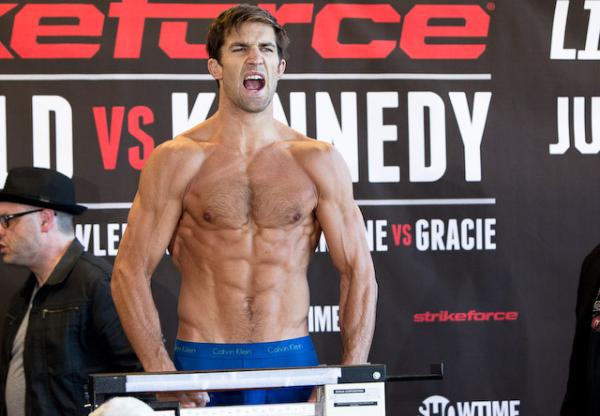 Luke Rockhold defended his Strikeforce middleweight title for the second time Saturday night in the main event of Strikeforce “Rockhold vs. Kennedy” by outpointing Tim Kennedy at the Rose Garden in Portland, Ore.

Rockhold utilized his reach effectively throughout five rounds, using his superior length to keep Kennedy on the end of his punching range. However, though he managed to floor the Jackson’s MMA representative in round four, Rockhold could not find a finish against his durable opponent.

“Tim Kennedy is a real tough dude. I think we could compete with anybody out there in the top 10 and beat them,” Rockhold told Showtime Sports following his performance. “He’s tough as nails. I tried to put him away. I know I hit him once pretty good and dropped him, but he recovers quick. It’s proven -- nobody has been able to put him away.”

As Rockhold pressed the action for most of the contest, Kennedy looked to counterpunch while moving in and out of range. Despite trading evenly with the ever-active champion in several exchanges, Kennedy found himself unable to land a tide-turning blow that might have changed the fight’s outcome.

“[Kennedy has an] awkward striking style. He’s hard to read and he’s backing up a lot, and it’s hard to reach him,” said Rockhold. “He’s decent at countering, and you don’t know if he’s going to wrestle or strike. I was a little wary of both and, obviously, I got caught a few times.”

The prevailing wisdom before the contest was that if Kennedy could plant Rockhold on his back throughout the 25-minute affair, the challenger might walk out with the belt. Kennedy’s success in that department proved limited thanks to Rockhold’s concentrated focus on improving his wrestling during training camp.

“[I trained to] wrestle first. A lot of times, guys get on my legs and I try striking. I try pogo-sticking on one leg and try to hit them, which just gets me in trouble,” said Rockhold. “This fight, it was wrestle first, strike second. That was the major success of this fight. I wrestled hard, and wrestling camps are always the worst, but wrestling is the biggest equalizer in all of fighting.”

While it is unclear exactly what currently lies ahead for Strikeforce’s middleweight ace, the American Kickboxing Academy standout says that he should have no shortage of willing challengers, one of whom could be Ronaldo Souza, the man he outpointed to win the belt back in September. Regardless of whom he faces, Rockhold says he plans to hold onto his title for some time.

“[There will be] many more [defenses] to come. I’m not giving it up. I’ll be damned if anybody takes this belt from me,” said Rockhold. “There are quite a few new middleweights in the division now, like Lorenz Larkin and Roger Gracie, but I think ‘Jacare’ is the most likely challenger, as long as he wins [his August bout against Derek Brunson]. Our fight needs closure, and I’d like to have a chance to finish it.”