UFC veteran Jorge Gurgel rebounded from back-to-back defeats, as he submitted Billy Vaughan in just 44 seconds in a preliminary lightweight duel at Strikeforce “Feijao vs. Henderson” on Saturday at the Nationwide Arena in Columbus, Ohio.

Known for ignoring his considerable grappling ability in favor of engaging in stand-up wars, Gurgel did not have the opportunity to box in this one, as Vaughan immediately shot in for a takedown. Moments later, Gurgel jumped guard and cinched his fight-ending guillotine choke.

Gurgel, a Brazilian jiu-jitsu black belt, had not secured a submission since he put away Jason Ireland with a guillotine choke under the King of the Cage banner more than six years ago. 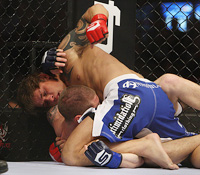 After a dominating first round that saw Bowling nearly finish the fight with a rear-naked choke, Thornburg performed a little better in round two, briefly scoring top position before “Relentless” again took control. Round three saw Bowling continue to dictate the action, although his ultra-tough opponent nearly locked up a guillotine as the round expired.

Scores read 30-27 across the board for Bowling. 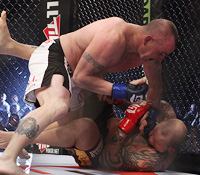 Jay Freeman took home an improbable, come-from-behind victory in the only heavyweight tilt, as the King of the Cage alum leveled Jason Riley with a right hook that sent the “Juggernaut” packing in the first round.

It was Riley, however, who drew first blood, as the Strikeforce veteran dropped Freeman with a right of his own in the early going. After surviving the onslaught from his back, Freeman escaped the position and caught an overzealous Riley on his way in, crumpling his foe and finishing the job with hammer fists at 1:52 of round one. 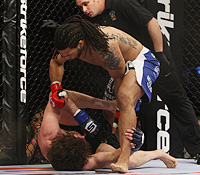 Early on, it became clear the middleweight contest was a mismatch, as “The Predator” battered Rammel with punches and knees before dropping him with a straight right. After being allowed to stand, Rammel attempted some offense, even landing a spinning back fist, but Rogers would have none of it. The Strong Style Fight Team product again floored Rammel with a combination and finished the job with ground-and-pound at 4:23 of the first frame. 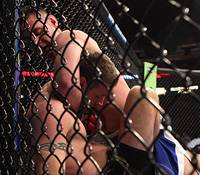 Journeyman Mitch Whitesel stopped a five-fight losing streak, as the Wreckroom Athletics product submitted the less-experienced Marc Cofer with a guillotine choke at 3:55 of the opening round.

After some inside fighting against the cage, Cofer attempted a throw but could not hold control his foe to the mat. Whitesel ended up on top and gradually found the leverage needed to finish the fight with his top-side guillotine against the fence. 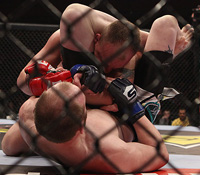 Dave Mandel
Felty (bottom) choked Kuhner out.
In the show’s seminal bout, John Kuhner picked up his first victory as a professional mixed martial artist, as he finished the debuting John Felty with a second-round triangle choke.

The opening round of the welterweight contest likely belonged to Felty, as he scored multiple takedowns and nearly took his opponent’s back. Round two was all Kuhner, however. After some give-and-take grappling early in the period, the EliteXC veteran mounted his foe and rained down heavy ground-and-pound before locking up a triangle and forcing Felty into unconsciousness at 4:31 of the second stanza.