One problem: referee Herb Dean elected not to call the tapout at the bell, allowed the fight to proceed and left Cavalcante to sweat out a decision. The 28-year-old Brazilian was awarded a split verdict, as all three judges scored it 29-28, two of them in his favor.


Advertisement
The two lightweights traded barbs standing, jockeyed for position in the clinch and largely fought to a stalemate for much of their 15-minute encounter. Rounds one and three could have gone either way, but the second period was not in dispute. There, they exchanged takedowns, but Cavalcante (16-4-1, 2 NC, 1-1, 1 NC SF) made the most of his, as he transitioned to full mount late in the round and forced Green to his knees with punches. The choke came next, followed by the tapout, but Green (15-5, 0-1 SF) was saved by the bell.

Cavalcante threatened to finish it again as the fight drew to a close, latching a guillotine choke and pulling guard in the third round. Green escaped, however, sending it to the judges.

Bellator Fighting Championships veteran Tyler Stinson knocked out Eduardo Pamplona in the first round of their brief but shocking preliminary welterweight bout. The Brazilian hit the mat unconscious just 15 seconds into round one, his 10-fight winning streak a thing of the past.

Stinson (21-7, 1-0 SF) wasted no time getting to work. He shook the 35-year-old Black House representative with an early combination, reset himself and unleashed the punch that shut down Pamplona. Stinson followed with a hammerfist for good measure, as referee “Big” John McCarthy moved in to save the Brazilian from further damage. The defeat was the first for Pamplona (15-3, 1-1 SF) in more than four years. 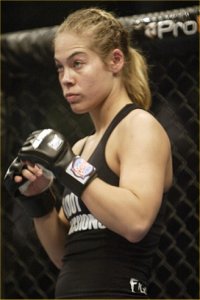 Julie Kedzie File Photo
Davis edged Kedzie on the score cards.
Former Raging Wolf champion and Brazilian jiu-jitsu brown belt Alexis Davis made the most of the opportunity in her promotional debut, as she controlled EliteXC veteran Julie Kedzie from the clinch and took a unanimous decision in a preliminary women’s welterweight duel. All three cageside judges scored it for Davis: 29-28, 30-27 and 30-27.

Davis (10-4, 1-0 SF) was relentless in her pursuit and execution of the clinch, as she often smothered Kedzie against the cage. She secured two second-round takedowns, took Kedzie’s back from a standing position and worked for a rear-naked choke. Her efforts to finish went unrewarded, but Davis methodically built her lead on the scorecards.

A Jackson’s Mixed Martial Arts representative, Kedzie fared no better in round three, as Davis overwhelmed her with strength and technique. Outside of a few punching combinations and some close-quarters knees, Kedzie (16-9, 0-1 SF) could not muster the offense she needed. The defeat snapped her four-fight winning streak.

Undefeated middleweight prospect Derek Brunson finished Lumumba Sayers with a rear-naked choke, putting a wrap on an entertaining firefight 4:33 into the first round of their middleweight dark match.

Brunson (8-0, 2-0 SF) scored with two slams, took back mount and invited several wild exchanges. The 27-year-old Renzo Gracie protégé staggered Sayers (4-2, 0-1 SF) with a head kick, followed up with punches and cinched the choke soon after the fight spilled to the ground. Brunson has stopped seven of his eight foes inside one round.

After a shaky start, Salinas-Jones (5-0, 1-0 SF) turned the tide late in round one, as he mounted Humes, battered him with punches and forced him to his stomach. He mounted the visibly fatigued Humes again in round two, only to be met with unexpected adversity in the third, as Humes (6-2, 0-1 SF) floored Salinas-Jones with a right hand. However, Salinas-Jones fought off an attempted choke, sprang a reversal on the ground, moved to top position and locked in the brabo choke for the finish.

Editor’s Note: This story was updated at 4:38 p.m. ET on July 31 to reflect the fact that Green was saved by the bell and not by referee error in the second round.
Related Articles
Latest News
ALLUFCBELLATORPFLONE