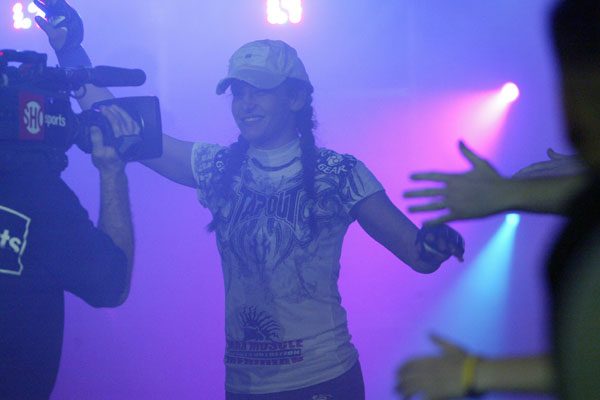 Julie Kedzie was closing in on the most significant victory of her career, but Miesha Tate had one last trick left in her bag.

Tate (13-3, 6-2 Strikeforce) submitted the Jackson’s Mixed Martial Arts veteran with a third-round armbar in a terrific women’s bantamweight scrap at Strikeforce “Rousey vs. Kaufman” on Saturday at the Valley View Casino Center in San Diego. The former 135-pound champion finished it in dramatic fashion 3:28 into round three.

“She’s a vet. She’s been in this longer than pretty much anyone here fighting tonight, and she really brought it,” Tate said. “I think she knew this was a big fight, and she came out better than I’ve ever seen her.”

Kedzie (16-11, 0-2 Strikeforce) was brilliant for much of their encounter. She blasted Tate with aggressive punches and kicks in the first round, survived a pair of deep choke attempts in the second and nearly knocked out her adversary with a head kick in the third. That strike, however, led to her undoing. Kedzie followed the dazed Team Alpha Male representative to the mat and attacked with hammerfists and elbows inside guard. In a blink, Tate pushed off the cage and rolled for the armbar. A battle of wills ensued, as Kedzie defended the hold for roughly two minutes. Tate adjusted her grip multiple times before finally coaxing the tapout.

“I worked a lot on my ground game,” Tate said. “I felt good when I got that armbar. I really had to work hard for it, but I wasn’t going to give it up for anything.”


Chechen import Adlan Amagov won for the fifth time in six appearances, as he stopped Keith Berry on first-round punches in an undercard duel at 185 pounds. The end came 48 seconds into round one and was not without controversy.

Amagov (10-2-1, 3-1 Strikeforce) backed up his foe with a spinning back kick to the gut and followed an instant later with a kick to Berry’s knee. The blow appeared to hyperextend the joint and sent Berry (11-10, 0-3 Strikeforce) to the canvas with Amagov in pursuit. He swarmed with punches, and referee Herb Dean stepped in when the Californian attempted to verbally communicate with him, all while defending himself.

Yamanaka (12-2, 0-1 Strikeforce) relied heavily on the clinch but failed to force the fight to the ground. Her attempts to ground de Randamie stonewalled, she elected instead to trade with a far more accomplished and able striker. Randamie was happy to oblige, as she added left hooks and the occasional head kick to her volleys of right hands.


Former two-division King of the Cage champion Bobby Green had too much firepower for the previously unbeaten Matt Ricehouse, as he cruised to a unanimous decision in an undercard matchup at 155 pounds. Green (19-5, 4-1 Strikeforce) swept the scorecards by identical 30-27 counts.

A 25-year-old Empire Training Center representative, Green floored Ricehouse (6-1, 4-1 Strikeforce) with a short right cross in the first round, battered him with a stream of knees and struck for takedowns in all three rounds. He has won four fights in a row.