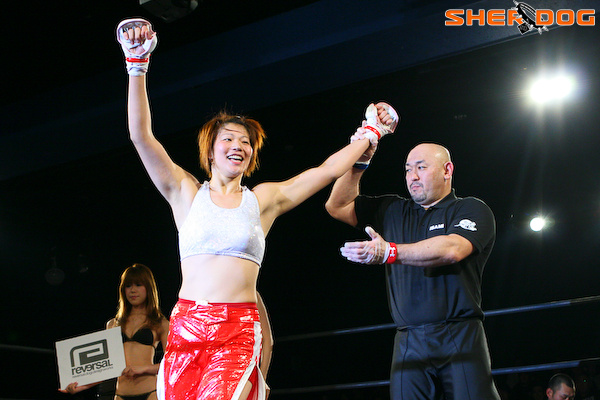 “Rousey vs. Kaufman” takes place Aug. 18 at the Valley View Casino Center in San Diego and will be headlined by a titular women's bantamweight collision between reigning champion Ronda Rousey and ex-titlist Sarah Kaufman. The main draw airs live on Showtime and is preceded by the preliminary card broadcast on Showtime Extreme.

Yamanaka, 33, has not competed since being knocked out just 16 seconds into her featherweight title bout with Cristiane Santos on Dec. 17. However, that result was later changed to a no-contest after Santos tested positive for anabolic steroid stanozolol. Known as “Cat's Eye,” Yamanaka had earned eight consecutive victories prior to her meeting with “Cyborg.”

De Randamie is regarded by many as one of the best strikers in all of women's MMA. The muay Thai practitioner is 2-2 as a mixed martial artist, most recently falling to Julia Budd in a contentious unanimous decision loss last June at Strikeforce Challengers 16. “The Iron Lady” earned the lone knockout of her nascent MMA career in her January 2011 Strikeforce debut, finishing Stephanie Walker with a first-round knee strike at “Diaz vs. Cyborg.”

Representing KDojo in Fairfield, N.J., Amagov suffered the first knockout loss of his pro career in his most recent in-cage appearance, falling to UFC veteran Robbie Lawler in just 1:48 at January's “Rockhold vs. Jardine.” The 27-year-old had been perfect in his Strikeforce career prior to that defeat, besting Ronald Stallings and Anthony Smith in his first-two outings in hexagonal cage.

Known as the “KO Kid,” Berry, 24, has lost four of his last five fights. The 24-year-old was defeated in both of his Strikeforce efforts last year, submitting to a Trevor Smith north-south choke before being outpointed by Gian Villante last August. Berry most recently fought in April at a local event in California, tapping to a rear-naked choke courtesy of Tyson Jeffries.