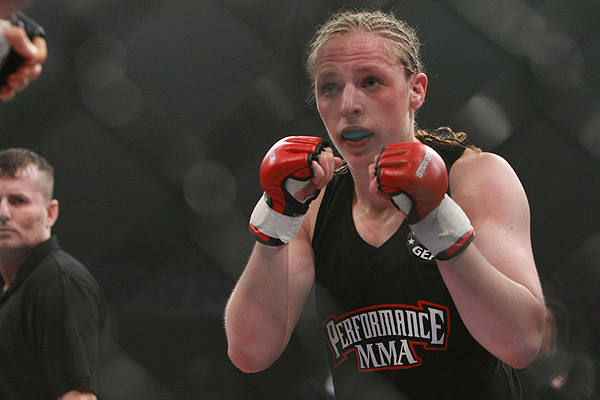 Sarah Kaufman has staked her claim as the top contender for the Strikeforce women’s bantamweight championship.

The former titleholder tagged, battered and bloodied Alexis Davis with a stream of straight punches en route to a majority decision at Strikeforce “Tate vs. Rousey” on Saturday at the Nationwide Arena in Columbus, Ohio. Two of the three cageside judges, Otto Torriero and Daryl Wise, scored it for Kaufman (15-1, 6-1 SF) by identical 29-28 counts; a third, Cardo Urso, ruled it a 29-29 draw.

Content to keep it standing, Kaufman went to work with her hands and staggered Davis with a searing left hook in the first round. From there, she unleashed rights and lefts down the pike, opening a nasty gash on her fellow Canadian’s left eye. More of the same followed in round two, though Davis kept her nose in the battle and attacked Kaufman’s legs with heavy kicks from the outside.

In the third round, Davis (11-5, 2-1 SF) made her move. The 27-year-old Dayboll Jiu-Jitsu representative scored with a trip takedown, passed to side mount and fished for an armbar. Kaufman defended successfully and exchanged reversals with her opponent, but Davis wound up on top, mixed in some ground-and-pound and closed the fight in a dominant position.


Roger Bowling trapped a game but overmatched Brandon Saling in a topside crucifix and stopped the Bellator Fighting Championships veteran on second-round punches in an action-packed welterweight showcase. Bowling (11-2, 4-2 SF) closed out his fellow Ohioan 75 seconds into round two.

Saling (6-5, 0-1 SF), however, did not go away quietly. The 26-year-old brawler wobbled Bowling with power punches twice inside the first five minutes. Bowling eventually turned to takedowns, established his superiority on the ground and ultimately grinded down Saling for the finish.

Fodor started strong, as he stuck Healy with a crisp left hook and consecutive right hands in the first round. However, Healy recovered, escaped from the bottom following a takedown and turned the tide in his favor with the rugged determination for which he has become known.

Taken down repeatedly, Fodor’s situation deteriorated as the fight deepened. Healy mounted him for a second time in the third period, avoided an attempted leg lock and secured the choke for the submission. The defeat halted a five-fight winning streak for Fodor (7-2, 5-1 SF).


In what was easily his most impressive performance to date, Ryan Couture stopped Conor Heun on third-round punches in a preliminary lightweight encounter. Mounted on Heun’s back, Couture (4-1, 4-1 SF) brought it to a close 2:52 into round three.

Heun (9-5, 1-3 SF) was outclassed on the feet and on the ground. Couture, the 32-year-old son of UFC hall of famer Randy Couture, damaged the 10th Planet Jiu-Jitsu representative with his hands in the first round, opening a serious gash under Heun’s left eye. Heun scored with takedowns, but Couture neutralized any advantage with relentless activity from the bottom.

Couture struck for a takedown of his own in the third round, moved to mount and eventually transitioned to Heun’s back, hooks in. He flattened out his foe from there and finished it with unanswered strikes to the head.