TOKYO -- Representatives of Greatest Common Multiple's women's MMA event Valkyrie edged out their Jewels counterparts with a 3-2 tally in Saturday's Jewels doubleheader at Shin-Kiba 1st Ring. Jewels' 13th Ring and 14th Ring events marked the promotion's official return to action since the cancellation of their Jewels 12th Ring event on March 11, which was preempted by the disastrous magnitude 9 earthquake and tsunami that devastated Japan's Tohoku region.

Tipping the scales in favor of the cagefighting femmes was a main event finish by Naho "Sugi Rock" Sugiyama over sturdy veteran and Jewels' rep Misaki Takimoto.

A staunch karateka, Takimoto pressured Sugiyama in the opening moments with a harassing jab and an occasional low kick, using superior footwork to bounce just out of range of her opponent's attempts at counter striking. However, it was when Takimoto botched a trip takedown soon after that things started to go downhill for her. 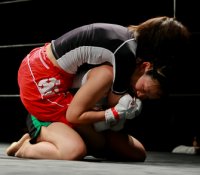 T. Irei
Sugiyama choked out Takimoto.
On top in guard, Sugiyama methodically passed to side, dropping punches to the face and body. In her attempts to squirm free, Takimoto soon gave up her back, whereupon the Valkyrie vet sunk the rear-naked choke. Takimoto punched over her shoulder in defense, but soon found her strikes turning into taps as the choke slipped under her jaw. The official time was 4:06.

Elsewhere, Jewels postergirl Mika Nagano dispatched Emi Murata in fairly short order. After eating a few punches from the tall, rangy Murata, Nagano clinched up to take the fight to the canvas. Once there, she expertly passed to side control and latched on the armbar. Murata's defense saw both of them almost tangled up in the ropes, but Nagano stayed latched on until she forced the tap at 1:40 of the first round. 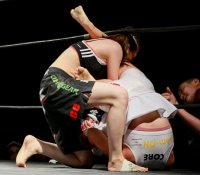 The Valkyrie vet's gameplan to take “Esui” out was apparently to dive into fire to secure takedowns. The plan seemed a sound one as she initially put the towering Mongolian down and took her back. However, this first takedown came with a steep price as Yonezawa ate a bevy of bruising punches and hammer fists on the way in, shutting her left eye with swelling.

With Yonezawa's eye completely shut, ringside doctors called the bout before the start of the second stanza, giving Erdenebileg the victory.

Sadae Suzumura dispatched Anna Saito with brutal efficiency, crushing the shorter, softer fighter with stiff punches on the feet and brutal body punches on the ground. Saito's harai goshi attempts were poorly executed and repeatedly gave Suzumura top position. This made it easier for Suzumura to lay into her with lunging knees to the body from above. Suzumura lived up to her namesake of “Manhoef” all the way up until her armbar finish at 2:10 of the second, which referee Kenichi Serizawa called without needing to see a tap.

Yukiko Seki took the fight to an overweight Yuka Okumura, who came into the bout with a yellow card for being 0.7 pounds over the contracted weight limit of 106 pounds. Undeterred, Seki was the aggressor, winging punches into the face of Okumura before hitting takedowns and following up with punches to the body. Judges Yoshinori Umeki and Akira Yamazaki ruled the bout for Seki, while contrarian judge Ryogaku Wada ruled it for Okumura.

The heavy punches of Asami Higa were little match for the persistence of Megumi Morioka, who despite eating her fair share of punishment, controlled her opponent with takedowns to notch another win for the Valkyrie side. On the ground, Morioka easily stole top position in side and full mount to threaten with punches and armbar attempts. Though unable to finish, the judges to unanimously ruled in Morioka's favor.

Miyoko Kusaka and Sachiko Yamamoto had a tight two-rounder in which “Sachi's” submission attempts tipped the scales in her favor to notch the decision and another win for team Valkyrie. It was just enough to convince judges Wada, Yamazaki and Umeki to award it to the Valkyrie veteran. 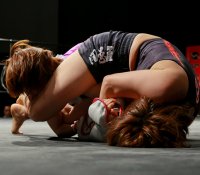 Jewels' only other victory over team Valkyrie also came in the form of a grappling bout as Rikako Yuasa narrowly outgrappled Kazue Satake to a decision.

Tsuji cited an extended layoff to take care of nagging injuries to her right knee and shoulder. Her last action was in February 2010, when shockingly she lost her Valkyrie title to Mei Yamaguchi by way of first round rear-naked choke.