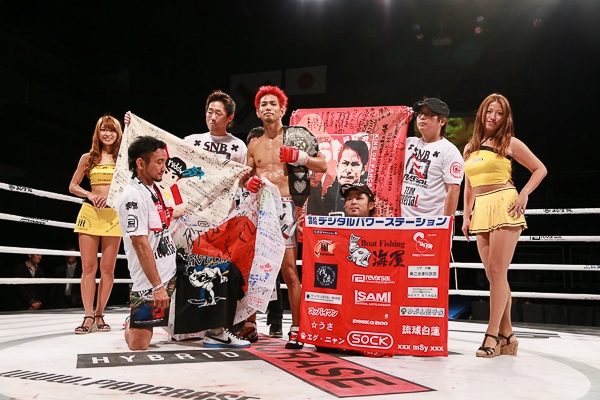 TOKYO -- Mitsuhisa Sunabe came out on top Saturday night in a battle of speed versus power, using quick punches and takedowns to thwart heavy-handed Masakazu Utsugi in the main event of Pancrase “Progress Tour 12.”

Sunabe, the reigning flyweight (120-pound) King of Pancrase, defended his title in a three-round unanimous decision at Tokyo’s Differ Ariake.

The opening frame was largely a feeling-out round which saw both men circle the ring and find their range with feints and sporadic kicks. The Okinawan Sunabe seemed to find his rhythm quicker, however, turning up the heat towards the end of the round and landing lightning-fast combinations.

In round two, the defending champ began to extend his lead by using quick combinations and superior head movement. The muscle-bound Utsugi charged forward with heavy hooks, but could sparsely land shots as Sunabe countered and moved. Utsugi’s best chance came toward the end of the round, after Sunabe shot in from range with a deep double-leg takedown. The challenger quickly wrapped an arm around Sunabe’s neck and squeezed tight for more than a minute, trying to finish with a guillotine choke. The lanky champion held on, however, keeping his hips high and pulling tight on Utsugi’s arms until the bell sounded.

Utsugi came on strong in the final round, throwing his power-punching game plan out the window and choosing to clinch and out-muscle Sunabe. Constant pressure and takedowns from Utsugi seemed to fluster Sunabe, but the challenger couldn’t keep him under control. After a referee stand-up for lack of action, Sunabe found his range again on the feet and re-enacted the first two rounds until the final bell. In the end, judges Yoshinori Umeki and Taku Aramaki scored the fight 30-28 for Sunabe, while judge Yoshifumi Oyabu submitted a narrow 30-29 scorecard.

Welterweight Sojiro Orui got one step closer to a shot at the title with an uneventful decision win over Akihiro Yamazaki. Orui spent most of the fight on top in mount, flattening his opponent but doing little else to win the fight. After three rounds of persistent pancaking, judges Oyabu and Aramaki scored the fight 30-28 for Orui, while judge Fukuda scored it 30-27.

Despite being on the receiving end of a brutal TKO his last time out, 16-year Pancrase mainstay Yuki Kondo earned a surprising first-round knockout over fellow welterweight Kosei Kubota. A lazy feint from Kubota gave the former King of Pancrase a perfect opportunity to lunge in and counter with a huge hook, sending Kubota straight to the canvas as referee Umeki jumped in to save him. The stoppage came only 52 seconds into the opening round. 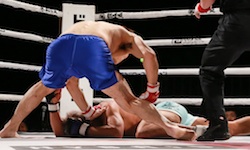 Taro Irei
Kondo caused Kubota to crumble quickly.
UFC veteran Edward Faaloloto looked to get a fresh start in Japan as he took on Paraestra Hachioji's Yoshiaki Takahashi in a lightweight bout, but things didn’t go the Hawaiian’s way. “Falo” took charge early, spending most of the first round latched onto Takahashi’s back and working for a choke. In the second frame, however, “Bancho” Takahashi turned the tide with a big right hook that staggered his opponent. The Japanese fighter capitalized on the moment with a huge hip toss before passing to mount. A cut opened over Faaloloto’s eye and he struggle to clear blood from his eyes while avoiding Takahashi’s choke attempts.

In the final round, Takahashi continued his aggressive grappling, landing takedowns and skillfully setting up various choke attempts. The blood around Faaloloto’s head and neck seemed to aid him in this round, allowing him to slip out of a tight Takahashi triangle choke. After the final bell, judges Oyabu and Fukuda scored the fight 29-28 while judge Aramaki scored it 30-28, all for Takahashi.

Dream bantamweight grand prix participant Atsushi Yamamoto made a return to the Pancrase ring after an extended absence, this time fighting at 125 pounds against Yasutaka Koga. Yamamoto used his trademark pitter-patter punching and manic footwork to keep Koga confused while setting up an array of quick takedowns from different angles. Despite his opponent’s persistent scrambling, Yamamoto managed to land continuous takedowns and secure a unanimous decision.

Light heavyweight Team Tackler product Shinsho Anzai stayed true to his team’s namesake as he steamrolled through South Korea’s Hyun Gwan Lee with an early takedown, followed by ground-and-pound offense. “Animal” put an exclamation mark on his performance with one final soccer kick to Lee’s nose, prompting referee Umeki to stop the fight at 4:52 of the first round. 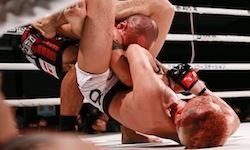 Taro Irei
Takahashi used his grappling to top
UFC vet Faaloloto.
At featherweight, Tadahiro Harada needed even less time to dispose of opponent Masakazu Takafuji. Both fighters started off aggressive and quickly found themselves on the mat, where Harada passed to side control and set up a perfect north-south choke which forced Takafuji to tap at 1:48 of round one.

Nakajima spent most of the fight chasing a dazed Takita around the ring, battering him with power punches and heavy kicks. Takita managed to survive until the final bell, though all three judges saw the fight for Nakajima with scorecards of 30-29, 30-28 and 30-27.

Former Shooto and Pancrase title challenger Hiroyuki Abe snapped a two-fight losing streak with a unanimous decision win over Takamasa Kiuchi at 120 pounds. Abe stalked Kiuchi around the ring and landed power shots throughout the 15-minute affair. Despite coming close at the end of all three rounds, Abe couldn't finish his opponent and took a victory in the form of three lopsided scorecards (30-26, 30-26 and 30-27).

At lightweight, Kota Okazawa and Hiroki Nagaoka fought to a unanimous draw after two rounds, while Gota Yamashita earned a split decision win over Shigeaki Kusayanagi at welterweight.

In women’s 105-pound action, Sadae Suzumura submitted 17-year-old Shino VanHoose with a powerful kneebar at the 2:18 mark of the second round.