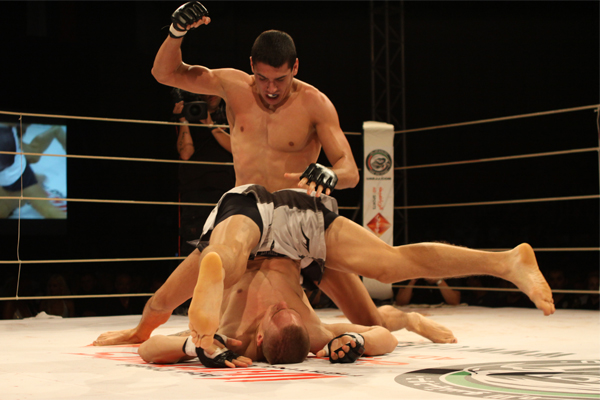 In the marquee matchup of the night, Bulgarian middleweight champion Svetoslav Savov put his title up for grabs against fellow European top prospect Bojan Velickovic. After three closely-contested rounds, it was Savov’s superior wrestling and top control that sealed the deal.

Velickovic, a physically gifted athlete with an excellent transition game and great submission defense, had good moments in every round, but was ultimately let down by poor decision making and takedown defense. “Veli” even came the closest to stopping the fight with a very deep guillotine choke at the beginning of the second round, but Savov ultimately swept and ground-and-pounded his way to a unanimous decision victory.

Meanwhile, in the night’s main event, Austria’s Nandor Guelmino also swept all three rounds against Bulgaria’s Emil Zahariev to capture WFC heavyweight gold. Unfortunately, the much-anticipated heavyweight battle could not keep up with the high quality standard the previous bouts had set. In a nutshell it was Guelmino who did just a little more damage with a “hit-and-run” game plan, using his left jab and right low kick to the kneecap in a way that would have done the Klitschko brothers and Jon Jones proud.

Zahariev, a national wrestling champion in Bulgaria as well as the FILA grappling European champion, suffered from arguably the worst battle plan ever as he completely abandoned his grappling skills to wait for occasional counters with his big overhand left. The natural light heavyweight left it until the dying seconds of the final round to score a big takedown and drop back for one of his feared leglocks, but it was too little, too late. By the time that happened, the usually very fair and knowledgeable Ljubljana audience had already shown their disdain for the snoozefest by leaving the arena in large numbers midway through the second round.

Everything but boring was a high-octane tilt for the vacant lightweight strap between Poland’s Piotr Hallmann and Montenegro’s Vaso Bakocevic. The 23-year-old “Psychopath” added fuel to the fire by shoving “Pletwal” at the weigh-ins, and that prompted the Jakubowski student to unleash a beating of epic proportions. The fight was a good reminder how much damage a well-rounded fighter can do using Pride rules.

By the time the first round ended, Bakocevic stumbled back to his corner bloody and confused with a fractured nose and a nasty gash on his eyebrow. The 25-year-old Polish navy officer had used knees to the head on several occasions to turn the Montenegrin’s face into a crimson mask. Midway through the second round, the ring doctor had seen enough and rescued Bakocevic from permanent damage.

The awkward stance of defending welterweight champion Ivica Truscek proved to be the source of much frustration for previously undefeated Ukrainian Sergei Churilov. Croatia’s Truscek, who is currently bouncing back and forth between lightweight, which is better suited for his frame, and welterweight, where he holds the WFC title, started out jabbing and later incorporated kicks into his offensive arsenal.

Well-rounded Ukrainian Churilov did not really have an answer for that for much of the first round but came to life in the second stanza, as he scored with several thudding leg kicks and proceeded to outwrestle and outgrapple the champion. That did not really matter, however, as Truscek hit a switch off a failed guillotine attempt and then just fired away until veteran United Kingdom referee Grant Waterman had to step in and halt the bout.

In one of the two lnon-title mixed martial arts fights on the card, WFC mascot-turned-serious-contender Bor Bratovz armbarred Austria’s Markus Di Gallo in the third and final round of another brutal affair. In the first ten minutes, the big Slovenian middleweight scored with some heavy ground-and-pound and attempted kimura and leglock submissions. He also caught a big boot to the face that caused his right eye to swell completely shut.

The opening bout of the night saw good back-and-forth action between talented Serbian lightweight Milan Zerjal and Vienna-based Chechen Arbi Mezdihov in what was later declared the “Fight of the Night.” Zerjal dominated with a wrestling-based attack, while Medzihov had the upper hand in the striking department, especially in the later rounds. Just when everybody expected the fight to go to the judges, the 22-year-old Serb managed to take the back of his opponent and force the tap from the rear-naked choke.