The world’s greatest middleweight -- and perhaps its greatest fighter at any weight -- penned another chapter in his growing legacy, as he laid waste to Yushin Okami in less than two full rounds.

Anderson Silva -- who has won 15 consecutive fights, a staggering 14 of them inside the fenced walls of the Ultimate Fighting Championship’s hallowed Octagon -- leveled the Japanese standout with a short right hook and finished him with brutal ground-and-pound in the UFC 134 headliner on Saturday at the HSBC Arena in Rio de Janeiro, Brazil.

Referee Herb Dean stepped in to save Okami from further damage 2:04 into round two, as Silva (31-4, 14-0 UFC) defended his middleweight crown for the ninth time and avenged his 2006 disqualification to the judoka.

From the start, it was clear Okami (26-6, 10-3 UFC) was out of his element. Silva welcomed him into the clinch against the cage and ripped into his ribs with knees; somewhere, Rich Franklin cringed. Late in round one, Silva whipped a kick into Okami’s head and backed him into the cage as the horn sounded. The end seemed near.

In round two, Silva showed no regard for Okami’s punching power, lowered his hands below his waist and dared him to strike. Standing flat-footed, the Brazilian dropped Okami to the seat of his pants with a short, right jab. Okami returned to his feet but only briefly. Met with a wicked right hook, he went down again, this time in a fetal position. Silva followed him, battering him with a knee and elbow to the body. Punches came next, and Dean moved in on Okami’s behalf.

In the co-main event, Mauricio “Shogun” Rua avenged his 2007 submission defeat to fellow former UFC light heavyweight champion Forrest Griffin, and he did so in savage fashion.

Griffin (18-7, 9-5 UFC) dared to exchange with the 2005 Pride Fighting Championships middleweight grand prix winner and paid the steepest of prices. Shogun clipped Griffin with a combination in the center of the Octagon, put him on all fours and launched a stinging assault, first with punches, then with hammerfists. The match nearing its end, Rua (20-5, 4-3 UFC) bounced Griffin’s head off the canvas like a basketball, his superiority over “The Ultimate Fighter” Season 1 winner clearly established.

“Forrest is a good fighter,” Rua said. “I respect him, but I trained hard for three months for this day.” 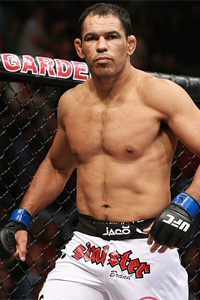 Former Pride Fighting Championships heavyweight titleholder Antonio Rodrigo Nogueira sent the partisan Brazilian crowd into an emotional frenzy, as he wiped out “The Ultimate Fighter” Season 10 finalist Brendan Schaub on a series of heavy first-round punches. The dramatic finish, in Nogueira’s first appearance in more than a year, came 3:09 into round one.

Schaub (8-2, 4-2 UFC) fought out of clinches and kept the Brazilian icon at a distance, but Nogueira landed liberally throughout the brief encounter. Midway through the period, “Minotauro” blasted Schaub with a two-punch combination and dropped him face-first to the canvas with a short, straight left hand. One last left on the prone Coloradan put the exclamation point on it.

Prior to the bout, much of the MMA world wondered if Nogueira’s career had reached its end, as he had undergone serious hip and knee surgeries during his 18 months away from the cage. As he left the arena, there were no such doubts about his ability to still compete at a high level. Nogueira can point to Schaub as evidence.

The damage on the face of Ross Pearson -- a hematoma above the left eye, a cut near the right -- told the story. The speed and accuracy behind the strikes of Edson Barboza were too much for him to overcome.

The undefeated Barboza (9-0, 3-0 UFC) won a split verdict from “The Ultimate Fighter” Season 9 winner in a featured lightweight match, as he worked his hands and feet together in beautiful concert. All three judges scored it 29-28, two of them for Barboza, who remains unbeaten in nine professional appearances.

To his credit, the rugged Pearson (12-5, 4-2 UFC) disrupted the Brazilian dynamo’s rhythm through much of the first round, and though he sustained his aggression, success proved elusive. A former Ring of Combat champion, Barboza floored Pearson with a sizzling second-round combination, as he followed a brutal kick to the body with a clean right hook to the head. Pearson recovered, but the tide had taken a subtle turn against him.

Barboza slowed Pearson’s forward motion in the second and third rounds, leaned on his stout chin, worked his angles and won the favor of two of the three cageside judges.

Bulgarian import Stanislav Nedkov walked through heavy fire to keep his unbeaten record intact, as he stopped Luiz Cane on first-round punches in a light heavyweight showcase. A right hand-left hook combination followed by a series of punches on the ground polished off the Brazilian 4:12 into round one.

Cane (11-4, 1 NC, 4-4 UFC) had Nedkov measured at the start, as he shrugged off attempted clinches from the Brazilian jiu-jitsu black belt and bloodied his nose with left hook-anchored combinations. Still, Nedkov never quit firing his right hand, and, with roughly a minute remaining, he cracked Cane with one of them and wobbled him with a left hook to the temple. Cane danced away awkwardly and retreated to the cage, his back turned. There was no escape. Nedkov (12-0, 1-0 UFC) floored him near the fence and finished it there. With that, his UFC debut was a smashing success.