WORCESTER, Mass. -- Tim Sylvia crashed Mariusz Pudzianowski’s party on Friday, forcing the Polish strongman to tap to strikes in the second round atop a surprisingly eventful “Moosin: God of Martial Arts” pay-per-view.

Central Massachusetts took on the atmosphere of Warsaw as the charismatic Pudzianowski, five-time World’s Strongest Man, attracted throngs of screaming Poles to the DCU Center in Worcester. To dueling chants of “Pudzia!” and “USA!,” the barrel-chested, 273-pound Pudzianowski took down the former UFC heavyweight champion in the opening moments of the super heavyweight fight. In doing so, Pudzianowski almost blew the roof off the place, but he suffered a cut to the top of his head in the fracas.

Sylvia, who weighed in at 305 pounds for the fight, began connecting with punches and knees down the stretch. He came out strong in the second round, putting knees on a gassed Pudzianowski. The bout then hit the mat, where Sylvia worked minor strikes from side control that caused Pudzianowski to tap and leave supporters deflated.

Pudzianowski, who suffered his first pro MMA loss after two successful outings, exited the cage without granting a post-fight interview.

“I’m back,” Sylvia declared after the fight. “Once he failed on the takedowns, I knew I had him.”

The event was broadcast live at 2 a.m. in Poland on the Polstat network, on which Pudzianowski has drawn as many as 6 million viewers. Press row was full of Polish language media, and pockets of flag-bearing and face-painted Polish fans attended and overtook the arena with cheers for their native fighters. An estimated 6,000 fans were on hand.

The event aired on pay-per-view in the U.S. and Canada, the first MMA pay-per-view to emanate from Massachusetts. Corey Fischer, a former Toughman promoter who put on the show with Eric “Butterbean” Esch, said that with television clearances across Europe and South Korea, he expects as many as 9 million people could see the fight. The promotion is financed by a wealthy South Korean tae kwon do enthusiast named Mr. Oh.

Campbell landed hard punches and found success with body kicks standing. He managed to slip out of vulnerable positions on the floor as Edwards worked toward chokes from back mount. Campbell said facing someone of Edwards’ stature put him in a particular mental state. 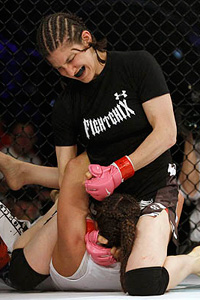 Modafferi outstruck LaRosa and fended off the takedown well in the first two rounds, including a superman punch that dropped the former BodogFight champion. LaRosa came on stronger in the third, but was nearly caught in a triangle choke. With the win, Modafferi avenged a 2006 decision loss to LaRosa.

In a battle of jiu-jitsu stylists, 2008 Pan American champion and Renzo Gracie product Rafael Natal used a straight left and hammerfists to stop UFC veteran and jiu-jitsu black belt Travis Lutter 4:12 into the first round. The middleweight prospect improved to 12-2 with the win.

The pay-per-view broadcast began with a fight between UFC veteran Forrest Petz against 4-0 local product Ralph Johnson. Petz had a difficult time with the lanky fighter’s reach and took a nip-tuck unanimous decision.

“It was an ugly fight,” Petz said. “I barley squeaked by in this one.”