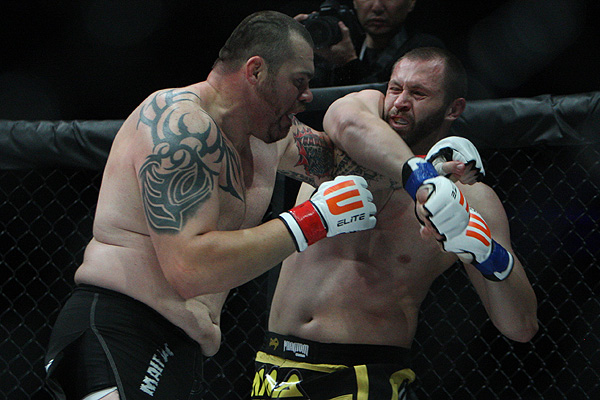 
In mixed martial arts, effective is not always synonymous with exciting.

Tim Sylvia was plenty of the former in the main event of ProElite “Big Guns” at the iWireless Center in Moline, Ill., on Saturday, grinding out a unanimous decision -- 30-27, 30-27 and 30-27 -- over Andreas Kraniotakes in a heavyweight tilt.

Each round had featured a repetitive theme, with Kraniotakes (12-5) favoring a straightforward attack that allowed Sylvia (30-7) to clinch and shove the German up against the fence. From there, the former UFC heavyweight king was able to use his superior size to wear down Kraniotakes, while peppering his foe with short punches and knees. The action slowed several times to the point where referee Todd Frederickson was forced to separate the combatants, but in most instances Sylvia would revert to the same plan of attack.

“The guy is tough; he brought it to me the whole time. I couldn’t put him away. He was a lot tougher than I thought he was. I knew I had him hurt a couple of times, but I just couldn’t finish on him,” Sylvia said.

Kraniotakes took the fight on short notice when originally scheduled opponent Pedro Rizzo unexpectedly withdrew less than three weeks before the contest. The 29-year-old, known as “Big Daddy,” had won five of his last six bouts coming in but was unable to mount significant offense for much of the night. Perhaps his best moment came when he connected with a spinning back elbow behind Sylvia’s ear before unloading on “The Maine-iac” with a brief flurry. Exchanges such as that one were few and far between, as those in attendance alternated between jeers and listlessness as time waned.

Sylvia, who owns 19 wins by knockout or technical knockout in his career, apologized to the fans after the decision was announced.

“Sorry I didn’t win with a knockout. That’s what I like to do,” he said.

The win was Sylvia’s sixth in his last seven outings. 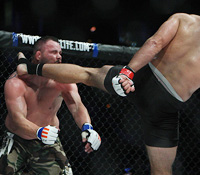 For most of Andrei Arlovski’s co-main event bout with the well-traveled Travis Fulton, it looked as though the former UFC heavyweight champion was satisfied to go home with a safe but not particularly enthralling unanimous decision.

As time ran out in the third round of the slow-moving bout, “The Pit Bull” flashed a glimpse of what once made him one of the most feared heavyweights in the UFC. At the 4:59 mark of the final frame, Arlovski unleashed a left kick to Fulton’s head that knocked the Cedar Rapids, Iowa, native out cold.

It was the saving grace of a fight in which both fighters were hesitant to pull the trigger for much of the contest.

For the majority of the bout’s first two minutes, Fulton stayed on the outside while the Jackson’s Mixed Martial Arts-trained Arlovkski connected with sporadic leg kicks and jabs. The Belarusian was able to stuff a couple of Fulton takedowns in the final stanza and dictate the action from side control. Arlovski allowed Fulton to his feet for the bout’s final 45 seconds to set up the explosive head-kick finish. 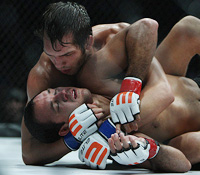 D. Mandel
Penn was no match for Cutts.
Cutts Powers Past Fatigued Penn

Reagan Penn’s professional MMA debut -- a rear-naked choke submission victory over Paul Gardiner at ProElite “Arlovski vs. Lopez” in 70 seconds -- was an exercise in efficiency. The sophomore effort of B.J. Penn’s younger brother did not go quite so smoothly, as Evan Cutts (3-0) outworked the exhausted Hawaiian over three rounds in a unanimous decision triumph.

The judges scored the bout 30-26 and 30-27 (twice) in favor of Cutts, who gradually asserted his will over the course of 15 minutes.

The opening round featured plenty of back-and-forth action on the ground, with both fighters securing several takedowns. Penn’s most impressive offense on the feet came when he staggered Cutts with a left hook and followed up with two more hooks and a right uppercut

Penn (1-1) was running on fumes in the second and third stanzas, however, dropping his hands and allowing Cutts take him down without much resistance. The Texan threatened with several chokes during this time, all while punishing Penn with a series of right hands. Despite Penn’s obvious fatigue, Cutts could not quite finish the fight. 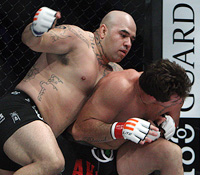 A former NCAA national champion wrestler at heavyweight, it was no secret what Mark Ellis’ game plan was heading into his fight with Ryan Martinez.

Someone forgot to alert Martinez, who agreed to face the American Kickboxing Academy member on just three weeks’ notice. Over three slow-paced rounds, Martinez stuffed seven takedowns from Ellis and punished the 25-year-old on the feet, taking a clear-cut unanimous decision to advance to the final four of the heavyweight grand prix. All three judges had the bout 30-27 in favor of the Greeley, Colo., native, who will meet Cody Griffin in the semifinals.

Ellis (1-1) spent most of each round circling his opponent while, Martinez (6-1) seemed content to control the center of the cage and land punches when his foe got within range. As the bout waned, Ellis’ shots became more desperate, but Martinez was never truly threatened. 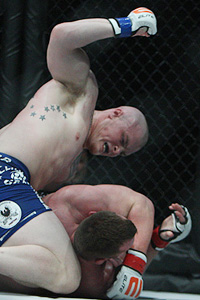 Jake Heun connected with a left hook-right hook combination to hurt Ed Carpenter, and then finished the Midwest Training Center product with a flurry of hammerfists on the ground to end their heavyweight grand prix tussle at the 3:17 mark of the opening round.

With the win, the Jeremy Horn pupil advances to the semifinals of the ProElite tournament; Heun will face Richard Odoms. The loss ends a three-fight winning streak for the 24-year-old Carpenter (5-2).

Carpenter began well, pushing Heun (2-1) into the fence and eventually securing a double-leg takedown. A kimura attempt by Heun allowed him to escape the position and get back to his feet, where he was able to land his devastating combo and get the finish.

Seemingly down and out after two rounds, 24-year-old Cody Griffin staged a shocking comeback to score a technical knockout of Justyn Riley in their heavyweight grand prix bout. 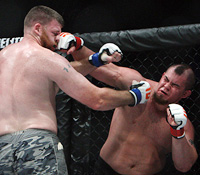 D. Mandel
Griffin rallied on Riley.
Griffin (5-2) hurt Riley (4-3) with a pair of short right uppercuts near the cage and then finished the job with a flurry of strikes on the ground. Referee Jay Estrada called a halt to the action 32 seconds into the final frame, and Griffin moved into the seminal of the heavyweight bracket.

The first two rounds belonged to Riley, as the Team Capital Punishment representative controlled the action with knees in the clinch and punches and knees when Griffin turtled up on the ground.

San Antonio resident Richard Odoms became the first man to advance to the semifinal round of the ProElite heavyweight grand prix, methodically controlling Rod Housley en route to a unanimous decision victory. All three judges scored the bout 30-27 in favor of Odoms (6-0). 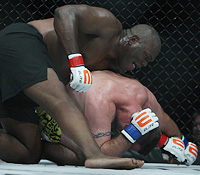 D. Mandel
Odoms cruised against Housley.
In the opening round, Odoms fought at close range and punished Housley (3-3) with body shots. The Texas police officer stuffed Housley’s takedowns in round two and landed punches inside his opponents’ guard. In the third frame, Odoms continued to control the action, smashing Housley with punches and hammerfists as the Loveland, Ohio, native attempted to protect himself on all fours. The 43-year-old Housley was too fatigued to launch a significant assault in the final minutes of the round.

On the untelevised undercard, Waylon Lowe stopped Floyd Hodges after Hodges was unable to continue due to a jaw injury at 5:00 of the second round and Todd Monaghan submitted Richard McCraw with a rear-
naked choke in just 29 seconds.