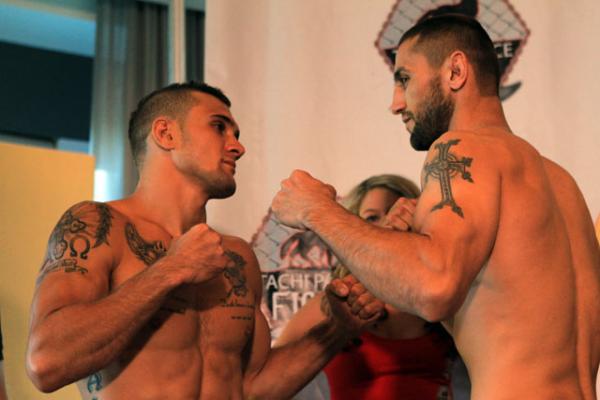 
A lightweight title bout between Christos Giagos and Sevak Magakian will move forward as expected, as both main event competitors were cleared at Wednesday’s Tachi Palace Fights 19 weigh-ins.

Giagos tipped the scales at 155 pounds, while Magakian checked in at 154.2. TPF 19 “Throwback Thursday” takes place Thursday night at the Tachi Palace Hotel and Casino in Leemore, Calif. The event streams live and free on Sherdog.com.

A member of the Elite Training Center, Giagos has won eight of 10 professional appearances, with six victories coming inside the distance. The more experienced Magakian, meanwhile, has 19 pro bouts to his credit; nine of the Hayastan Studio product’s 13 triumphs have come via submission.

Co-headliners Olaf Alonso (150.6) and Adrian Diaz (149.8) were also cleared for their lightweight clash. An 11-time WEC veteran, Alonso hasn’t competed since losing via doctor stoppage against Kyle Pimental in May 2009. Diaz has five wins in 9 fights, most recently falling to current UFC talent Andre Fili via third-round TKO more than one year ago.

Also of note on Thursday’s card is two-time Octagon veteran Eddie Yagin (145.4), who hasn’t stepped into the cage since upsetting Mark Hominick at UFC 145. “The Filipino Phenom” will lock horns with Diego Saraiva (145.4) in a rematch of a 2009 contest which Saraiva won via doctor stoppage in round three.

*Rodriguez and Santistevan were not present at Wednesday’s weigh-ins. They will weigh-in on Thursday prior to the event.