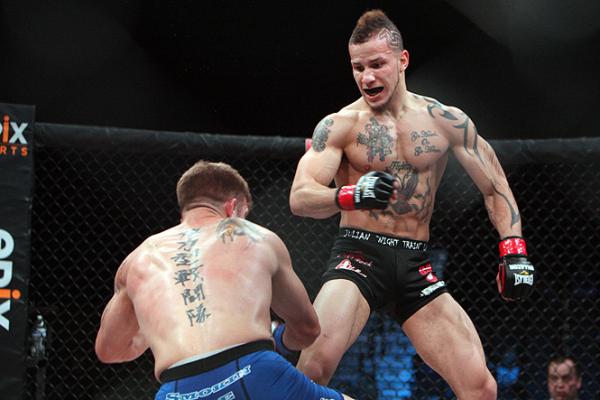 
While it wasn’t exactly a vintage “Let me bang, bro” performance, Julian Lane had enough thunder in his right hand to help him capture championship gold on Friday night.

After more than 14 minutes of tepid action, “The Ultimate Fighter 16” alum floored Luis Felix with an overhand right before putting his foe to sleep with a guillotine choke in the Classic MMA Entertainment and Sports 25 headliner at the Twin River Casino, in Lincoln, R.I. The end came 4:56 into the third frame, giving Lane the promotion’s vacant 155-pound title.

Most of the bout served as an extended feeling-out process for both men. Felix connected with the occasional kick, while Lane (8-3-1) mostly came up short on his punches. Before the final sequence, the most interesting moment came when the combatants traded guillotine attempts in the second stanza.

Finally, Lane did his damage with the third round waning. He lured Felix (11-8) into position by faking a jab before toppling him with his right hand. After briefly swarming on his fallen foe with punches, Lane switched to a guillotine attempt and choked the fighter nicknamed “Rockstar” unconscious.

According to Lane, the initially cautious approach was all part of the plan.

“That was my whole game plan. I was gonna let it go through the third round. Coast it for the first and second, feel him out,” said Lane, who gained a measure of notoriety for wreaking havoc during his stint in the “TUF 16” house. “I didn’t really know much about my opponent, so I wanted to take it slow and set up that big right hand. That’s what I did.”

In the co-main event, powerful Brazilian Gil de Freitas (17-5) spent the better part of two rounds stalking George Sheppard. When he finally tracked his man down, the results were devastating.

De Freitas dropped his opponent with a big right hand late in round two, bringing an end to the lightweight clash at the 4:52 mark of the period. Referee Dan Miragliotta intervened almost as soon as Sheppard (15-9) hit the canvas.

While the Rio de Janeiro native walked his adversary down from the opening bell, Sheppard had his share of success landing straight punches and circling out of danger. Sheppard’s consistent offense succeeded in opening a cut under De Freitas’ left eye, but eventually the Brazilian’s brutal leg kicks made for a less mobile target.

As Sheppard slowed, De Freitas was able to trap him against the cage and load up on power shots, finally lining up the decisive blow just before time expired in round two.

First-round finishes continue to be the norm for Charles Rosa. The American Top Team prospect improved to 9-0 by tapping out Jake Constant with an armbar 3:36 into the first frame of their catch-weight clash. Eight of Rosa’s nine career triumphs have come inside of a round.

Constant (5-6) put the pressure on early, landing a spinning-back kick at the outset and then throwing power punches with reckless abandon. Rosa was able to maintain his composure, however, and the 27-year-old responded with a steady diet of kicks to the legs and body.

Constant had one more salvo left, as backed Rosa up with a stout left hand. Once the fight hit the ground, however, it was all Rosa. After initially threatening with a Peruvian necktie, Rosa worked his way into position for an armbar. Constant’s efforts to escape proved futile, as Rosa gradually secured the maneuver to earn the submission.