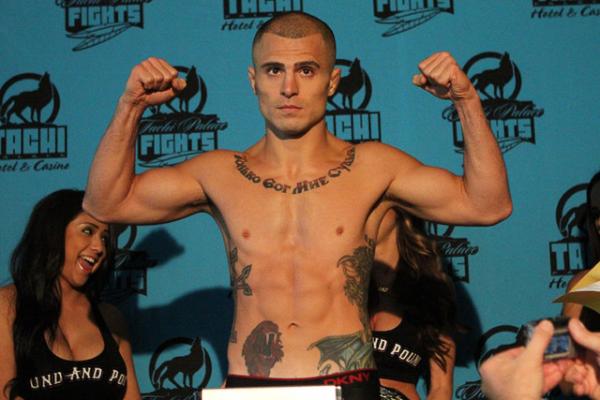 Coming off the first defense of his Tachi Palace Fights featherweight title, Georgi Karakhanyan would like to make a move to the UFC.

The 27-year-old Millennia MMA product has won five straight. On Sept. 7, he retained his TPF belt by outpointing WEC veteran Micah Miller over five rounds for a unanimous decision.

“I was not happy with the way I performed, but I was happy I got the ‘W,’” Karakhanyan told the Sherdog Radio Network’s “Beatdown” show.

The fight stalled at times in the clinch. Karakhanyan was surprised that Miller closed the distance on him.

“I personally thought he was going to keep it standing more, keep away from me with his reach, but my game plan was to chop his legs, to hurt his legs,” Karakhanyan said. “I didn’t know he was just going to do a lot of clinching game with me, which was awkward. Towards the third, fourth, fifth, I had to adjust and start taking him down.”

Karakhanyan’s cornermen, Romie Aram and Betiss Mansouri, warned him that if he stayed in the clinch, he was going to lose the fight. They told him to put Miller on his back, and he did.

“This [was] the time to do it because he was getting sweaty and I was sweaty, and it would be hard to catch him in a submission,” Karakhanyan said. “I started putting his back against the cage more often, not letting my back touch the cage, and then towards the third, fourth, fifth, we started taking him down.”

Karakhanyan racked up points with takedowns and strikes on the ground, eventually prevailing on scores of 50-45, 50-45 and 48-47. He said he has one fight remaining on his contract with TPF, and he wouldn’t mind taking on a UFC veteran.

“I would like to fight guys with big names,” Karakhanyan said. “Micah had a good name. I want to fight guys that have been up there. ... Anyone that has a good name, maybe fought in the UFC a few times, WEC or something like that, or maybe a Dream featherweight champion or Sengoku. Anyone.”

As for life after TPF, there has been some talk that the World Series of Fighting could be interested in Karakhanyan, but he dismissed the rumor for now.

“Nothing with the World Series,” he said. “Nothing with them or any other organization. No one’s so far reached out to me or my manager. I just hope I get a call from [UFC featherweight matchmaker] Sean Shelby.”

Karakhanyan explained that if he signs with any organization other than the UFC, he’d be looking for a one-fight deal. And if he does move on to the UFC soon, he already has an opponent in mind.

“The name would probably be Hatsu Hioki,” Karakhanyan said. “I would like to fight him a lot. There are a few other guys that are beatable, but the main guy probably would be Hatsu Hioki.”