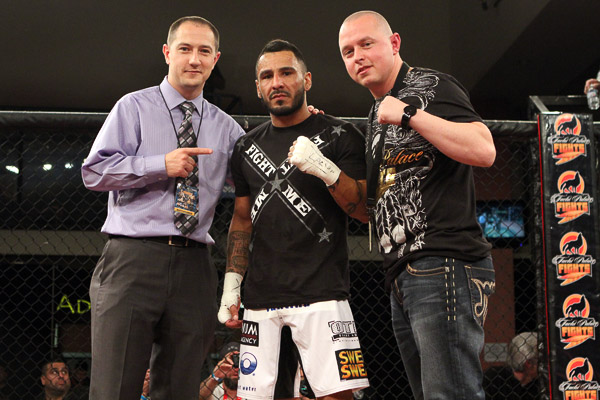 Bantamweight gold will be on the line at Tachi Palace Fights 13, as local favorite Casey Olson will meet former UFC talent Francisco Rivera for the company’s vacant 135-pound title in the May 10 headliner.

Tachi Palace Entertainment Coordinator Jeremy Luchau informed Sherdog.com of the news on Wednesday, revealing that reigning TPF bantamweight king Ulysses Gomez has vacated his title in order to return to the 125-pound ranks.

“As the fights unfolded at TPF 12, it was apparent that there was no better fight for the now-vacated 135-pound title,” Luchau told Sherdog. “‘Cisco’ put on another brilliant performance, and Casey looked very strong at the new weight class.”

A former lightweight and featherweight competitor, Olson recently made the cut to 135 pounds and found success, outpointing Cody Gibson in the TPF 12 main event on March 9. The victory marked the seventh win for Olson in his last eight outings, as the former WEC and Strikeforce talent returned from nearly a two-year layoff to best Gibson in his bantamweight debut.

Rivera (Pictured, center) has posted a pair of victories since his ill-fated two-fight stint under the Zuffa umbrella. Following back-to-back losses to Erik Koch at WEC 52 and Reuben Duran at “The Ultimate Fighter” Season 13 finale, Rivera closed out 2011 with a 40-second knockout of rising talent Brad McDonald. The Californian maintained his momentum to kick off 2012, earning a 75-second knockout over Antonio Duarte.