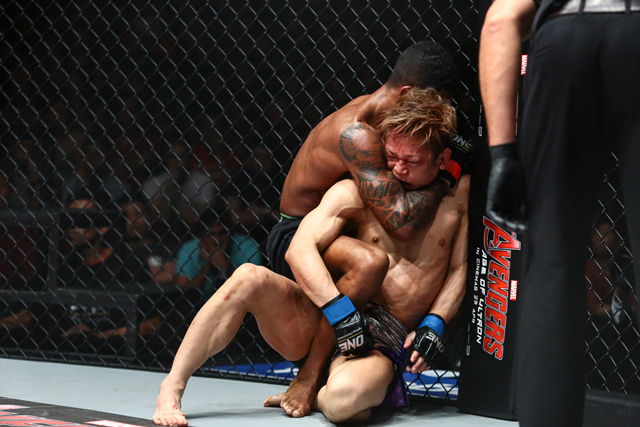 Check out the full photo gallery below. | Photo Courtesy: One Championship

The once-beaten Moraes retained his flyweight crown with a unanimous decision over Rings veteran Asuka Mikami in the One Championship 25 main event on Friday at Stadium Putra in Kuala Lumpur, Malaysia. The 25-year-old Constrictor Team standout has posted four straight wins since suffering his only pro defeat in November 2013.

Repeated takedowns carried the Brazilian champion. Moraes (13-1) struck for multiple takedowns in the first, third and fourth round, moving routinely to his challenger’s back. Mikami (11-3-1) dodged his bids for submission but remained on the defensive for much of the 25-minute fight. Moraes opened a cut on the Japanese flyweight’s left eyebrow in round for and then sealed his latest victory with another takedown in the fifth.


In the lightweight co-headliner, Peter Davis wiped out Super Fight League alum Rajinder Singh Meena with first-round elbows from the mount. Meena (8-2) met his end 2:41 into round one.

Davis (10-3) sprawled out of a takedown, transitioned to the back and let loose with his ground-and-pound. Meena flipped over, surrendered full mount and continued eating punches. Davis then inched higher with his mount and forced the stoppage with a burst of elbows from the top, cruising to his fourth win in as many appearances.

Meanwhile, Ann Osman submitted Egyptian Top Team’s Walaa Abas Mohamed Kamaly with a first-round rear-naked choke in a featured women’s flyweight affair. Osman (3-1) brought it to a close 2:23 into round one, as she recorded her third consecutive victory.

Kamaly (2-3) enjoyed some initial success with her hands but her aggression allowed the Malaysian to close the distance. Osman pushed the Egyptian to the fence, changed levels and scored with the takedown. She then moved to the back, set her hooks and shut down a desperate Kamaly scramble, cinching the choke in the process. Kamaly went belly down, the tapout following soon after.

Ting (9-2) utilized steady forward pressure, a series of clinches and a few head kicks to offset effective punches from his Filipino counterpart throughout the first round. Less than a minute into round two, Ting executed the fight-ending guillotine. The 25-year-old Malaysian has rattled off three straight wins, all of them finishes.

In other action, Gianni Subba (5-1) knocked out Thanh Vu (5-4) with a soccer kick and follow-up punches 20 seconds into their battle at 125 pounds; Evolve MMA rep Kirstie Gannaway (2-0) submitted April Osenio (0-1) with a rear-naked choke 2:50 into round two of their women’s atomweight scrap; Cambodia’s Chan Rothana (3-1) put away Ramon Gonzales (1-1) with punches and elbows 4:48 into the first round of their bantamweight clash; and 19-year-old Agilan Thani (2-0) dispatched Reant Fabriza Rainir with punches 80 seconds into round one of their encounter at 170 pounds.