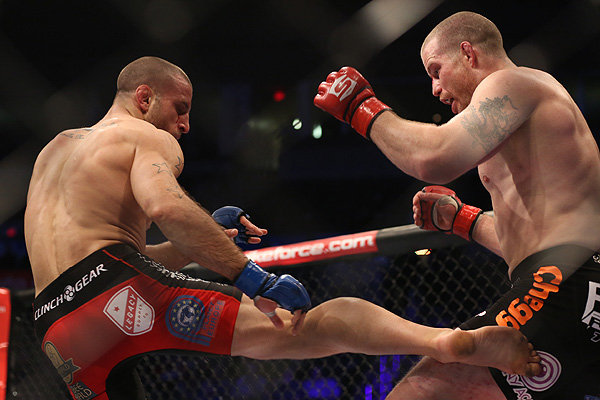 
Tarec Saffiedine converted his right leg into a meat tenderizer, and Nate Marquardt provided him with the meat.

A ruthless volley of unchecked leg kicks carried Saffiedine to a unanimous verdict over Marquardt (32-11-2, 1-1 Strikeforce), as he captured the welterweight championship in the Strikeforce “Marquardt vs. Saffiedine” headliner on Saturday at the Chesapeake Energy Arena in Oklahoma City. All three cageside judges awarded their decision to Saffiedine (14-3, 6-1 Strikeforce): 48-47, 49-46 and 49-46.

Saffiedine established his foothold early, when he sat down Marquardt with a short, straight right hand while backpedaling. The champion did his best work in round two, where he struck for a trip takedown and pressed the Belgian in the clinch. From there, however, it was all Saffiedine.

The 26-year-old Team Quest representative targeted Marquardt’s lead leg with power and precision. At the end of four rounds, the Coloradan’s appendage was a mangled mess, and he had difficulty walking back to his corner. His short title reign was effectively over. Saffiedine put the exclamation point on victory in the final minute of the fight, as he took down Marquardt and tagged him with some ground-and-pound.

“I’ve been training so hard for so long,” Saffiedine said. “My kicks are one of my best weapons, and I trained them a lot in training, so that was kind of my game plan. It’s unbelievable. I can’t [believe] I’m wearing the belt right now. It’s unreal.” 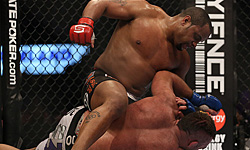 
In the co-main event, the undefeated Daniel Cormier put away Dutch import Dion Staring with a savage accumulation of second-round punches, elbows and hammerfists. Cormier (11-0, 8-0 Strikeforce) finished it 4:02 into round two.

Staring (28-8, 0-1 Strikeforce) had no chance. Cormier, a two-time Olympian, struck for multiple takedowns and battered the 34-year-old Dutchman with strikes from top position.

In the second round, Cormier grounded Staring, moved to mount and fired away until referee “Big” John McCarthy called a stop to the mismatch.

“I did exactly what I wanted to do. I wanted to wrestle him, stand with him a little bit [and] then control him with the ground fighting,” Cormier said. “He’s a very tough guy, and he stepped up when most guys didn’t, when my original opponent went out with an injury.”

Afterward, the 33-year-old American Kickboxing Academy representative took aim at former UFC heavyweight champion Frank Mir and challenged him to a April 20 date inside the Octagon. 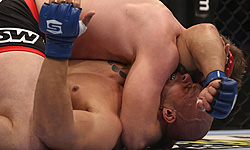 D. Mandel
Barnett (top) won quickly in round one.

Barnett, who had reportedly battled the flu in the weeks leading into the bout, scored with a takedown and moved immediately to mount. Soon after, the choke was in place, and the 37-year-old Guelmino was a beaten man.

Barnett, 35, has rattled off nine wins in his past 10 appearances.

“The plague lords tried to take me out, throwing viruses through my whole camp,” he said. “I haven’t had maybe more than two good days of training this whole camp. It just goes to show that if you’re an ass-kicker, if you’re a real mean machine, then you get your mind right and take people out. You don’t sit around bitching and complaining and throwing your excuses around. You get in there and die like a man, or you leave your opponent dead and stand victorious.” 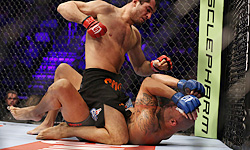 Mousasi (33-3-2, 4-1-1 Strikeforce) struck for a takedown 3:04 into the match, softened him with punches and elbows from top position and moved to mount. From there, the Holland-based 27-year-old unleashed his hands and forced Kyle to surrender his back.

The choke followed soon after.

“I got more professional, I think. I got out of my comfort zone and stepped up the training. I have to thank all my coaches and friends for helping me,” Mousasi said. “He’s a strong guy. He’s a heavyweight, and I didn’t need to cut a lot of weight for this fight, maybe five pounds. He’s a strong guy, and I wish him the best.” 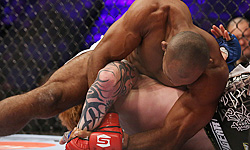 Souza (17-3, 7-1 Strikeforce) established his superiority on the feet, blasting the UFC veteran with heavy punches and a smooth front kick to the face.

A double-leg takedown into side control followed, and the Brazilian immediately isolated Herman’s right arm, locking up the kimura for the finish. “Jacare” has won seven out of his past eight bouts.