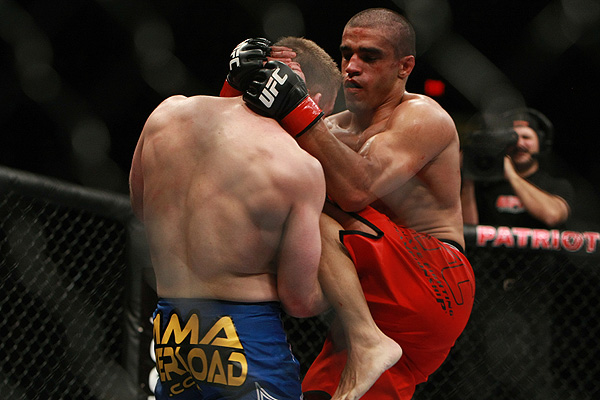 Thiago Tavares is headed down the scale for his next UFC appearance. | Dave Mandel/Sherdog.com

UFC officials Friday announced the contest, which will take place Aug. 16 at Cross Insurance Center in Bangor, Maine. The card will be anchored by a light heavyweight bout featuring Ryan Bader and Ovince St. Preux.

Tavares has been fighting under the Zuffa banner since 2007, accumulating a 10-5-1 record along the way. The Brazilian has not seen action in 2014 following a positive test for the banned substance drostanolone. The 29-year-old failed the test after a brutal knockout at the hands of Khabib Nurmagomedov at UFC on FX 7. He now re-enters the fray at 145 pounds.

Peralta has suffered only one defeat since signing with the UFC in 2011. The Team Xplode product was last seen May 31 at “The Ultimate Fighter: Brazil 3” finale, where he took home a split decision victory over Rony Mariano Bezerra. “Problems” has had no problem picking up the finish throughout his career, keeping the fight out of the judges’ hands in 15 of his 18 victories.