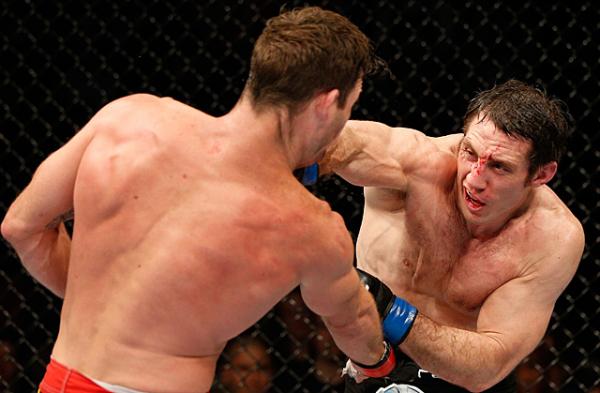 
Tim Kennedy could not have implemented his game plan any better.

Kennedy leaned on takedowns, sublime topside grappling and a series of overhand rights in beating Michael Bisping by unanimous decision in “The Ultimate Fighter Nations” Finale headliner on Wednesday at the Colisee Pepsi in Quebec City, Quebec, Canada. Kennedy (18-4, 3-0 UFC) swept the scorecards with 49-46, 49-46 and 50-45 marks.

“I finish fights. I didn’t finish tonight,” Kennedy said. “I hit Mike with my best shots. Things weren’t clicking, so my hat’s off to him as an opponent. I have great respect for him. I have a long way to go, and I’m still getting better with every fight.”

Bisping (24-6, 14-6 UFC) from the start appeared to be a step behind the Jackson-Wink MMA representative. Kennedy secured takedowns and transitioned to full mount in the first, third and fifth rounds. While he never seemed close to a finish, he succeeded where so many others had failed and kept “The Count” bottled up beneath him.

Kennedy found the necessary energy in the critical fourth round. Unable to ground Bisping, he instead turned to his fists and had “The Ultimate Fighter” Season 3 winner on his heels with repeated overhand rights. Needing a finish, Bisping failed to muster meaningful offense when he needed it most in round five. There, Kennedy mounted him twice to cement his fourth straight win.

“I’m furious but not at Mike in any way,” Kennedy said. “I hit [him] with my best shots. I have nothing but respect for [him].”

Noke (20-7-1, 4-3 UFC) was effective in the standup department -- a front kick to the body was his weapon of choice -- but spent too much time on his back. Cote recorded takedowns in all three rounds, battering the Australian with elbow-laced ground-and-pound. Noke saw his best opportunity come and go in the second round, where he countered a takedown with a perfectly timed knee that staggered Cote and left him with a cut to the scalp. The 34-year-old Montreal native survived the blow, cleared the cobwebs and remained true to his game plan.

“Wrestling has always been my weakness, and I knew it,” Cote said. “I’m 34 years old, but I feel better than ever. I had a great camp. It was my hardest camp ever. I’ve got a great team.”

Cote sealed it late in round three, as he struck for another takedown and lit into Noke with elbows from top position, one of which drew blood from the Aussie.

“I hit him with everything I had, and he just looked at me,” Noke said. “I think I even broke my hand in the first round I was hitting him so hard.”

Theodorou (9-0, 1-0 UFC) weathered his fellow Canadian’s initial blitz, drained him of his reserves and went to work. By the end of round one, Westcott was a spent force. Theodorou greeted him with multiple takedowns in the second round, battering the 29-year-old with punches and knees. Eventually, he moved to mount and let loose with his ground-and-pound. An accumulation of punishment left Westcott virtually defenseless and led referee Philippe Chartier to intervene.

“This is an amazing thing,” Theodorou said. “This is the greatest moment in my life. I can do it all. I got a little flak over the Internet, calling me a cage-humper of sorts, but I think this proves that I kick ass.”

Laprise always seemed to be a step ahead of the judo black belt. Aubin-Mercier secured takedowns in the second and third rounds, only to have to his determined counterpart return to his feet. Laprise -- who targeted the legs, body and head throughout the 15-minute scrap -- rang the 25-year-old judoka’s bell with a multi-punch combination in the third round and closed with a flourish, swarming Aubin-Mercier with punches in the waning seconds.


American Top Team’s Dustin Poirier put away “The Ultimate Fighter” Season 14 semifinalist Akira Corassani with second-round punches in a featherweight showcase. Corassani (12-4, 3-1 UFC) succumbed to the blows 42 seconds into round two, his three-fight winning streak a thing of the past.

Victory did not come easily for the heavily favored Poirier (16-3, 8-2 UFC). Corassani dropped the hyper-aggressive world-ranked featherweight to a knee with a left hook in the first round and had him on wobbly legs for several moments.

“I’m not sure what he hit me with, but I was definitely hurt pretty bad,” Poirier said. “I heard his corner yelling [that I was] hurt, but I just tried to have my best poker face. I thought he was going to come in for the kill, and I was going to load up my left elbow, but he didn’t press too hard and I recovered pretty quickly.”

Poirier turned the tide late in round one, as he drove the Swede to the mat and threatened him with a Peruvian necktie. Less than a minute into the second round, Poirier followed a left cross with a right uppercut to the nose. The pain short-circuited Corassani and sent him to the base of the cage in retreat. There, Poirier finished it with a final volley of unanswered blows.

“[I hit him with the] cross and then stepped into the uppercut,” Poirier said. “It looks like it landed right on the nose, and I know he just had nose surgery. He just told me I broke his nose with the uppercut. You could tell he wasn’t really rocked from the uppercut, but he felt the pain, I guess, and he [went] down.” 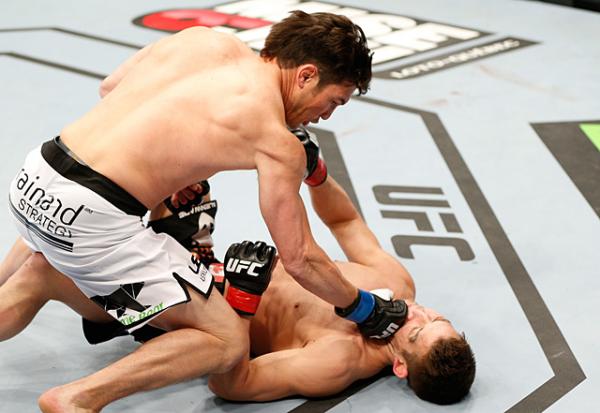 Photo: Josh Hedges/Zuffa/UFC/Getty
Noons destroyed Stout with his hands.
Former EliteXC champion K.J. Noons knocked out Sam Stout with a searing right hook and follow-up ground strikes in the first round of their undercard tussle at 170 pounds. Noons (13-7, 2-1 UFC) finished the Canadian 30 seconds into round one, winning for the second time in as many outings.

Stout (20-10-1, 9-9 UFC) had never been knocked out in his 30 previous professional bouts. Noons ducked out of danger and fired the right hook over Stout’s outstretched left, fist meeting jaw in a violent collision. The Shawn Tompkins disciple collapsed where he stood and could not defend himself against the subsequent barrage.

Kaufman came out of the gate firing multi-punch combinations and never slowed down. She blasted Smith with repeated right hands, mixing in knees to the body and kicks to the leg at various points. Perhaps caught off-guard by the relentless pressure Kaufman applied, Smith (6-5-1, 0-1 UFC) failed to establish a foothold in the match. Kaufman put the finishing touches on her first UFC victory in the final minute of round three, as she scored with a trip takedown and some nice ground-and-pound.

A replacement for the injured Amanda Nunes, Smith has lost three of her last four fights.


Former Maximum Fighting Championship titleholder Ryan Jimmo knocked out Sean O’Connell with a straight right and follow-up punches in the first round of their undercard battle at 205 pounds. A replacement for Steve Bosse, O’Connell (15-5, 0-1 UFC) met his end 4:27 into round one.

Jimmo (19-3, 3-2 UFC) struggled to solve the Utah-based light heavyweight’s approach early on, as O’Connell pinned him to the cage and scored with short punches. After a restart, Jimmo unleashed his right hand, trailed the dazed O’Connell to the canvas and knocked him unconscious with a series of standing-to-ground punches.


Takedowns and heavy ground-and-pound lifted “The Ultimate Fighter” Season 8 semifinalist George Roop to a unanimous decision over Dustin Kimura in a preliminary bantamweight affair. All three cageside judges scored it for Roop (15-10-1, 5-6 UFC): 29-28, 30-27 and 29-26.

Outside of a second-round hiccup during which the 24-year-old Kimura (11-2, 2-2 UFC) moved to his back, Roop was in control. He secured multiple takedowns and exacted significant damage from top position. In the third round, the Apex MMA export raised a grotesque swelling on the left side of Kumura’s face with a well-placed and exquisitely executed elbow.

Roop, 32, has won three of his last four fights.


In his first appearance in more than a year, Tristar Gym’s Mark Bocek eked out a split decision over MMA Lab export Mike de la Torre in a competitive undercard duel at 155 pounds. Two of the three cageside judges saw it for Bocek by 30-27 and 29-28 scores; a third cast a dissenting 29-28 nod in favor of de la Torre, who replaced the injured Evan Dunham on short notice.

Bocek (12-5, 8-5 UFC) did his best work in rounds one and three, where he staggered the newcomer with overhand rights and controlled the distance with relentless clinches and takedown attempts. De la Torre (12-4, 0-1 UFC) refused to go quietly, however, as he chewed on the Canadian’s face with jabs, hooks and effective counterpunches; he did a majority of his damage in the second round. Bocek sealed it with a strong push late in round three, where he transitioned to the Arizonan’s back and framed up a rear-naked choke as the horn sounded.


Takedowns, ground-and-pound and a suffocating top game drove Tristar Gym’s Nordine Taleb to a unanimous decision over Vik Grujic in an undercard battle at 185 pounds. All three cageside judges scored it 30-27 for Taleb (9-2, 1-0 UFC), who won for the eighth time in nine appearances.

Grujic (6-3, 0-1) could not stay upright. Taleb struck for takedowns in all three rounds, tearing into the Aussie with short punches and elbows. The Bellator MMA veteran opened a horrendous vertical gash on Grujic’s forehead with one of those elbows in the closing seconds of round three, punctuating a one-sided victory in his Octagon debut.


Richard Walsh leaned on timely takedowns and a punishing clinch game, as he captured a unanimous decision from fellow Australian Chris Indich in a preliminary welterweight clash. Walsh (8-1, 1-0 UFC) swept the scorecards by identical 30-27 marks.

Indich (5-2, 0-1 UFC) was never a factor. Walsh secured multiple takedowns in the first round and hit the accelerator in the second. There, the bearded 25-year-old brutalized Indich with close-quarters punches, knees and standing elbows, overwhelming the former Integrated Combat Championship titleholder against the cage.

Walsh resumed his assault in the third round, where he struck for another takedown and unleashed his strikes in the clinch. He has won his last six fights.


Superior standup and airtight takedown defense carried Mitch Gagnon to a unanimous decision over “The Ultimate Fighter” Season 18 alum Tim Gorman in an undercard scrap at 135 pounds. All three cageside judges scored it the same: 30-27 for Gagnon (11-2, 3-1 UFC), who has rattled off nine wins in 10 appearances.

Gagnon attacked at all levels, peppering the American’s legs, body and head with kicks, punches and knees. The 29-year-old Canadian mixed in multiple guillotine choke attempts and delivered a pair of third-round takedowns. The defeat halted a three-fight winning streak for Gorman (8-3, 0-1 UFC).