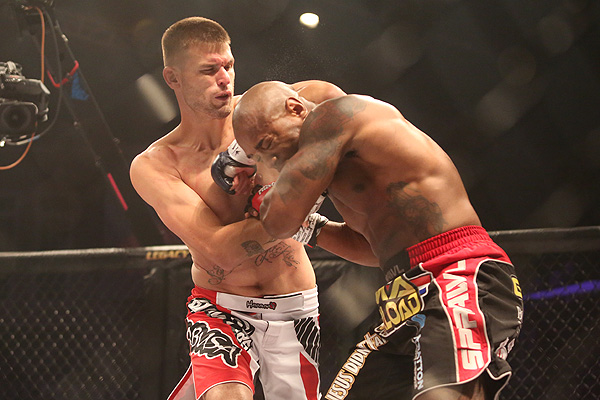 Tim Means' elbows forced Pete Spratt to call it a day on his MMA career at Legacy FC 23 | Andy Hemingway/Sherdog.com


Tim Means did not disappoint in his first fight since receiving his UFC release, as “The Dirty Bird” sent Pete Spratt into retirement with a first-round knockout at Legacy Fighting Championship 23.

Both men looked sharp early in their welterweight affair from the Cowboys Dancehall in San Antonio, Texas, though neither man could readily find his range until Means measured his man and delivered a violent elbow just over the top of Spratt’s right shoulder.

The blow landed flush behind Spratt’s ear, producing an audible smack and causing “The Secret Weapon” to short circuit. As one UFC veteran fell face-first to the canvas, the other pounced mercilessly, finishing the job with a hailstorm of punches that relieved Spratt of his consciousness 2:24 into the fight.

“I’m super happy to be here. Pete is a legend,” said Means, now 19-5-1. “I was trying to bait him into stuff, but he was doing the same thing. It’s chess in here. I just happened to land a big elbow, and I went for the kill.”

Following his defeat, Spratt told his hometown fans that he would now hang up his gloves. The 42-year-old San Antonio resident leaves the cage with a career record of 25-23, with 22 of his victories coming via knockout or submission.

“You’ve probably seen the last of Pete Spratt,” said the veteran. “Thanks, everybody, for coming out, but I had four guys win tonight, so it looks like it’s going to be better for me to be coaching than to be getting in here at 42 years of age.”

Leonard Garcia scored an exciting, third-round submission victory over Nick Gonzalez in the evening’s co-main event, forcing “The Ghost” to tap out to a rear-naked choke with just 17 seconds remaining in the bout.

Garcia opened up early in round one, hurting Gonzalez with a pair of hard right hands before running into a counter straight that briefly put him on the canvas. Both men continued to land hard and heavy shots throughout the contest, with Gonzalez ripping off clean body punches while “Bad Boy” targeted his lead leg with kicks.

“It was a flash knockdown,” said Garcia. “He took my legs out from under me, and I was happy. I knew it was one of those where I wasn’t going to be dizzy for a while.”

Gonzalez, who came in seven pounds overweight for the featherweight contest, showed serious toughness by surviving a second-round knockdown before absorbing the brunt of a Garcia head kick later in the frame. The UFC veteran’s ground game would prove to be the deciding factor in the final period, however, as Garcia took his opponent to the canvas and secured his back before cinching the RNC. 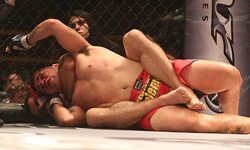 K. Mills
Garcia gave the crowd its money's worth.
Richard Odoms notched a methodical unanimous decision victory over Bellator veteran D.J. Linderman in their heavyweight attraction, stuffing “Da Protege’s” continual takedown attempts while hurting him with inside low kicks en route to securing scores of 30-27 across the board.

Rodrigo Pinheiro scored a first-round submission over Joseph Daily in their welterweight contest, handing his fellow Texan his fifth career defeat. Competing for the first time in three years, Pinheiro caught a low kick midway through the round and put Daily on the mat, quickly securing back control and sinking in a fight-ending rear-naked choke at 3:46.

Returning from a four-year absence, Tessa Simpson used superior technical grappling to repeatedly take the back of previously unbeaten Paulina Granados and threaten with rear-naked chokes, cruising to three 30-27 scorecards in the 105-pound contest.

Flyweight Carlos Vergara caught fire against Jonathan Ramirez, landing flurries of two-handed punches until a big right hook and subsequent pounding put Ramirez away at 2:43 of the first round.