BIRMINGHAM, Ala. -- Tim Sylvia went down like a giant California redwood.

Cut down by an overhand right from 1988 Olympic boxing gold medalist Ray Mercer, the former UFC heavyweight champion fell to his back in slow motion and ate two brutal right hands on the ground as a stunned sparse crowd looked on in amazement. The blows brought an end to the Adrenaline MMA 3 “Bragging Rights” main event in just nine seconds on Saturday at the BJCC Arena.

Beaten by a man who lost an exhibition bout to Kevin “Kimbo Slice” Ferguson two years ago, Sylvia (24-6) entered the match at 311 pounds. He landed a leg kick out of the gate, which only seemed to spur Mercer. The 33-year-old Miletich Fighting Systems product has lost three fights in a row, and his days as an elite heavyweight appear numbered at best, over at worst. It took him several moments to rise to his feet, still groggy from the punishment he absorbed.

His bout with Mercer (1-0), originally booked as a six-round boxing match, was changed to an MMA-rules fight earlier in the week.

“Everything was against me,” said Mercer, who called out Eric “Butterbean” Esch after the emotional victory. “I whooped that ass.”

The co-main event saw Jeremy Horn use a methodical and precise attack, as he slowly exposed weak spots in the armor of the talented but inexperienced Chris Davis.

Horn (81-19-5) pushed into the clinch, secured a double-leg takedown and went to work on the mat. The one-time UFC light heavyweight title challenger mounted Davis, secured back control and opened a cut with an elbow from the top as his opponent struggled to recapture half guard. More strikes from Horn forced Davis to yield his back again. Horn sank the rear-naked choke for the finish, as Davis tasted defeat for the first time as a professional. 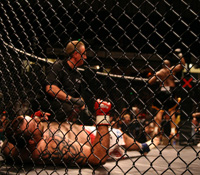 Fred Beeson/Sherdog.com
Ray Mercer stopped Tim
Sylvia with a right hand.
The victory snapped a three-fight losing streak for Horn, who had not competed since his unanimous decision loss to Rousimar Palhares at UFC 93 in January.

In his first appearance since being cut by the UFC, Rich Clementi toyed with Sasuke Zapata before finishing him with an arm-triangle choke 4:18 into the first round.

Clementi (33-14-1) outmaneuvered the slippery newcomer, employed a superior top game and mounted him twice. Zapata (0-1) escaped the first mount, only to have the savvy Clementi cast an ominous smile as he stood above him. Clementi swarmed his grounded foe, mounted quickly and dropped punches until Zapata surrendered his back. As he turned into Clementi, Zapata found himself caught in the arm-triangle. There was no escape, and the tapout came soon after.

“I appreciate him stepping up,” Clementi said.

Meanwhile, 2007 NAIA national wrestling champion John Salter demolished UFC veteran Roberto Traven, as he stopped the 40-year-old Brazilian on strikes 2:15 into round one.

Salter (2-0) stormed out of the gate, fired punches with reckless abandon and never allowed Traven to find his comfort zone. The two-time Brazilian jiu-jitsu world champion could not get the fight to the ground on his terms, where his world-class grappling skills might have made a difference. Salter was patient in his pursuit following his early opening burst, dropped Traven (6-4-1) with a series of punches and left him momentarily unconscious with strikes on the ground. Traven’s first MMA appearance in more than four years was a forgettable one.

Carrying his hands low, Jordan (45-12-2) dared Zapata to trade from the start and waded fearlessly into exchanges. A veteran of nearly 60 fights, the 30-year-old kept Zapata on the defensive, backed him into the cage and moved in for the kill. He landed a crushing body shot that left his opponent wounded and backpedaling. Jordan then flurried against the cage, and Zapata (0-1) collapsed under the punishment, falling face first onto the black canvas. Sensing the end was near, Jordan finished off Zapata with a couple of well-placed knees to the body.