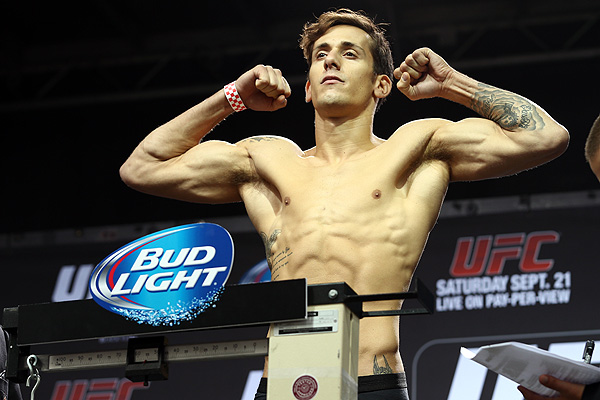 Mike Ricci is set for his post-UFC debut next month. | Dave Mandel/Sherdog.com

TFC officials Tuesday announced the news, revealing that UFC veterans Mike Ricci and Jorge Gurgel will do battle in the evening’s main event at Memorial Hall in Kansas City, Kan. The co-headliner will also showcase a pair of Octagon alumni, as Matt Riddle will square off with Michael Kuiper. Prior to the main card broadcast, the evening’s preliminary card will stream live on CBSSportsNetwork.com.

Ricci, 27, advanced to the finals of “The Ultimate Fighter 16” before stumbling against Colton Smith at the live finale. Though the Canadian would rebound with a victory over “TUF: Smashes” finalist Colin Fletcher, Ricci was outpointed by Myles Jury this past September, prompting the UFC to release “The Martian” from his contract.

Gurgel has lost six of his last eight and has not competed since January of last year, when he was outpointed by Adriano Martins and subsequently cut by Strikeforce. The Brazilian jiu-jitsu black belt owns 10 of his 14 victories by way of submission and picked up his last win in March 2011, tapping Billy Vaughan with a guillotine choke in just 44 seconds.