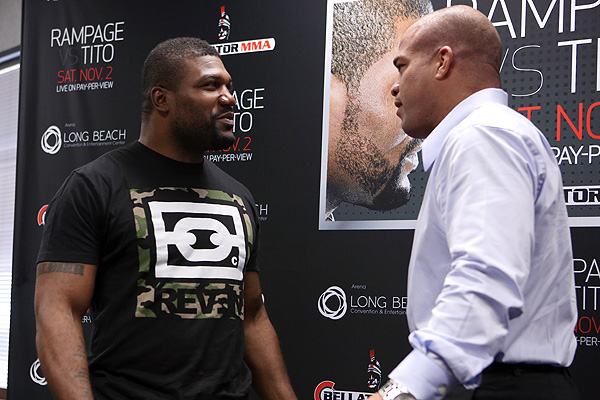 The pay-per-view showdown between Tito Ortiz and Quinton Jackson has been postponed. | Dave Mandel/Sherdog.com


Bellator’s pay-per-view debut has been postponed due to an injury to Tito Ortiz.

The former UFC light heavyweight champion has suffered a “fractured neck injury,” according to an official statement from Bellator, which forced the Viacom-owned organization to scrap a planned Nov. 2 main event between Ortiz and Quinton Jackson.

Originally intended for pay-per-view, the event will now air in its entirety for free on Spike TV, headlined by a lightweight title rematch between Michael Chandler and Eddie Alvarez.

“I’ve said it since the day we announced the fight that Rampage vs. Tito was a fight I had wanted to see for years, and it’s unfortunately something I’m going to have to continue to wait to see,” said Bellator CEO Bjorn Rebney. “After sitting down with our team and partners, the decision was obvious: give the greatest MMA fans on earth this amazing show live and free on Spike.”

The event takes place at the Long Beach Convention Center in Long Beach, Calif., and will also see Pat Curran defend his featherweight title against Daniel Straus, while Muhammed Lawal and Emanuel Newton rematch over the interim light heavyweight title.

Ortiz has long battled neck and back issues, undergoing neck surgery in 2010. The UFC Hall of Famer retired last year on the heels of six losses in his last seven fights but announced his intention to return to the cage this past July. The 38-year-old most recently competed in July 2012, dropping a unanimous decision to Forrest Griffin in their rubber match at UFC 148.